Use of controlled drains is spreading in Ontario. 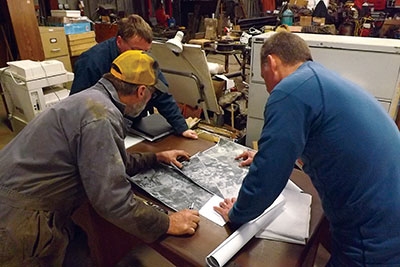 On flat cropland, controlled drains may become the new norm in Ontario, replacing conventional tile drainage on many of the province’s farms. The flexibility of controlled drainage delivers benefits for farmers and the environment that standard drainage cannot offer, and the use of these systems is spreading accordingly.

Controlled drains have been studied at the Agriculture and Agri-Food Canada (AAFC) research station in Harrow, Ont., for two decades and some farmers in Essex and Kent have already installed them on their land. “This practice is somewhat common in that area because the land is very flat there,” notes Ken McCutcheon, owner of McCutcheon Farm Drainage Ltd. in Thorndale, Ont. “The Americans in various states have really embraced controlled drainage as well. However, there are not many areas where it works well in Ontario because it totally hinges on flat topography.”

Earlier this year, McCutcheon (who has five employees in the field plus office staff at his 37-year-old business) installed two controlled drains on the farm of Henk and Annie Van Den Berg in Lucan, Ont. The project was spearheaded by Brad Glasman, co-ordinator of conservation services, and Craig Merkley, conservation services specialist, at the Upper Thames River Conservation Authority (UTRCA), along with Andrew Jamieson, senior water management engineer for AAFC. Each controlled drain covers a five-acre field. “It was an ideal site for this project as it was very flat,” McCutcheon says. “That’s a key factor in making this sort of controlled outlet work. It allows you to control the water table within 12 inches.” He notes that if there are elevation changes in a field, the installation of more controlled drain structures would be required to control water flow, and you end up with structures in the field instead of just at the outlet at the edge of the field. This interferes with planting, harvesting and so on.

Each controlled drain, placed just before the outlet, consists of a plastic tube 45 cm wide and almost two meters long integrated with the existing drainage tile. Inside each tube are vertical plastic panels that can be pulled up to let the water flow or pushed downward to stop it. Excessive rainfall can cause water to be pushed up and over the panels and flow out, so additional panels must be added to block water flow, if desired.

The system is meant to be left open in the spring and fall to drain the field, and closed during the summer to retain water. It is designed to allow faster drying of fields in the spring so that crops can be planted earlier, and to conserve the water from summer rainstorms. This year, the Van Den Bergs got a large rainfall at the end of July and closed the two controlled drains. “Water ran through the controlled drains for about a day,” says Henk, “and through the conventional drains on the rest of the farm for four days, which is a substantial amount of water loss in comparison.”

Environmental benefits
Keeping nutrient-rich water in the field instead of having it flow away, as it does in a conventional tile drainage system, is not just better for crops and farmers. It’s also, as Glasman notes, better for the environment and human health. High levels of phosphorous from fertilizer, for example, can lead to algae blooms in Lake Erie. Nutrient runoff from farms also contributes to generally poorer water quality in creeks, rivers and lakes in Ontario, including the Great Lakes. The cleaner water provided by controlled drainage therefore benefits all organisms, from invertebrates to birds to human beings.

Glasman, Merkley and Jamieson estimate that about 80 to 90 percent of the phosphorous and nitrogen in a field will stay put with controlled drainage compared to what would have been lost into the watershed with conventional tile. Monitoring equipment to measure nutrient and water outflow from the Van Den Bergs’ controlled drainage fields, as well as their regularly tiled fields of a similar size and topography as a control, were expected to be in place by October. Jamieson says it’s a three-year project and will involve year-round monitoring.

Measuring benefits
“As far as how the system is working so far, it’s early days yet,” says Merkley. “We are still learning the drainage characteristics of the site and how the system is responding to rain events.” He says there are no plans at the moment to test the system on other fields, but they may look at the feasibility of automating the stop panels, tying in the raising and lowering of the panels to the amount of rainfall received. “We’re not sure it can be done, but there are plans to investigate the idea,” Merkley notes.

In addition to needing flat topography for controlled drains, McCutcheon says newer tile drainage systems – with pipes that are closer together than in older systems – make controlled drains much more effective. “In older systems, the spacing of the tile is wider and you’re backing the water up in those pipes with the water level varying because of the distance,” he says. “In newer systems, the tiles are closer and you have more pipes in the ground with a more uniform water table, so with controlled drains [incorporated with those systems], you will more evenly distribute and store water.”

In terms of the economic benefits that controlled drainage may supply on the Van Den Berg farm, Henk says, “We’ll have to wait for harvest to see how much better the corn yield will be, but we had a dry August, so it should make a difference.” Glasman says yields should be able to be increased by 10 to 15 percent over time with a controlled drain system. The controlled drainage structures are approximately $700 apiece plus installation and are available from some of Ontario’s largest drainage material suppliers. When a farmer would achieve cost return depends on a few factors. Each year is different in terms of how much water conservation matters (how dry it becomes) in crop yield, weather patterns, the price farmers get for their harvests and so on.

However, in these times of increasing drought conditions, return on investment for controlled drainage may be swift – as may be its spread in flat parts of Ontario and beyond.

Related
The relatively new world of bioreactors
Managing runoff
How to tile a bin yard for drainage
Learning curve: controlled drainage on a slope