The development of bioreactors could alleviate many of the pollution issues from farms to waterways. 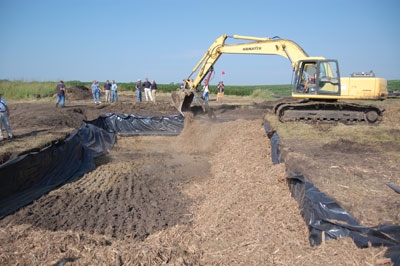 A bioreactor is essentially a buried trench For quite a few years farmers and drainage contractors have been hearing about pollution issues in the Gulf of Mexico.

For quite a few years farmers and drainage contractors have been hearing about pollution issues in the Gulf of Mexico.

There have been calls for farmers to do more to control their use of inputs and an alarming amount of negative press aimed at drainage contractors, merely for installing drainage tile for much of the past two to three years. And not to be mistaken, the pollution problems at the mouth of the Mississippi River, and along other waterways across the US, are in fact, serious and must be addressed. Yet the truth is, there is an overwhelming amount of research that proves drainage is a tremendous asset to the farmer. Furthermore, as the world’s population continues to grow, there is greater demand for corn and soybeans, and that means continued use of inputs in order to boost yields.

The good news is, there is a solution; one that is feasible, workable and the latest research indicates it can reduce nutrients by as much as 60 percent. The development of bioreactors is the latest innovation that has shown significant potential to curb some of the concerns regarding nitrate pollution.

Basic designs
In its simplest form, a bioreactor is a buried trench which is filled with some sort of carbon substrate – usually wood chips, although there are other options. The wood chips provide an excellent medium for the growth of micro-organisms which use the carbon source as food, and break down the nitrate in any tile water that is run through the buried biomass.

The nitrates are broken down by the micro-organisms and expelled as dinitrogen gas (N2), which is a primary – and harmless – component of the Earth’s atmosphere.

The Iowa Soybean Association has been doing a considerable amount of field research into bioreactors, joining other states such as Minnesota and Illinois. The move to introduce bioreactors has been gaining strength, especially since much of the agricultural land in north-central Iowa has been tile-drained. And being near the headlands of the Mississippi River, there has been a greater focus on trying to reduce the amount of nitrates flowing out of drains into streams and rivers that feed the Mississippi. “Getting implemented on a field scale, it’s probably been growing within the last three to five years in the Midwest,” says Keegan Kult, watershed management specialist for the association. “And only in the last couple of years has it been gaining a lot of momentum.”

The Iowa Soybean Association has taken something of a leadership role in the study of bioreactors, including participation in a Conservation Innovation Grant worth more than $350,000 from the US Department of Agriculture’s Natural Resources Conservation Service. “That’ll pay for additional monitoring on some of these bioreactors, and we’re matching some of the other funding sources up with that,” says Kult, noting that such matching of resources will pay for additional installations. “Part of the grant’s purpose is also to work with NRCS and the different stages that make it an equal and eligible practice. It already is in Iowa, but we’re still at an interim standard and we’re trying to move that standard along.”

The NRCS has administered this money as part of a three-year study and a total investment of nearly $22.5 million in conservation programs and research aimed at addressing issues that affect natural resources in the US.

For now, the focus of the Iowa project is on agriculture and working together with drainage contractors, since both groups are so well connected. “I haven’t really separated the two,” explains Kult. “I always say that we work so closely together and we work under that ‘tile drainage is necessary for agriculture’ notion, especially where these projects are focused at. Right now, we have this Mississippi River Basin Initiative (MRBI) to address the nitrates reaching the Gulf of Mexico, so it’s listed as one of the core practices there to address nitrate issues.”

It is no coincidence that bioreactors have become a topic of interest among universities, grower organizations and associations, and industry groups such as the Agricultural Drainage Management Coalition (ADMC). The pollution issue is gaining strength and coverage across much of the US, particularly along the Mississippi River, and many interests within the drainage industry are looking for answers. In the past, buffer strips were thought to be a solution to higher levels of nitrates and other pollutants; however recent research has indicated that beyond significant rain events, most water leaving fields comes through subsurface drainage systems. Furthermore, that flow almost never comes in contact with surface-level filter systems such as buffer strips.

Although the installation of wetlands is another option to offset pollution levels, it is often cost prohibitive to the farmer, with a corresponding loss of production on some portion of the field.

Involving farmers and contractors
As explained on the Iowa Soybean Association’s website (www.iasoybeans.com/environment/programs-initiatives/programs/bioreactors/basics), installation of a bioreactor means there is no adverse effect on a farmer’s field; there is no impact on yield, production or quality of the crop. From a drainage perspective, a control structure on the bioreactor ensures flow across the trench is kept at an optimum level to reduce pollution, without affecting the drainage of water off the field. During times of the year when the flow is high, excess water can bypass the bioreactor and continue its course through existing field tiles. When combined with other environmental control initiatives, such as nutrient management, bioreactors can reduce the nitrogen load between 40 and 60 percent.

As for the lifespan of a bioreactor, the wood chips can last as long as 20 years, depending on the consistency of the flow of water from the drainage tiles. “The more consistent flow you have through that bioreactor, the longer-lasting that carbon source is going to be,” says Kult. “It’ll get spent faster the more you get through the wet-dry cycles or if they’re dry, the faster that carbon will decompose.”

Some of the other advantages cited by the Iowa Soybean Association include:

That last point is especially important, and Kult acknowledges the need to get drainage contractors to be confident in installing bioreactors is just as vital as convincing growers such an installation is a benefit to them. “Part of the grant is also to get education material out there, along with training days, so that contractors would be comfortable recommending a bioreactor to a landowner,” says Kult. “Then it’s a matter of adding a piece of marketability to the contractor on how to install the bioreactors.”

That is one place where ADMC can help. In 2011, the organization held a certification class for bioreactors, and Kult believes there will be more to follow for 2012. “Once they have one installed, I think contractors are fairly confident on how to do the work,” he notes. “And once you get the plan (for the bioreactor), it’s pretty straightforward on how to install it, but as of right now, it’s probably not too high on a contractor’s priority list with as much other work that they have going on at the same time.”

Monitoring mercury contamination
According to monitoring of bioreactor demonstrations in other states, contamination from methyl mercury (MeHg) can be a problem. And while analysis of soils has not found the same levels of background mercury that exists in other states, it is being monitored nonetheless. Stop logs in the control structures can be adjusted to get an appropriate flow rate that will not fully reduce nitrate levels, but will leave about one to two parts per million in treated water. This design adjustment will limit sulfate reduction in the water, which occurs after complete nitrate removal. That affects sulfate-reducing bacteria, to the point where it also reduces the potential for methylation of any mercury. Further monitoring of the water flow will ensure nitrates in the treated water area not completely depleted.