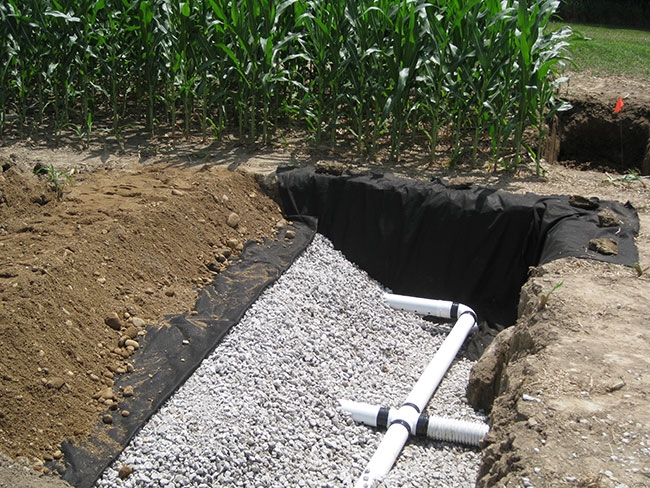 Currently Researchers are in agreement; too much phosphorus is finding its way into field tile.

Researchers are in agreement; too much phosphorus is finding its way into field tile. But rather than demand a moratorium on tile drainage installation, many are suggesting more practical drainage solutions for the agricultural industry.

The problematic algal blooms that are plaguing Lake Erie are being fed by high concentrations of phosphorus, particularly between March and June each year. Although there are many contributing factors to the growing problem, the timing suggests agricultural sources may be significant. After heavy rains in the spring of 2011 spawned the largest algal bloom in Lake Erie’s history, the International Joint Commission, which was created by the Boundary Waters Treaty to prevent and resolve disputes between Canada and the United States, formed the Lake Erie Ecosystem Priority (LEEP). In a report released last year, the organization identified that non-point sources (which include agricultural operations) truly are contributing more than 50 per cent of incoming phosphorus loads. Douglas Smith, a soil scientist working with the United States Department of Agriculture’s Agricultural Research Service (USDA ARS) in Temple, Texas, has a dominant interest in phosphorus transport. Between 2004 and 2013, he was involved in research that aimed to clarify the impact of conservation farming practices on the Lake Erie basin, and found several undesirable effects on the amount of phosphorus entering the watershed.

“Be aware that drainage may have a target on its back,” he warns.

Both the International Joint Commission and the Ohio Phosphorus Task Force set phosphorus loading reduction targets of 39 per cent and 37 per cent respectively in 2013. In looking for ways to make those targets a reality, Smith says he personally has already been involved in multiple studies focused on tile drainage discharge. What he was surprised to discover in research fields was that as much as 49 per cent of soluble phosphorus and 48 per cent of total phosphorus losses occurred through tile discharge.

“The water was hitting the tile much quicker than what I was expecting,” he says. “Our peak discharge in surface runoff happened at almost the exact same time as the peak discharge in the tile flow, so there’s a lot more surface connection through macropores, root channels, worm holes, and soil cracking in the region than what I had realized.”

Smith says these preferential flow paths have proven to be more pronounced in certain soil types. Kevin King, an agricultural research engineer also with the USDA ARS, but located in Columbus, Ohio, says most of the soils in Ohio are poorly drained and couldn’t be farmed without tile. They also tend to be soil types that are prone to developing preferential flow paths.

“We did a review article for the Journal of Environmental Quality and the fine textured clay soils will have more losses than your sandy soils due to preferential flow paths, even though phosphorus will bind to those clay particles,” King says. The fact that clay binds phosphorus only further complicates the problem as farmers increase fertilizer rates accordingly. King notes that if farmers in Ohio were applying phosphorus fertilizers through subsurface placement, this may not be as much of a problem, but the most common practice still seems to be broadcast application. “If we have preferential flow paths that develop in fine texture soils, then any water that migrates into those is carrying that rich phosphorus off the surface, into the tile.”

North of Lake Erie, subsurface application of phosphorus seems to be more common. Merrin Macrae, an associate professor at the University of Waterloo in Waterloo, Ont., together with a team of surface-water chemistry students and the Ontario Ministry of Agriculture, Food and Rural Affairs (OMAFRA) recently concluded a study of field surface runoff and tile systems effluent from Ontario cropland.

Between May 2012 and April 2013, this research team demonstrated that although tile sources contributed 78 per cent of total runoff at one research site, surface runoff contained 81 per cent of the soluble phosphorus lost and an equal amount of total phosphorus. Their other site produced similar results. But in the first year of data at a new high clay site, tile drainage played more of a role relative to surface runoff. Macrae says that although there’s still a lot to learn, especially about the role of soil type, their research produces some clear lessons.

“Overland flow has much higher concentrations of phosphorus than our tile drainage effluent,” Macrae says. The challenge, as far as she’s concerned, is keeping that surface water from running directly into tile systems. “I’m not saying tiles are not a phosphorus source, but they seem to move phosphorus at a lower rate partly because of the soil types at our sites and how they are managed.”

For example, Macrae says it is clear a surface inlet that takes field runoff right into the tile drainage system is disastrous from a phosphorus standpoint. That’s why she’s working with OMAFRA’s Kevin McKague to promote the use and proper construction of surface water treatments such as water and sediment control basins (WASCoB). Macrae says she doesn’t think people outside of the research community have any idea just how much beneficial collaboration is currently in progress, on both sides of the border.

“The research that’s gone on for the last four or five years has very much been a collaboration between governments, farmers and researchers working together to get the right answers,” she says.

King agrees that a lot of good collaboration has gone into addressing the issue so far, but he believes meeting phosphorus reduction targets is going to require the help of even more contributors. “How we get from science to implementation is where drainage contractors, ag retailers and the governments fit,” he says. “It’s all of our responsibilities to not only learn the science, but then to relate that to the producers to get that implemented.”

King believes drainage contractors are well equipped to offer advice to farmers when installing tile systems, taking soil type and farming practices into consideration. Farmers that broadcast fertilizer and practice no-till on a high clay content field need to hear about the effects of artificially adjusting the outlet elevation of their tile. “If we raise that outlet elevation to 16 or 18 inches from the surface during the winter months, we have the potential to reduce the amount of water leaving the site anywhere from eight to 45 per cent,” he explains. During winter months, when phosphorus losses start to rise, King says drainage control can reduce the amount that’s leaving the site anywhere from 40 to 65 per cent.

King also recommends blind inlets, sometimes also called French drains, in a no-till system. Smith says they’re absolutely perfect for closed depressions and pothole sites. “Blind inlets are basically an alternative practice to tile risers,” Smith said. “We put them in at the lowest point of potholes and we got pretty good reductions for phosphorus, in the neighbourhood of 40 to 80 per cent phosphorus reduction depending on the year.” Smith says that in the comparative study conducted over six years, he found that sediment and nutrient loads were particularly improved during extreme weather conditions such as the wet spring of 2010. The study was so conclusive, it led to the development of a Natural Resource Conservation Service Standard for installing a blind inlet in Indiana. King says they’re currently looking into improving this system even further by back-filling the leach field with steel slag rather than pea gravel, which would offer greater phosphorus binding properties, but the effectiveness of these strategies is yet to be determined. King says there is still a vast amount of research to be done.

“Right now we’re putting band aids on a severed arm, just trying to stop the bleeding,” he says. “We’re going to have to stack practices and we have to understand that what works on one operation may not work on another.”

Smith agrees, noting that even now there are a number of research projects that could prove very effective. He also agrees one size certainly won’t fit all and there will potentially be lots of new practices for drainage contractors to get involved in developing.