Experimenting with controlled drainage on a slope. 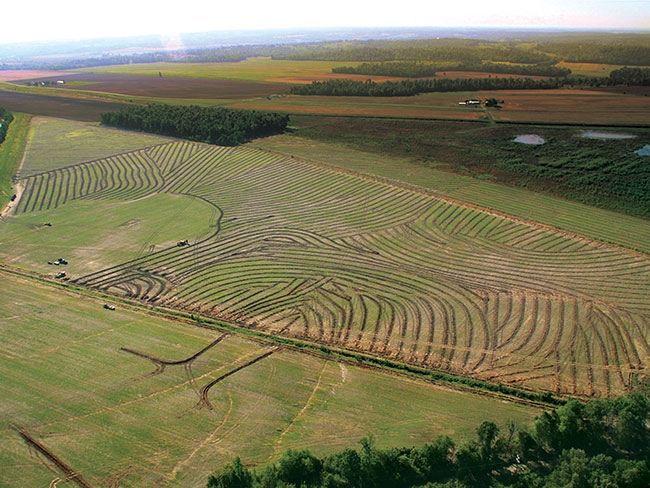 Huronview Farm’s 47 acres had been rented out to local farmers for decades when the County began working with HSCIA to rehabilitate the field. Photo courtesy of Mel Luymes. Experimenting with controlled drainage on a slope.

A new project examining controlled drainage on a slope is set to begin in Huron County, ON, this spring. In June, Huron Soil and Crop Improvement Association (HSCIA) will install a contoured drainage system in a side-by-side trial with conventionally tiled and untiled systems on 47 acres at the Huronview Demonstration Farm near Clinton, ON. Part of the installation will be offered as a demonstration for public viewing.

The contoured system is designed as a controlled drainage system, where water can be backed up in the laterals for use in subsurface irrigation and to control the rate of drainage to prevent scouring damage downstream.

The project is funded primarily by the Canadian Agricultural Partnership and HSCIA with strong support from Huron County, the Land Improvement Contractors Association, Ausable Bayfield Conservation Authority, Ducks Unlimited Canada and other partners.

Mel Luymes is working with HSCIA as the project’s primary contact. She says while controlled drainage can work well for a few Ontario farmers if they are working with flat fields, it has never been attempted in Ontario on a field with rolling ground, due to the need to run laterals on contour in order to prevent tile blow-outs from the pressure that control gates put on the system.

The Huronview project is designed by and will be installed with the oversight of AGREM, an Illinois-based company that creates contoured, controlled drainage systems.

On the first part of the field, drainage tile laterals will be installed on contour on a 0.1 percent grade with 22 control gates where laterals attach to the main, Luymes explains. “The hope is that we’re able to control the rate that the water leaves the field,” she says. Water quality and flow rates from the contoured system will be compared with the conventionally tiled system and the untiled area.

On the second, lower part of the field, three contoured terraces will be installed to capture surface runoff on a broad base to allow for cropping. “These are not berms, but a kind of contoured swale that will intercept the water and redirect it on the surface to a grassed waterway and then to a wetland,” she says.

Luymes says that where Ontario producers have been supported with loans for tiling land, American producers took advantage of similar loans for terraced systems and saw good results.

The Huronview Demonstration Farm has been a working farm for more than 100 years. The 47-acre field had been rented out to farmers for decades when the county began working with HSCIA to rehabilitate the field, planting cover crops, a grassed waterway and reducing tillage, among other measures. 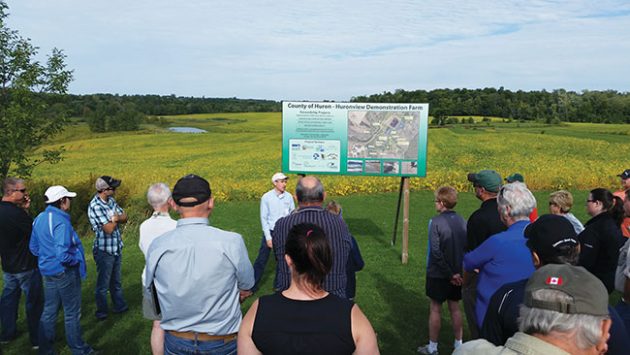 The drainage project is the perfect complement to HSCIA’s mission to innovate, research and demonstrate soil and water improvement, Luymes says. “We’re not sure if this will work here Ontario, but someone has to take the leadership to try,” she says.

Matt Williams, owner of Williams Drainage, will spearhead the installation.

“Ontario contractors have known about contoured, controlled drainage for years but everyone had the same mentality – there’s too much slope and too many geographical changes. To make it work on sloping land, you need to install a lot of control structures and gates, whereas on flatter land you need only a couple,” Williams explains. “It’s not just about installation but maintenance throughout the year, because you can’t control these structures remotely yet.”

Williams says the project will answer the most important producer question when it comes to contoured, controlled drainage systems – whether this system would be worth the extra expense.

But it will also answer a lot of other questions for contractors. Williams says there will be a learning curve for his team in terms of installation.

“Because you’re following the contour of the land the machine has to do tight turns, so we’re not sure whether that will exceed the machine’s capabilities,” he says. “If we know there will be a turn that is too much for the machine, we’ll have to design the job accordingly.”

Another question Williams hopes the experiment will answer is whether this system will be more vulnerable to blockages caused by crop roots getting into the drains. “The drains on one of these systems is going in on a flatter grade than conventional, so this could increase the risk of that happening. There’s better chance of water standing in the tile for longer periods and crop roots are looking for that,” he says.

Sediment buildup in the laterals could also be an issue due to the flatter grade, which isn’t “self-cleaning,” Williams says.

“I think there’s demand for this type of system in Ontario – not everywhere, but there are a lot of potential sites where this would be accommodated quite well,” he says. “Ultimately, it comes down to the cost versus the benefit.”

Luymes says the price tag might be higher for contoured, controlled systems, but there are possible paybacks for the environment which could help build the “social license” farmers and drainage contractors need to do their work.

In a conventional system in Ontario, depending on the soil type, laterals are typically installed every 30 feet at a depth of about 2.5 feet. “But some farmers are seeing that their drainage systems aren’t working anymore, so what they’re doing is splitting tiles and putting laterals between the existing ones,” Luymes says. That will form another part of the project; they’re comparing the rate of drainage from a 15-foot and a 30-foot system, side by side.

This is also an issue of soil health, Luymes says. “We also want to look at the importance of organic matter for infiltration and water holding capacity, as well as soil’s aggregate stability and the channels created by roots and earthworms that create the pore space for drainage. If your soil is compacted, no amount of tiling will work.”

“We’re trying to control drainage with contoured tile a small scale here in Huron County to see if it might work for the future. I know the ship has already sailed and we’ve tiled much of Ontario conventionally, so this research won’t have an immediate impact. It might be a game changer in the long run, however.”

“I do think though that terraces might be a good retrofit to a conventional system. Reshaping some contours into a field could help control erosion. I hope we can better understand how wetlands can be part controlling drainage and filtering field runoff in the future.”

The drainage demo day is set for June 15 at the Huronview Farm. Contractors, farmers and the public are invited to view the installation and participate in workshops and an industry tradeshow. Details and updates will be posted at Huronview.net.