Celebrating 40 years of innovation with Boes 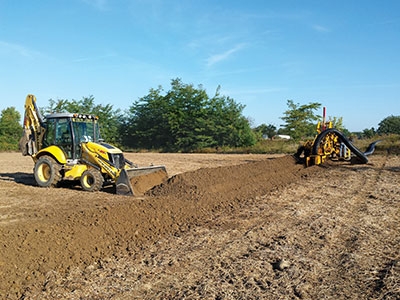 Boes Quality Drainage is a progressive company that is big on innovation. When Fostoria

When Fostoria, Ohio, farmer Lanny Boes purchased his first ditch machine 40 years ago, he had no idea it would lead to him starting a drainage contracting company.

“My first farm was really wet and needed tile in a bad way,” explains Boes. “I bought a ditch machine to do the job myself and that project ended up catching the attention of a couple of neighbors.”

Boes says he really enjoyed tiling his farm, and good thing too because one neighbor referral kept leading to another. In fact, Boes became so busy helping his neighbors that he decided to hire an employee and start Boes Quality Drainage.

Four decades later, he’s busier than ever. Boes now works with his youngest son, Corey, and two other employees. He keeps his equipment fleet small. On the tiling side, the fleet consists of only a Wolfe 250 drainage plow, a New Holland B95B backhoe and a Buckeye Super H wheel machine. As the elder Boes says, his company tries to do everything as efficiently – and as simply – as possible so there isn’t a lot of equipment hanging around.

His son Corey agrees. “When some companies arrive to tile, they show up with a couple of stringers, a plow, a ditch machine, a backhoe and a bunch of other equipment,” explains Corey. “The thing is, we’re called in to make the fields drain better. We know soil compaction is an enemy to drainage, and poor drainage causes lower crop yields. So, we minimize our footprint in the field by using less equipment more efficiently.”

The younger Boes says another example of how the company tries to minimize soil compaction is by using an onboard reel when they’re working in the field. By using the onboard reel, the drainage plow is the only piece of equipment that drives across the field for each tile line, as opposed to having an additional piece of equipment pulling a tile stringer for every tile line. With this method, Corey explains, the backhoe only has to drive out across the field when it’s time to replace the reel.

“It doesn’t seem to matter how much tile you have in the ground,” says Corey. “If the water can’t get to the tile, the tile can’t be utilized as much as they should be. [Driving less equipment across the field] really makes a difference, especially in the spring and fall when the ground tends to be softer.”

Driving innovation
Boes Quality Drainage is a progressive company that is big on innovation. As an example, the Boes family developed a patented steel trench box that removes the need for stone when installing large tile. This saves their clients both the money that would typically be spent on the stone, and the labor costs associated with handling the stone.

“When you install large diameter tile, you typically dig the trench to grade, put a little bedding of stone down, drop the tile in, and then surround the tile with stone,” explains Corey. “But with our patented steel trench box, we eliminate the cost of the stone, making the job more economical for the land owner.”

As Corey says, there are no downsides to using the steel trench box in place of stone. Rather, when you consider the cost savings and the added safety bonus that working within the structure of a steel trench box provides, it’s an easy sell for both him and his clients.

Corey, whom his father describes as the family electronics expert, has also designed an electronic sensor system for the backhoe that can tell the operator how deep the tile should be. Corey says the system is so accurate the operator can dig down to within a 1/10-inch of the tile without having to probe it.

New plow design
The Boes family and Wolfe Heavy Equipment are also working together to design a new plow that will attach as a fifth-wheel and won’t need a lowboy semi-trailer to haul it. The inspiration comes from the cost and frustration of obtaining a special overweight haul permit to move heavy plows along state highways. As Corey says, the cost of the permit, which in Ohio is over $100, adds up throughout the year, and it’s extremely frustrating to drive a route of travel that is dictated by the state but is often not direct, making it take longer to get to the customer’s site.

In Corey’s words, the dealer jumped all over the concept when his family proposed the idea of a fifth-wheel plow back in the spring.

“This is probably the first plow that has turn signals and lights on it,” says Corey, laughing. “Really, it’s a great idea that solves a lot of problems, and the dealer has told me they have another half-dozen or so other customers who want to purchase one.”

Moving forward
Corey says his passion for innovation and technology was instilled by his dad, Lanny, at a very young age. People sometimes shy away from technology but he was always brought up to believe that if technology can be used to benefit you or the customer, you should go for it.

The elder Boes looks back fondly over his company’s 40-year history, noting how much easier the job has become thanks to technology. He notes that 40 years ago the technology was grade stakes and an old ditch machine that did about 15-feet per minute.

Today his plow is equipped with a GPS system and runs at 120-feet per minute.

Lanny, who has Corey and two other sons, says he’s at the point where he’s considering reducing his involvement in the business and passing more of the responsibility for the business down to his sons.

“I’ve been really lucky over the years,” says Lanny. “I have good customers and a great family with a supportive wife. Maybe it’s time for me to start winding down a bit.”