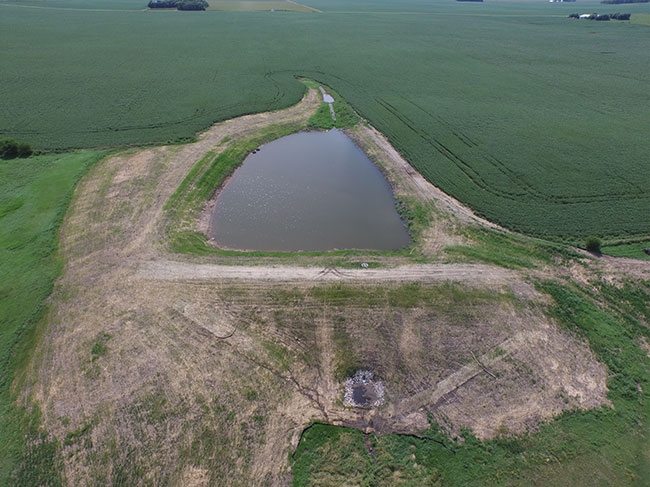 This constructed reservoir is used to store surface runoff and subsurface tile drainage water for irrigation use in southwest Minnesota – a practice referred to as drainage water recycling. An integrated system of drainage plus irrigation

Few things can make or break a cropping season like flood and drought. These two water-related events are at the core of many drainage and irrigation decisions.

Crop indemnity claims in Minnesota exceeded $160 million dollars following the 2012 drought. More recently, excessively wet periods in 2015 and 2016 affected Minnesota farmers, accounting for more than 50 percent of all crop damage claims made in the state. On the flipside, a “million dollar rain” could come in July or August, providing just enough water at just the right time to generate a bumper crop.

This type of variability in Mother Nature’s water supply is not just a Midwestern thing either. On the East Coast, drought and excess rainfall each accounted for nearly $90 million dollars in crop damage in the same year (2015) in North Carolina. Despite the state being in a relatively wet part of the country, often receiving more than 50 inches of rainfall per year, it was the driest state in the nation in 2007. This led 85 of the 100 counties in the state to declare for natural disaster relief due to the drought and resulting crop damage. Both Minnesota and North Carolina are among the 10 most agriculturally productive states in the country and with similar trends being seen during extreme weather patterns in other heavy-hitter states like Iowa, Illinois, and Indiana, drainage and irrigation systems are being looked at as important tools for farmers to manage the risk associated with too much or too little water.

An integrated system of drainage plus irrigation, called drainage water recycling, is being evaluated across the Midwest and elsewhere as a strategy for managing seasonal variations in water availability. Drainage water recycling is a practice that utilizes drainage systems to route surface and subsurface drainage water from the field, which is usually in excess during the early months of the year, to an on-farm pond or reservoir where it can be temporarily stored. Later in the summer, when water is often in high demand and rainfall alone is not sufficient to meet crop needs, drainage water that was previously stored in the reservoir can be applied to the field in the form of supplemental irrigation.

In the Midwest, installed drainage water recycling systems have shown the potential for crop yield benefits. Average corn yields managed under a controlled drainage plus sub-irrigation system increased grain yield by 19 percent in Ohio and more than 15 percent in Missouri.

Researchers in Minnesota and North Carolina have installed new experimental sites that will evaluate the performance of drainage water recycling systems in these locations. Insights from these studies will be added to a growing pool of information to better understand how drainage water recycling best fits in the landscape and where the practice can be used to support continued high-level crop production in the face of variable weather patterns and a drive for more sustainable farming practices.

Minnesota
Jeff Strock, a professor at the University of Minnesota, has been working with Brian Hicks of Nettiewyynnt Farms on drainage and agronomic studies in southwest Minnesota for 11 years. “I’ve worked with Brian for a number of years and we have been talking about something like this for a while. Given the amount of relief on-site, it seemed like there was the potential for an embankment pond to store water,” Strock says.

The site consists of a 1.2-acre reservoir capable of storing about five million gallons of water being supplied from drain tile in an adjacent field, as well as some upslope surface runoff. The total irrigated area of the research plots is about 4.5 acres. Following this study, the plan is to provide supplemental irrigation to approximately 50 to 80 acres on the farm. This works out to about 0.2 to 0.3 acre-feet of storage per acre of irrigated area. “Bigger is often better in this case, but it will ultimately come down to project costs. If you can afford to build more water storage, then this should give you some added safety during those really bad drought years,” Strock says.

The plots will include replicates of three separate treatments in a corn and soybean rotation along with a non-drained control plot. Treatments will include a conventional drainage plot that simulates subsurface tile drainage on an 80-foot spacing, controlled drainage plus sub-irrigation simulated on a 20-foot spacing, and on-surface drip irrigation where tapes will be placed on every other row. The tile drainage system within the research plots was installed at a depth of three feet. “This is shallower than what we would normally install at, but given a little bit heavier soil and the fact that we will be sub-irrigating through the tile lines, Brian and I decided to go shallow,” Strock explains.

Water from the pond will be delivered back on to the field using a pump on a floating platform, powered by a mobile solar panel array. Strock says, “For the sub-irrigation, water will be pumped directly to the water control structures installed at the tile outlet of those treatments. For drip irrigation, we are pumping water to a 6,000-gallon storage tank, which is then used to pressurize the drip irrigation lines.”

“We’re excited to see how the system will respond given drier conditions. While 2015 and 2016 were relatively wet, we did see some positive crop response on another of our research sites, which uses the drip irrigation, but we expect some bigger gains whenever we get some of those hot and dry summer conditions.”

Mohamed Youssef, a professor at NC State, explains, “This research site has an existing surface drainage channel, which is capable of storing drainage water for us. It’s fairly wide near the outlet, about 75 feet, and it seemed like a good fit for us to conduct a study on drainage water recycling.” The surface area of the pond is 1.3 acres and it stores approximately three million gallons of water. The pond will receive subsurface and surface drainage from the research field, as well as water from a contributing forested area upstream of the experimental site. With the irrigated field area measuring just over 28 acres, this will supply about four inches of supplemental irrigation per acre. The researchers expect the pond will be filled two or three times during the growing season, which would provide anywhere from eight to 12 inches of supplemental irrigation. Even a few inches of irrigation water to alleviate drought stresses during the summer months could make a big difference in crop yield. At another irrigation research site in eastern North Carolina, just two inches of supplemental irrigation in July 2016 resulted in a 20 percent increase in corn yield compared to non-irrigated treatments.

The drainage channel, which will be used for drainage water storage, runs through the middle of the 56-acre research field. The right half of the field will be drained with shallow surface ditches, roughly 18 to 24 inches deep, which will route surface runoff to the drainage channel during heavy storm events. Drainage water recycling will be implemented on the left half of the field, which will be drained using similar shallow surface ditches and subsurface tile drains installed at a four-foot depth and 60-foot spacing. A riser on one end of the treatment area will allow researchers to pump water from the pond into the subsurface tile system. “By operating a custom- designed water control structure at the outlet, we can switch between subsurface drainage and sub-irrigation modes as needed,” Youssef says.

This constructed reservoir is used to store surface runoff and subsurface tile drainage water for irrigation use in southwest Minnesota – a practice referred to as drainage water recycling.

Future research
In Minnesota, researchers will be measuring drain flow into and out of the tile system on an hourly basis. Water quality and soil water content measurements will also be collected on a weekly schedule.

Strock says, “When we compare these water measurements with crop growth and yield, we will be able to evaluate the impact of drainage and irrigation on corn and soybean systems in a heavier Midwestern soil, and in a climate that is inherently a little wetter, where irrigation hasn’t commonly been implemented,” Strock says. “Collectively, with other research being done in the Midwest region, we can gain a better understanding of the practice of drainage water recycling and where it makes the most sense.”

For Youssef, the practice of drainage water recycling is an interesting prospect for future water quality efforts, as well as for crop production. “The location of our research site – only a few miles from the mouth of the Pamlico River – emphasizes the potential water quality benefits of the practice. In a sense, we are turning harmful nutrient-enriched water into a valuable resource. Our setup will allow us to collect data at different points in the system…inflow and outflow for the pond and drainage systems. Measuring the amount of water moving through these points in the system, as well as the concentration of nutrients and sediment, gives us a more complete picture of how these systems work in improving water management and water quality in agriculture,” Youssef says. “The economic and environmental impacts of these systems are likely going to be tightly linked to annual weather patterns. Understanding how drainage water recycling responds to wet, dry and moderate years will help us determine how this practice fits into the larger agricultural landscape. We want to make agriculture more resilient to weather extremes. This will result in more stable and productive long-term agriculture and could do so in a way that protects the values held by society for environmental priorities such as water quality.”

Managing the risks associated with too much or too little water will continue to be at the forefront of many drainage and irrigation decisions being made by farmers. This new research on the practice of drainage water recycling will provide new insights for managing our water resources in tile-drained landscapes.

For additional work being done on water storage in the Midwest, visit transformingdrainage.org.