Advances in design and technology streamline the transition. 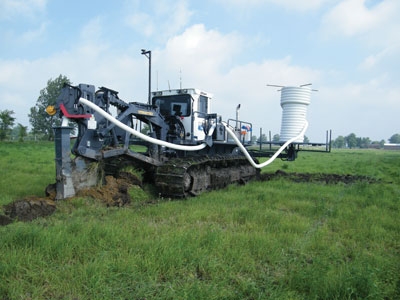 The on-board reel is a feature the Kuepfers decided on after building one themselves for their previous machine. Several new features helped Kuepfer Drainage decide on its BRON self-propelled plow

Several new features helped Kuepfer Drainage decide on its BRON self-propelled plow, which was delivered in July. More power, better visibility, operator comfort and being fitted with GPS control systems were among them.

Harold Kuepfer has been operating his service from Newton, near Stratford, Ontario, for close to 40 years. Like many Ontario contractors, his business is thriving as farmers upgrade their cropland with comprehensive subsurface drainage systems. His sons Dennis and Glen have taken on greater roles in recent years. Advancing to GPS controls has been a major step for them and it is one that Glen, who operates the plow, really appreciates. He has found the transition from a laser-based system to be fairly trouble-free, mostly a matter of learning how the technology works and discovering its benefits during operation.

The Kuepfers’ BRON machine is a model 450 with a 750 double-link plow which can install pipe to 7ft6in. It incorporates an on-board reel for pipe plus a tile puller and power feeder. The cab has two doors, arranged at 45-degree angles to provide easy access. The rear section of the power unit hood also angles towards the front of the cab so that together, they present excellent visibility for the operator and punch-perforated hood covers add to the striking visual design while reducing the weight of each panel. The cab itself is shock-mounted and has a pressurized enclosure to keep dust outside.

The operator’s seat is a suspension type, which swivels with the controls mounted within the armrests. Full non-slip walking platforms with safety rails are provided on both sides of the machine and a fold-down step is provided at the rear. A fold-down seat is also provided in the cab for occasional riders.

Power is provided by a 440-horsepower Cat diesel and track drives are independent hydrostatic through rear mounted final drives. Maximum working speed is 1.4 mph and travel speed is up to 3.2 mph. Track frames are of a new design with a sloped top plate to reduce mud buildup, a handy feature when working in frosty winter conditions. Tracks oscillate and the main frame tilts automatically to compensate for side hill work. The tracks are specified to D7 standard.

The standard plow weighs in at 76,500 lbs. For transport, the machine is 11feet wide, 11ft3in high and 36 feet long with a four-inch chute. Various options are available, like twin or single control sticks, ice picks for tracks and chutes for all sizes of pipe up to 15-inch inside diameter. A pipe crusher/cutter is also available, as is a programmable pre-heater to warm engine and transmission prior to startup. Another standard feature is grease banks, which make lubrication easier for both the track frame and plow pins.