Features Contractor at Work
Part of the solution 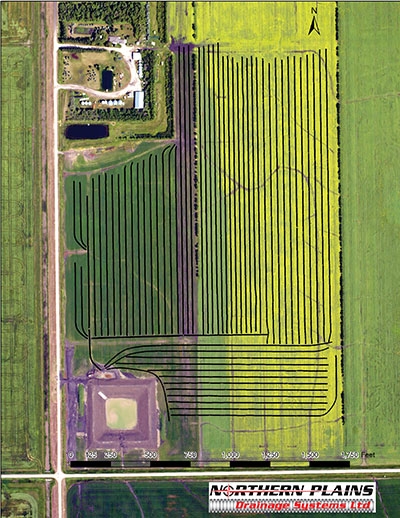 Across Canada, there are considerable challenges in managing our surface water quality. One factor that can greatly affect this is agricultural nutrient runoff, and among those areas where this is a major concern are Lake Erie and Lake Simcoe, in Ontario. Nutrient runoff is also an increasing concern in areas of intensive agriculture across Prince Edward Island, a province in which 100 per cent of drinking water comes from groundwater wells.

However, the most notable of all surface water areas of concern is Lake Winnipeg. Serious eutrophication (low oxygen levels) and algae blooms are a frequent occurrence, and they are worsening year by year. The good news is that there are opportunities for drainage contractors and farmers to significantly mitigate the nutrient runoff that’s to blame, says Dr. David Lobb.

Lobb is a professor of landscape ecology in the department of soil science and a senior research chair in the Watershed Systems Research Program at the University of Manitoba in Winnipeg. In January, Lobb presented his ideas on this topic at the Land Improvement Contractors of Ontario meeting.

“Traditional responses and ideas haven’t done much to solve the problem of nutrient runoff,” he says, “so new and innovative approaches are needed, and drainage contractors can play an important role in these approaches.”

Lake Winnipeg
Lake Winnipeg is the sixth-largest freshwater lake in Canada and 11th-largest freshwater lake on the planet. It supports a $21 million-per-year inland fishery, as well as multi-million dollar recreational and hydroelectric generation industries. Its watershed is very large, spanning four provinces and four states via the Winnipeg, Red, Assiniboine and Saskatchewan Rivers.

“The runoff from all of these rivers impacts Lake Winnipeg, and the impact continues on into Hudson Bay,” Lobb explains. “The Lake Winnipeg watershed is a major source of runoff to the Arctic, which is an extremely sensitive ecosystem.” Algal blooms, which have become more frequent and more extensive in the lake in recent years, can ruin beaches, produce harmful toxins and represent an overall ecological threat. “Agriculture has had a role to play in creating this crisis and agriculture must play a role in resolving it,” Lobb states.

Flooding from snowmelt is also part of the problem – a phenomenon that is occurring more frequently these days. In the view of Lobb and many others, there is a strong linkage between snowmelt runoff, flooding and phosphorus contamination of surface waters. He says small dams have been placed in some of the creeks to hold back runoff during snowmelt and rainstorms, but their effect hasn’t been significant. While these small dams also trap sediments and some degree of some nutrients, they do not lessen nitrogen and phosphorus runoff.

Various municipal and regional governments in Manitoba have established targets over the year in order to greatly reduce phosphorus loading into the lake – targets that were to have been met through a moratorium on hog farming expansion and through the use of best nutrient management practices by farmers. Best practices include conservation tillage practices such as no-till or strip-till, which leave crop residue on the land and improve both soil and water quality through reduced erosion. However, Lobb notes that for other reasons, keeping crop residue on the surface of the field instead of tilling it in may actually result in more water contamination, not less.

“The agricultural reality is that most farmers have already adopted best nutrient management practices and there is little room left for improvement through further refinement in technology or adoption,” he says. “The existing drainage system is not highly effective as it conveys runoff downstream as fast as possible and treats water as waste. Instead, we need to realize all of the potential benefits of our water by keeping it and re-using it.”

New approaches
Lobb recommends the use of an integrated system, one that combines a drainage-retention-irrigation system for water management and a capture-recovery-reuse system for nutrient management. “We already see elements of such systems in Manitoba,” he says. “Retention dams in the Escarpment Region and restored wetlands in the Prairie Pothole Region. These enable retaining and reuse of most of the water and nutrients in most years.”

An option to accomplish this in the Lake Winnipeg region is back-flood dams (berms) similar to waffle designed dams, but with modifications, as the waffle design is not suited for agriculture. “A second option is to use the existing ditches and expand them, and temporarily blocking finger ditches (terminal main drains),” Lobb says. “Existing ditches are designed to convey runoff and have little capacity to store runoff, even temporarily.” He explains that the design of existing ditches do not provide for filtering and capture of nutrients by vegetation, nor for the harvesting of vegetation for nutrient recovery. Expanded ditches enable the retention of runoff and delay release to reduce downstream impacts, and ideally, the runoff can be used to irrigate fields.

A third option is to use the existing ditches to collect runoff and direct it to a retention pond-filter field system. “An added benefit of this strategy is increased field crop production through better drainage,” notes Lobb, “and the potential for irrigation of field crops in drought years.” This third option would definitely require the expertise of drainage contractors, he says, but he is sure that they could be involved in all three, as all solutions can incorporate better in-field surface and subsurface drainage.

Lobb acknowledges that direct on-farm economic benefits are necessary to justify implementation of these strategies. “I recognize that there are construction and maintenance costs in upstream water management, and in managing safety, salinity, weed control and invasive species such as hybrid cattails and reed canary grass in wetlands,” he says.

Future research will focus on designing and assessing areas that temporarily detain runoff within the field and disperse it more uniformly through a greater area. Lobb will also be looking at improving the practices used to sediment and vegetation from ditches and riparian areas where nutrients can build up and contribute to surface water quality problems.