This fourth-generation family business is adding another trencher and crew this summer to meet demand. 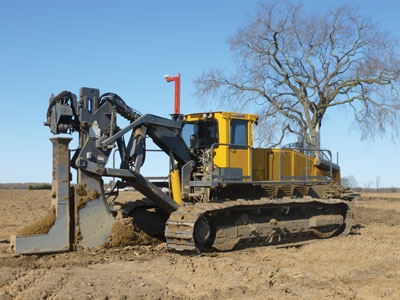 Martin Drainage currently owns a BRON trencher with a Trimble AGPS GPS system. On the day Drainage Contractor went into the field with John Martin of Martin Drainage

On the day Drainage Contractor went into the field with John Martin of Martin Drainage, the contractor was tiling approximately 60 acres just northwest of Arthur, Ont., on Indian Maiden Farm. Martin and his team had started at this site the day before and expected to be finished that day.

It was an exceptional day for a site visit, and he was eager to share insights on the drainage business, as well as discuss the history of his family business and its multi-generational attraction to agricultural drainage.

Martin Drainage was started unofficially in 1921 in Wallenstein, Ont., by his grandfather, and at that time it was solely a manufacturing business. His grandfather made tile and learned the business inside and out. Shortly thereafter, a trencher was purchased to enhance the tile sales and John’s father began to pass the company along to his sons in the early 80’s.

Since then John has had eight energetic children, and currently three of them are involved in the business in one way or another.

The Martin Drainage crew works 10 to 12 hours a day during this time of year, but most of the drainage work is done after harvest each year, with only a small minority being done before planting begins.

The company covers Waterloo, Wellington and Grey counties mostly, with a few jobs falling outside of these borders. Its offices are located in Wallenstein.

Tiling Martin style
For Martin Drainage, survey work is done by A & E Drainage. Then a preliminary design of the tile layout takes place and the job is priced out. As with most good contractors, Martin discusses options with the farmer to ensure he or she gets what they need out of the tiling, and understands what will be done and why. Martin recommends 40-foot centers as a bare minimum, adding that pricing tends to be very competitive in this area of Ontario.

The gap between planning and installation can often be more than a year, a delay that would drive service contractors in other sectors to distraction, but are the norm in the drainage business, due to time of year, weather and client requirements.

Once on site, there are between six and eight people on Martin’s crew, depending on the job at hand. Staff operate plow, excavator and backhoe, as well as string tile and make connections. When asked about finding labor to help on his crew(s), Martin acknowledges that labor can be difficult to find because operators have to be certified in Ontario. Still, he sees certification as a positive in the industry, because it provides consistency and an assurance of quality on all jobs performed in the province.

When completing a job, one final unique element that Martin Drainage is very proud to offer its clients is discing of the ditches after installation to level the uneven ground.

Martin describes agricultural drainage work as “a business full of opportunities,” and he finds it very rewarding to help farmers improve their business.  He says, “for the most part, farmers are very good to work with.”

This year, because of the unseasonably warm spring, Martin has already accomplished about half of the spring work the company usually does, having started as early as March. He states that the warmer temperatures and milder weather conditions have allowed his crew to work more evenly throughout the year. Overall, Martin Drainage does a total of about 3.5 to 4 million feet/year with one crew.

Growing pains
So why mess with a good thing? This is exactly what Martin and the participants of the family-owned business have debated the past nine months. But with some recently overcome reluctance, he has come to realize that to fill local demand, growth is in order. Martin Drainage has thus made plans to acquire a second machine this summer, and with it another work crew.

This new demand comes in part from new ground being broken in the area. With crop prices being high, farms that have traditionally been dairy, for example, are tempted to start growing cash crops as well. Much of that new land has rarely or never been used, and now needs to be drained. Finally, he adds, farmers are realizing that it just costs too much to work on wet land, and drainage can really boost the farm’s bottom line.

Martin Drainage currently owns a BRON trencher with a Trimble AGPS GPS system. “Some 70 to 80 percent of contractors are using GPS in this area,” says Martin. “It just makes sense, you can plan better and it reduces the potential for human error.” Before GPS the company used lasers to do the work. It was time consuming, but he concedes that it was just as accurate in most cases as the GPS is today.

The BRON machine that Martin Drainage owns now was purchased in October 2011, and the one he owned before that was from 2009. Martin replaces machines before they have too much wear and tear, as down time is very costly in this time-restricted business, and was especially important when there was only one machine to rely on. Both of his previously purchased machines, and the new one slated for this summer are standard BRON machines.

Despite the challenges of the drainage business, the Martins clearly enjoy the work, and what it does for the farming community. That’s why, after four generations and 85 years, they are still assisting farmers with their tiling needs.

Related
Forty-year flashback: Today’s techniques
U.K. Update: An opportune problem
An eye on the future
Protecting workers from the effects of heat