South Dakota researchers are examining the impact of drainage systems on wetlands. 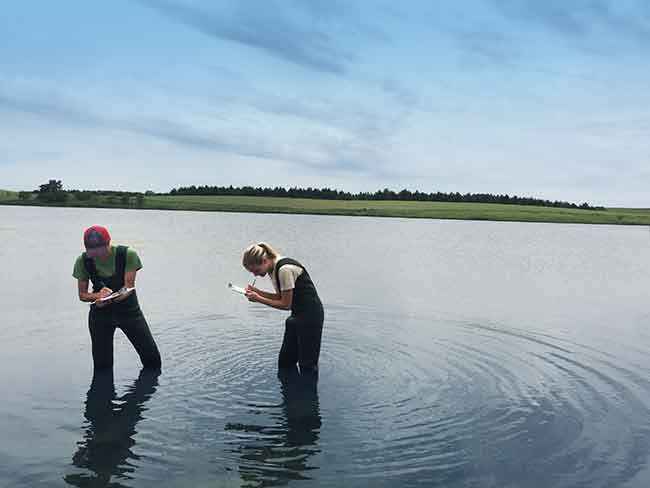 Students from the University of South Dakota collect data as part of a study to determine the impact of agricultural drainage on wetlands. When Matt Schwarz

When Matt Schwarz, an environmental contaminants specialist with the South Dakota Ecological Services Field Office for the U.S. Fish and Wildlife Service (USFW), noticed more and more farms installing drainage systems, he began to wonder what impact this might be having on the area’s wetlands.

So, he turned to Jake Kerby, an associate professor at the University of South Dakota, to study the situation.

“Because the U.S. Fish and Wildlife Service has a number of water fowl production areas, he noticed tile drains collecting in outlet points and draining right into the wetland,” Kerby says. He explains there were a variety of scenarios, including surface runoff from farms, some buffered sites and some with pipes going directly into the wetlands. “He wanted to know what impact this was having on water quality.”

To find out, Kerby and his research team selected 18 sites to study. Six receive tile input directly, six receive runoff from agriculture land and six are buffered. The team surveyed the sites and collected water quality data over the past four years to find out exactly what is coming out of the pipes.

Chemicals found
What they found, both coming out of the pipes and within the wetlands, is a higher level of two different chemicals.

One is a relatively new group of insecticides, called neonicotinoids (or neonics). Kerby hypothesizes neonics may be a culprit because they are chemically similar to nicotine, and can be lethal to insects as they can bind to neuron receptors and stay there.

“They are good for agriculture because they can apply it directly to the seed, so it is seen as an advance because not as much spraying is needed,” he adds. “In farmlands, it is underground so should be well contained, but drain tile is underground so when the seed is washed off, it precipitates down to the pipes and is carried through the pipes.”

The second chemical they discovered was selenium, which they found in higher levels at the sites with pipes from drainage systems. “Selenium is naturally occurring in South Dakota soil but through farming, a lot of it has been removed,” Kerby says. “However, deeper down in the soil, it’s still there and because they bury the pipes low, it is getting into the pipes and is carried away.”

Wetland diversity
As well as measuring what was in the water, researchers examined what isn’t in the water. “We don’t have the final analysis yet but early results indicate at our tile sites we have lower diversity and higher neonics and selenium,” Kerby says. “It could be the insecticide. It could be the selenium. It could be higher nitrogen and phosphorus.”

The researchers found fewer insects and less aquatic vegetation at the sites with drain tile and the insects they did find had higher levels of selenium in them. They did not look at neonic levels, as these are harder to measure. As well as fewer insects, Kerby says the timing of when insects emerge in the pond has shifted at the tile sites, with fewer emerging in June and July than typical.

“When you’re looking at a waterfowl production area, the ducklings feast on these emerging insects,” Kerby says. He adds they do not have a waterfowl specialist involved in the project yet to see what impact this might be having, but they do see fewer amphibians. “This may be linked with fewer insects.”

Moving forward
The researchers are currently seeking additional funding to continue the project. The goal is to collect enough data to inform policy-makers and management leaders, but Kerby also believes there is an engineering opportunity.

One opportunity presents itself in being able to identify the source and manage any issues there. Another is to treat the water properly as it leaves the system through a single pipe.

Students from the University of South Dakota collect data as part of a study to determine the impact of agricultural drainage on wetlands.

One company’s process
Gabby and Tyler Heinsohn, the owners of North American Drainage in Aberdeen, SD, believe collaboration is one of the keys to protecting the environment and improving agricultural land. That’s why they work with government agencies to ensure their systems have minimal, if any, impact on protected lands.

“It was our strong desire to be proactive ambassadors for the drainage industry in our area,” Gabby says. “We reached out to local agencies and collaborated on a process that facilitates co-operation on all fronts.”

The Heinsohns consult with USFW and Natural Resources Conservation Service (NRCS), obtaining maps detailing protected lands and water sources that they overlay with a satellite image for a more comprehensive picture of the area. They then combine that information with the topographic data they gather from their surveying process to develop a design that is conscientious of that land’s watersheds.

“Some protected areas can neither have water removed or added to them,” Gabby says. She explains they layer watershed maps from USFW and NRCS to determine how close they can go with their drainage system. “Each agency has its own formula or policy regarding buffers that are to be taken into account as well.”

Gabby says runoff is actually reduced when soil is properly drained rather than when left saturated or highly compacted.

“Properly drained soil allows for more absorption, which in turn keeps chemical applications in the desired area of the crop,” she says. “It also effectively decreases the amount of chemicals needed to be applied in order to achieve desired results. We support the theory of prescription farming, where only what’s needed need be applied. We also encourage the use of surface drainage with the use of a grass waterway.”

In a grass waterway, the grass helps prevent soil erosion and provides some filtration of surface runoff.

The Heinsohns recognize their process is not a definitive solution but they hope to further improve it through continued collaboration. And there is interest in their process. Tyler recently presented the company’s method of calculating setback distances for wetland and easement boundaries to more than 100 USFW employees from South Dakota, North Dakota, Minnesota, Nebraska and Montana.

“We received positive feedback and the interest to have other contractors start implementing similar methods,” Gabby says.