Tile drainage contractors were left with little choice but to install tile on unharvested acres after a tough potato harvest in Manitoba. 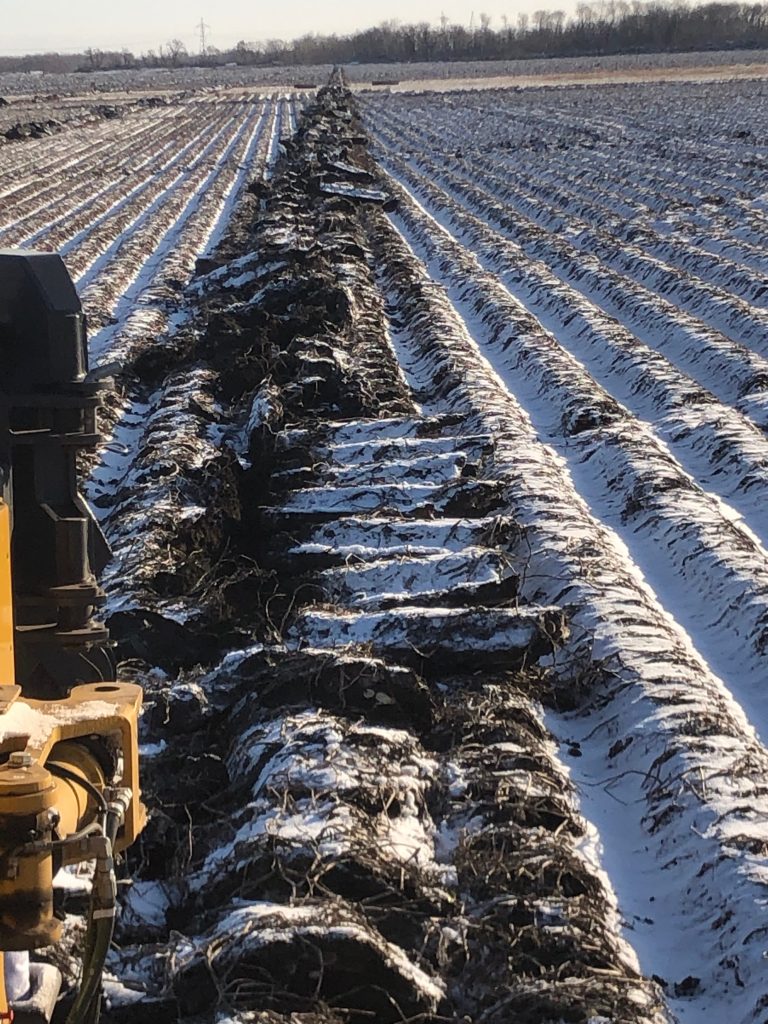 Tile drainage contractors were left with little choice but to install tile on unharvested acres after a tough potato harvest in Manitoba.

Manitoba’s potato harvest was characterized by rains that waterlogged soils at the start of harvest, a snow blizzard over the October long weekend, and an abrupt stop to any progress when the ground froze for the winter on October 26.

Darrell Friesen works with Precision Land Solutions, a company specializing in surface and tile drainage out of Winkler, Man., 30 minutes away from the North Dakota border. Friesen says his team worked on three different installations where they were putting tile into the ground under unharvested potatoes.

“What we really saw this year is that tile really helped the harvest this year,” Friesen says. “The guys that had tiled their fields got most of their potatoes off, and we had some instances where we actually went into frozen potato fields and installed tile right through the hills because the [growers] couldn’t get them off.”

“The guys that had tiled their fields got most of their potatoes off, and we had some instances where we actually went into frozen potato fields and installed tile right through the hills because the [growers] couldn’t get them off.”

Precision Land Solutions were called into fields to install tile – despite potatoes still being in the ground.

[Editor’s note: An earlier version of this story said that Precision Land Solutions were called to fill in gaps in tile on a partially tiled field. This is incorrect, the projects where tile was installed underneath potatoes had no existing tile.]

Manitoba potato producers are aware of the benefits of tile drainage.

“They know the benefits of tile by simply having their crop harvested [on tiled acres] and where they were growing [the potatoes] on untiled acres, they couldn’t get them off,” Friesen says.

However, Manitoba had an unusually wet season. Friesen clarifies that it wasn’t as simple as harvesting on tiled acres, and not harvesting on untiled acres. For all producers even getting potatoes off the tiled ground was still a challenge, but the tile drainage helped. “But we had excess moisture, it was just unbelievable this fall,” Friesen added.

“But we had excess moisture, it was just unbelievable this fall.”

For context, 13,000 acres represents 27 per cent of the year’s crop for Manitoba, according to Dan Sawatzky, manager of Keystone Potato Producers Association. Heading into the winter, the entire Canadian potato industry expressed their sympathies for Manitoba growers who were dealing with their second difficult harvest year in a row.

The potatoes are grown in hills above the ground so the machinery has to drive over frozen lumps in the ground instead of over a fallow surface. “The hills that were frozen when we go diagonally across them were definitely a challenge, because it’s a challenge to get over them with some of the equipment that we’re using. It’s really rough,” Friesen explains.

It wasn’t a large amount of unharvested acres that were tiled, but any amount is a significant amount given that potatoes are a relatively expensive crop to grow when compared to other cash crops. Even with the unharvested acres, potato growers still saw the value in an investment in tile drainage.

“What we’re really seeing is the growth in tile in Manitoba, where some of the results are starting to come in now of the value of drainage and in potato crops especially or any of the high value type crops,” Friesen explains. “The return is so much more in crops of that nature.

“The whole [drainage] industry basically started with the potato growers,” Friesen says. “That’s how this whole business got started, with the high input crops, but the price of land is driving it into the other crops.”

[Related: In 2019, Chris Unrau, also with Precision Land Solutions, shared the history of tile drainage in Manitoba, including his own introduction to tile drainage while working on a large commercial potato farm.]

“That’s how this whole business got started, with the high input crops, but the price of land is driving it into the other crops.”

“The price of land has gone to a point where if you can get more from what you have, instead of increasing your acre size, it’s the efficiency plan,” Friesen says.

The average cost of installing drainage is about $1,000 per acre, according to Precision Land Solutions’ experience. Land outside of the potato growing areas is closer to $3,000 per acre. So you’re looking at paying a third of an acre to install drainage tile. “You can invest 33 percent back into your land for the rest of your life,” Friesen says.

Related
How to tile a bin yard for drainage
Getting the most from tile drainage
Digging into drones
Driving growth: Manitoba drainage company sees success