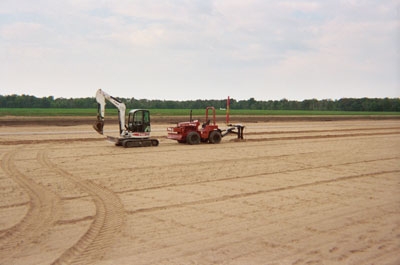 Cranberry production in Wisconsin dates back nearly 150 years, and the berry’s sense of tradition is certainly well defined on festive dining-room tables during Thanksgiving and Christmas seasons. Still, at a time when farmers are looking to maximize production and reduce any impacts on the environment, one drainage contractor is doing all that is possible for both scenarios.

For Kevin Ellingson of Ellingson Drainage, based in West Concord in neighboring Minnesota, the 2009 season provided something of a learning curve, particularly where cranberry bogs are concerned. Although the concept is not revolutionary, the process and equipment used required a greater degree of specificity and precision. “With the cranberry bogs, there’s nothing really special about the way they were constructed,” explains Ellingson. There may be nothing special to the construction but the fact that the bogs must be flooded in order to harvest the berries means there are specific issues to be understood. “Essentially, farmers used the land under there the way it was, maybe put in a small amount of drainage in the wet spots or spots that were troublesome.”

With the bog that Ellingson Drainage worked on in 2009, the farmer, owner of Horizon Cranberry, hired the engineering firm of Lampert-Lee & Associates of Wisconsin Rapids, Wisconsin, to provide the blueprint. A modification of the design called for the actual switching of layers beneath the cranberry plants, with a few in-ground enhancements. The plan for the bog had three basic goals: maintain moisture levels for the plants during the growing season; install a topsoil liner to reduce water needed for flooding and install drainage tile to remove the water once the harvest was complete. “That third goal is definitely one of the reasons for the drain tile, but it’s really more than that,” says Larry Koopman of Lampert-Lee & Associates. “It’s very important to get the water off the beds during rainfall events, and many growers in 2010 were having a tremendous amount of fruit rot in the crop, particularly on beds that don’t have adequate drainage.”

Koopman could not overemphasize the importance of this third goal; if water covers the bed during the heat of summer, it can quite literally cook the fruit and render the crop useless to the grower.

The design and the challenges
In most of the bogs in Wisconsin, cranberries are grown in sand. Traditionally, the topsoil is taken off, the beds are levelled, and in some cases, they can be cut further down in the sand to get the bed elevation closer to the local water table. “What was different on what we did was that we took that topsoil off, and then undercut the beds down to the elevation needed, so that the surface was where we wanted it to be,” details Koopman. “Then we put six inches of topsoil underneath, and most of that had to do with the fact we can’t build cranberry bogs in areas where they traditionally did, which is in wetland areas.”

Cranberries are a wetland plant and need water close by the roots, but not actually in the water, which is why drainage tiles are advantageous.

With the environmental concerns, Koopman and Ellingson combined their skills to replicate the necessary conditions for cranberries by creating artificial wetlands, complete with a layer of topsoil to trap the water in the sand above them, which helps in flooding the berries for the harvest. “But they also flood in the winter time, to put a layer of ice on top of the vines, to protect them from the winter environment,” says Koopman. “Then they actually drive on top of the ice and spread a layer of sand, and when that melts, it pins the vines down and helps them to grow.”

It can be challenging in natural sand soil, to flood up, be it for harvest or for winter flood, because the sand is very permeable. Reversing the layers means the topsoil below slows down the water and holds it in the bed. “It does such a good job of holding it in the bed, that now we can’t get rid of the water, so that’s one of the reasons for putting the drain tile in,” says Koopman.

Another benefit of the drainage tile was that it helped redistribute the water around the cranberry bed, so the water was more uniform, whether it was coming from rainfall, irrigation or from putting on a flood for harvest.

When it came to the actual ground work, Ellingson explains that the topsoil was stripped from the bog, followed by the same process to strip between 18 and 24 inches of sand. The topsoil was then laid back down to a depth of six inches to form a type of liner. Then the sand was brought back in and replaced to a depth of 14 to 18 inches. “The bogs we were working on were 160 feet wide and a quarter of a mile long,” says Ellingson, adding that there were 23 beds for Horizon Cranberry. “And we put this tile in every 10 feet on center with these bogs, so we ended up with 16 quarter-mile lines per bog.”

Koopman adds that the topsoil was crowned four inches from the center of the bed to the outside edges of the bed, just to provide some positive drainage underneath the sand layer below the drain tile. Another minor hurdle lay in convincing the crew with Ellingson Drainage to lay the tiles perfectly flat. “That flies in the face of everything they normally do, because they put them at a pitch to provide more capacity to carry water away,” says Koopman. “If they lay them flat, they don’t drain very well, but in this particular case, that’s what they absolutely needed to have happen.”

Connections and equipment
At each end of the bog, the Ellingson Drainage crew dug-in 12-inch dual wall tiles as the main. “We dug those in first, and then plowed four-inch sock tile laterals from end to end, and connected each four-inch lateral down into the 12-inch dual wall main,” details Ellingson. “So within each bog, we ended up with 16 lines, all tied into the main on each end, and in between that, they were putting in four irrigation lines.”

Now complete, Horizon Cranberry has an ideal system that makes it easier to keep the plants moist while keeping the root system dry enough to reduce the risk of any kind of rotting.

As for equipment needs, Ellingson’s crew employed a custom-designed, refitted Ditch Witch vibrating plow. “We took the vibrating plow off and we built a tiling plow,” he says. “We needed to custom-build a tile plow to fit the specific needs of this project because these lines are so close together and you can’t have a standard-sized drainage plow in there. These lines only go in 13 inches deep, so you have to stay above that soil liner that they’re putting in there; you don’t want to penetrate that.”

Related
Controlled drainage water management
Big impact, low cost
P in surface runoff
How, why and when to mole drain