The Scott Farm demonstrates the many benefits of a well-designed drainage system. 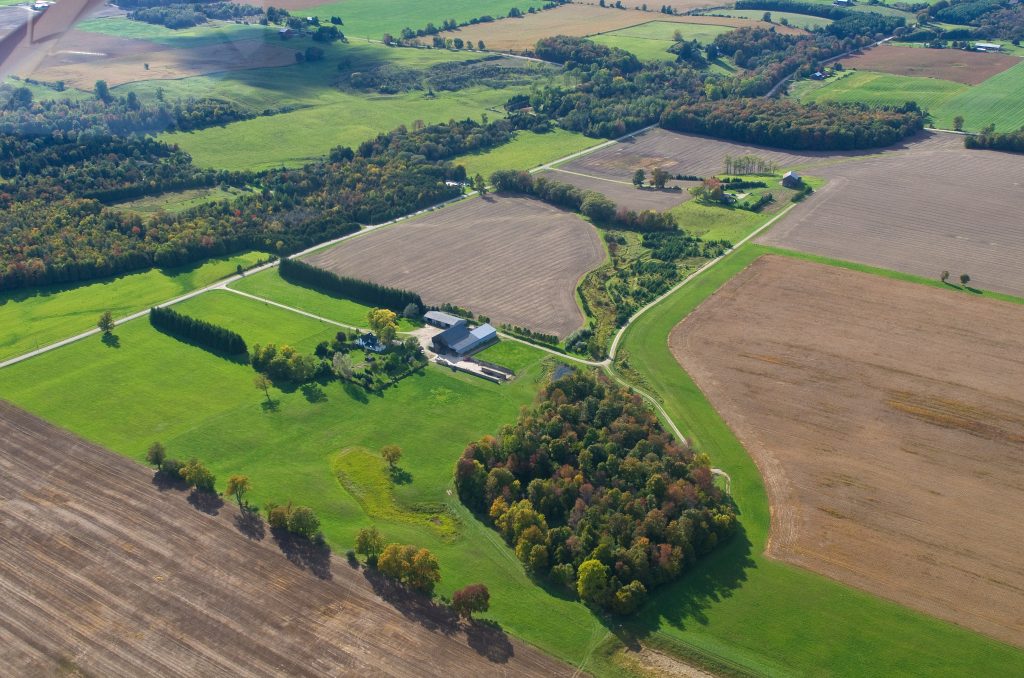 In 2005, Murray and Wilma Scott approached the Maitland Valley Conservation Authority with a common drainage issue. With hard work, they resolved the issue for good and were awarded the Ontario Minister’s Award for Environmental Excellence for their efforts.

Ten years on, the Scott farm continues to demonstrate to drainage contractors, farmers and community leaders alike the benefits of using a systems approach when it comes to drainage.

The rolling farm near Belgrave, Ont., has been in the Scott family since 1856, when it was purchased from the Crown. While the fields are heavy clay, a gravel bottom provides great natural drainage and a high water table means that the Scotts have to manage a lot of water. A municipal drain was dug in the early 1950s, outletting to the Belgrave Creek, which flows to Lake Huron via the Maitland River.

For years, runoff coming from the farmed slopes brought a steady stream of sediment into the open section of the drain. While the drain’s consistent flow meant that it didn’t require dredging, the Scotts still had their share of troubles with it flooding their fields. “It was a messy thing and it was getting wider over time,” Murray says. They also noticed the trout that had once spawned in the watercourse had disappeared.

To address these issues, the Scotts wanted to create clear and cold water on the property, says Simon VanDriel of VanDriel Excavating in Clinton, Ont. “Water comes from over there and leaves over there, we can’t change that,” he explains. The solution is to slow down the water by capturing it in wetlands and forcing it to take a much longer route to Belgrave Creek. “When water gets to the lake, it is lost. I know that sounds funny, but you actually want to get it underground and to keep up the water table,” VanDriel says.

Between 2005 and 2009, the Maitland Valley Conservation Authority (MVCA) coordinated the funding and construction of a project that would showcase a whole suite of drainage solutions on the Scott farm. Agricultural runoff is now redirected through 2,558 feet of berms, 2,030 feet of grassed waterways and four standing inlet pipes into six constructed wetlands. Flow is controlled with three control boxes and an overflow culvert, while water is filtered through two French drains and three nitrate filters. In total, 813 feet of the channelized drain was restored to a low flow meandering channel with native shrubs and trees planted in the riparian areas. An additional 4,033 feet of trees were planted as windbreaks to protect topsoil from wind erosion.

This solution was far beyond what the Scotts had originally expected. “And tours were never something we imagined when we started this,” Murray says with a laugh. In the last decade, the Scotts have taken hundreds of people around the property to show them how it all works. In looking back however, Murray feels that they started working on the wrong end of the drain. “We should’ve started upstream and worked our way down,” he says. “Any project of this nature should be done on a watershed basis.”

Geoff King, stewardship coordinator with the MVCA agrees. The organization is currently working with the four landowners upstream to intercept the runoff in a series of erosion control berms that will slow the water down even before it gets to the Scott drain. King is also exploring the possibilities of including these berms and other improvements under the protection of the Drainage Act. This will ensure that the area’s natural infrastructure is maintained for optimal function.

Murray points to the fact that his farm was once part of the extensive Queen’s Bush that was cleared and drained for agriculture over a century ago. “Water used to pool in these places and go down into the aquifer, but now we’re draining it all in a short period of time.” He believes that with a bit of common sense, we can mimic Mother Nature while still making agriculture viable.

“We still need to tile drain because we can’t be productive without it,” he adds. “But through the experience of doing all this it has become clear to me that we were doing things all wrong in just letting the water go downstream and all drain away like that.” His field tiles no longer outlet directly to the drain, but empty into a series of constructed wetlands that allow the water to filter and seep down, along with the yard and roof runoff.

When Murray systematically tiled an adjacent 80-acre field in 2009, a control box was put on the main header at the downstream end of the field, so water can be stored there underground if needed. The field drains into a 370 by 130 foot stormwater management pond.

The pond was dug over the 14-inch municipal drain, and VanDriel opened the municipal tile with a control structure that diverts water to the pond in low flow conditions and back into the drain during high flow conditions. The pond can hold 290,000 cubic feet of stormwater and extra overflow culvert outlets along a grassed waterway into the woodlot. The pond drains back into the municipal tile through the control structure and outlets just 37 feet further downstream onto a rock chute within the woodlot. A field tile from the north also outlets through a nitrate filter in this location. Here a deeper pond was dug to act as a sediment trap and as a low flow pond for fish.

Overflow from two wetlands in the southeast join the drain here. These were naturally wet depressions that were dug out to increase the area’s water storing capacity.

Perhaps the biggest project was creating a 1,920 foot-long berm and grassed waterway that curves along the north edge of the Scott drain and has also provided a new access road for machinery and tours. The grassed waterways safely convey the field runoff to two separate catchment areas, one 80 acres to the west and the other 60 acres to the east. At the base of the east berm, a 620-foot long circular French drain filters water before it outlets in a four-inch pipe under the laneway and into the Scott drain. The drain is lined with filter cloth, backfilled with sand and “A” gravel, and then covered with topsoil and grass. A six-inch overflow culvert outlets under the road at the top end of the open section of the drain.

This section had long been straightened, but King was eager to construct a low flow channel that would meander and have the ability to self-maintain. While most of these meandering channels are professionally engineered, in this case the team spent time observing the channel’s flow patterns and then put in sod clumps to make the channel narrower and accentuate its existing shape. They found shallow ground water seeping out of the bank that now added cold and clear water to the base flow, whereas before it had been oozing from the silt along the drain. The Scotts were impressed with the naturalized channel. “A week later it looked like it had always been that way,” Wilma says.

On the west side of the property, surface water is intercepted in two areas behind the long berm and drains through standing inlet pipes and into a wetland, along with the field tile from the north.

Decades ago, the Scotts built fish hatcheries along the drain, but the concrete tanks were left vacant for many years before the team thought of using them as nitrate filters. In 2008, Will Robinson with the University of Waterloo joined the team to pilot a nitrate filter design project. Two hatcheries were laid with a grid of four-inch PVC perforated pipe and filled with woodchips. Overflow from the wetland runs along a grassed waterway into the first filter, on to the second and then outlets to the Scott drain.

Water quality monitoring has shown that the filters were effective at removing 100 per cent of the nitrates from the water that went through them, though they can only filter a small fraction of the total runoff. One challenge with this system is that it needs to have a consistent flow of water through it. “If the flow is too high, then it doesn’t have enough time to take the nitrates out,” VanDriel says. “But if you don’t put enough water through it, it dries out and becomes too acidic to work.”

The team worked with Parish Geomorphic to engineer the naturalized channel near the filters, and other difficult areas of the project were professionally designed as well.

“It was a unique project, because there was no ‘blueprint’ so to speak,” VanDriel says. “It existed in Geoff’s head and we worked on our hunches. We knew the principles, we knew the landscape, and we knew what we needed to accomplish.” They have replicated these principles across a number of subsequent projects in the area, most notably in the Pine River watershed, to the north.

The Scott Farm project was made possible by funding from Greencover Canada, Huron County, the Department of Fisheries and Oceans, Ministry of Natural Resources, Parish Geomorphic, VanDriel Excavating, MVCA and, of course, the landowners themselves. The Scotts retired 10 acres of land and put much of their own time and money into the project. Their enthusiasm and dedication to the project, including running tours for the public, has earned them some well-earned recognition, including the 2013 Minister’s Award for Environmental Excellence.

Fish sampling in 2014 monitored a substantial amount of small brook trout, and water quality samples indicate that the area has been significantly improved.

The Scotts will admit that these improvements haven’t put any money in their pockets, but they are happy to be keeping their topsoil on the property. In the last decade, the drain has required no maintenance and it has withstood some of the worst weather on record in Ontario, including one of the driest years on record in 2012, followed by one of the wettest years recorded in 2013.

The proof is in the water: while nearby watercourses are running full and muddy, the base flows of the Scott drain remain constant, clear and cool.