Illinois contractor has the third generation involved in the company. 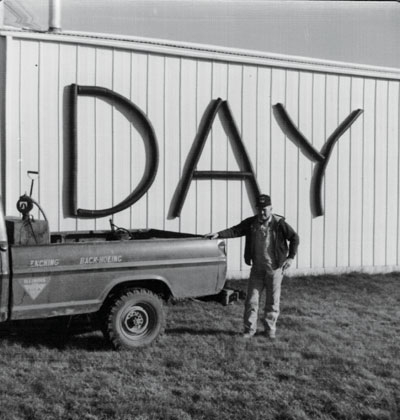 Clyde Day in the beginning days of the company. When your company’s been in business for over 50 years there are a lot of stories to tell.

When your company’s been in business for over 50 years there are a lot of stories to tell. Day Drainage owners Dan and Scott Day spoke about their company, how it began, where it is now, and why it will continue to march forward.

Day Drainage began in much the same way many successful American businesses do, through the hard work of one determined individual. Having determined his business of building houses to be financially unsuitable, Clyde Day, Dan and Scott’s father, set his sights on tiling. So in March 1961, when Scott was four and Dan was eight, Clyde founded Day Drainage with his wife, Rose. He chose Gibson City, Illinois, as the ideal location to set up shop. The company’s main office is still located there today.

To be successful, Clyde knew his business had to do something that the competition could not. He realized many of his competitors were unwilling to install pipes during summer months for fear of damaging farmer’s growing crops. Clyde developed a unique plan that paid farmers back for the crops damaged during the installation process. This allowed Day Drainage to continue work during months when many other contractors could not. Scott and Dan continue the practice to this day.

You could say Day Drainage is a good old-fashioned American success story. However the Days’ commitment to technology and innovation is anything but “old-fashioned.” When the company began over 50 years ago, they were installing clay tile. As technology improved and better-quality materials became available, the company switched to concrete and then plastic pipe. This willingness to embrace new technology has made a big difference in the durability of the drainage tile they install.

Clyde, Dan, and Scott have been involved with the Illinois Land Improvement Contractors Association (LICA) for many years. Clyde and Dan have both served as president of Illinois LICA, and Scott has served as a national LICA drainage committee chairman.

Scott and Dan are both hands-on owners. They each supervise one of the company’s two work crews. Neither brother is afraid to get in the trenches and work alongside their crew. They also develop all of the survey maps and tile plans for their customers.

Currently, the company is employing its third generation of Days, with Dan’s daughter Kristin working from the main office. Dan’s son Nick and Scott’s sons Luke and Culley also assist the company when they can.

As much as things have changed over the years, the one thing at Day Drainage that has always remained consistent is a commitment to quality. “Quality is number 1, not price, not speed, but quality,” Scott said.

Day Drainage will continue to remain strong because of the Days’ passion for quality and commitment to detail. Having just celebrated its 51st year of business in March 2012, the company is continuing its march into the next 51 years with a true focus on quality, and with the same family that fueled it from the start. The Days are far from being over.