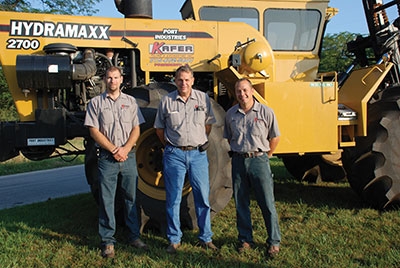 Keeping it in the family: Chris It was a few short years after the Second World War came to an end – 65 years ago to be exact – that Ben Kafer started his family on its journey in the tile drainage business.

It was a few short years after the Second World War came to an end – 65 years ago to be exact – that Ben Kafer started his family on its journey in the tile drainage business.

“It was 1948 and he was a foreman on the railroad at the time,” explains Ben’s grandson, also named Ben Kafer, who is a current co-owner of Kafer Tiling and Excavating in Fairbury, Ill. “A railroad strike happened and he needed to provide for his family of eight children, so he started digging drainage by hand.”

The elder Ben’s son Duane was 19 at this point and pitched in to help his father. Duane then joined the army, and when he finished his military career a few years later in 1953, he used his savings to purchase a Jeep trencher. “My grandfather Ben and my father Duane used it to work jobs together, using a string for grade,” notes the younger Kafer. “In 1962, Dad also purchased a Speicher wheel trencher as well as a backhoe, one of the first in the area.” Kafer himself started working full time in the family business in 1979, and in 1983, he purchased the business (which was then known as Kafer Tiling & Ditching) from his father, who continued as an active part of the company for many years. Kafer says he enjoys the drainage business because he gets to see firsthand the difference it can make in a farmer’s field. “It’s amazing what the impact can be when an existing tile quits draining and is repaired to start working again,” he explains.

In 1990, Kafer made the move to purchase a Port Industries Hydratandem II wheel trencher, and used it for many years to install mostly clay tiles from Diller Tile in Chatsworth, Ill. “In 2011, we added a Hydramaxx 2500 chain trencher for easier backfilling,” he says. “And as more customers wanted system drainage on their farmers, we purchased a Hydramaxx 3500 plow in order to be able to offer the installation of plastic tubing (made in Chatsworth by Prinsco).”

The company also installs large-diameter tiles with its excavators, all John Deere and CAT. “We choose these brands because they allow us to provide our customers with what they desire, and because they and their dealers offer dependable service and available parts,” Kafer says.

A member of the fourth generation – Kafer’s son Chris – started full-time work in the family business in 2002. “He enjoys the ditching and began a business called Kafer Excavating in 2006,” notes Kafer. “In 2009, we changed Kafer Tiling and Ditching to Kafer Tiling and Excavating Inc. to merge the two businesses and allow the sale of stock.” The move also brought in Kafer’s cousin Josh Kafer, who had worked for the company on and off since 1992, as a part owner. “We three are the current owners of the corporation and my wife Carol continues to run the office,” Kafer says. “I believe this will help in the continuance of this business for years to come.”

Kafer Tiling and Excavating now designs and installs drainage systems (main tiles shared by neighbors and random tile lines) and handles tile repair, downspouts, septic systems, waterways, ditch cleaning, pond creation, tree grinding, directional boring, terraces and demolition. Chris manages the excavating side of the business. Carol handles payroll, invoicing, payables, advertising and all other office management tasks. Kafer works in sales and purchasing of materials, and assists where needed. Josh designs drainage systems and dispatches the company’s eight employees each day. And with such a strong family involvement, Kafer says treating employees the way he and his family would like to be treated is so important. “We greatly appreciate the work our employees do and recognize that they are a very important part of our business.”

Industry progress
Looking back over the years, Kafer says the use of laser on trenching machines was probably the first large industry change that affected the family business. His father Duane added laser to replace the targets he was using at the time in 1972. “The change from laying clay tile to plastic tubing was another big step,” Kafer observes. “In recent time, I would say the biggest change in the industry is the use of GPS, not only for mapping but also machine control.”

In terms of memorable jobs, Kafer recalls one that involved a long-term tenant farmer customer. “The land he worked had been sold to an owner who had tile plowing done by a competitor,” he says. “They had plowed through a neighbor’s eight-inch main and caused him to have a pond full of water for a year. This tenant then asked us to repair about 400 feet of it because the other company would not come back evidently for such a small job and planting was already started.” Kafer says the landowner was so pleased with their work that he later had Kafer system tile more than 700 acres for him in three locations. “I believe it pays to offer a full-service business of both new installation and repair of old,” Ben says. “If a customer has a wet spot, no matter what size the job, it is important to us to satisfy him.”

Another memorable job involved the opportunity to install a 30-inch tile for a 2,000-acre watershed. “The neighbors had worked together to replace a failing 21-inch clay main,” Kafer remembers. “It was a joy to see everyone co-operating financially and otherwise, with most of the people involved not getting a tile on their farm but understanding that their tiles connected to this main. Most of the owners involved were our customers and trusted us to design and install this main.” He adds, “Our customers told us this project was very helpful in draining the excess water from the spring rains of 2013.”

When asked about the secrets to success and longevity for a business such as theirs, Kafer recognizes the value of learning from the past.

“I believe everyone can and does make mistakes. It’s the way you handle them that makes the difference,” he says. “To stay in business for years and have repeat business, we must provide our customers with a quality product at a competitive rate. We try to treat people the way we would want to be treated.”