Features Contractor at Work
End of an era

Wideman’s Farm Drainage performs what could be the last clay tile installation in North America. 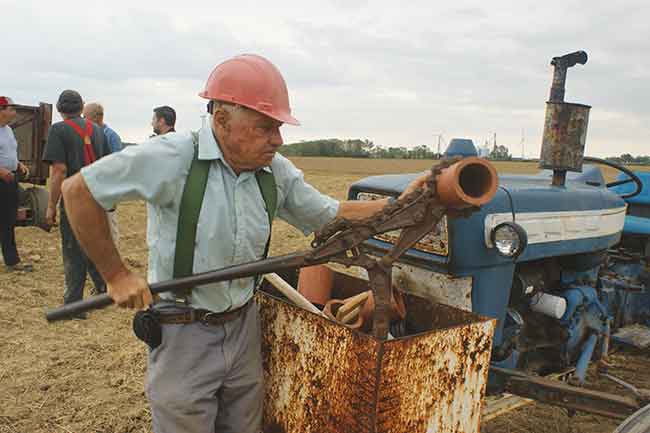 Under overcast September skies, David Wideman of Wideman’s Farm Drainage marked the end of an era, laying what he believes to be the last clay drainage tile to be installed in Canada.

Near as Paisley Brick & Tile Co. Ltd.’s J. Doug Seiler can figure, his company manufactured the four-inch tile about six years ago. At the time, Paisley Brick & Tile was the last producer of clay tile in the province; plastic had already risen to dominance in the agricultural drainage market. Seiler says the tile would have been made from shale clay, dug from deep in the earth and trucked from Georgetown, ON to the manufacturing plant in Paisley, ON From there, the tile was purchased by Terence Laird to drain his farm in Thedford, ON.

But after Laird passed away in 2011, 32 pallets of tile were set aside as estate assets. In the intervening years, while Laird’s estate was settled, the tile sat out exposed to the elements. Then, earlier this year, with the summer’s harvest out of the ground and fall planting set to soon get underway, that tile finally found its way into the soil.

In mid-September, Wideman returned to the same field where he’d last installed clay tile in order to finish the job: installing the remaining tile about 2.5 feet down; mains were laid an extra few inches lower.

“The laws that govern us guys, they want two feet of cover on the tile at all times so that way, to accommodate for four-inch tile, you go two-and-a-half feet deep,” Wideman explains. “With any mains, we set our minimum to at least three feet, if you can, so that it’s out of the way and you can slip over it.”

Although the installation was a little different because of dealing with clay rather than plastic tile, Wideman adjusted easily. “You need more help with clay, but clay’s fast,” he says. “We usually worked with three to four men and they did everything. You run the machine, you have somebody put tile in and then somebody would bring tile or load tile and he could backfill and do the blinding too.”

David Wideman of Wideman’s Farm Drainage cuts the clay tile to be installed on the Laird farm.

There was no shortage of helping hands on the day Drainage Contractor visited the work site. Laird’s son, Robert, who now owns the farm, was very hands-on, loading the tile while Wideman drove.

“Dave is the guy to do the job,” Robert says. “He put in the last tile and he’s got the machine for it. He knows where the tile is in the field better than I do, that’s for sure.”

Robert’s brother and grandson were also on hand to pitch in on the installation. And so was Seiler, who was impressed by how well his product has stood up after so long above ground and exposed to the elements.

“In the last 25 to 30 years, we had better facilities to fire the tile, and tighter tolerance on quality control. It’s as simple as that,” Seiler says.

On the day Drainage Contractor visited the job site, the tile was performing at a 94 percent install rate (that is, 94 percent of the available tile was usable).

Although Wideman and Seiler agree that there’s almost certainly the odd pallet of clay tile stashed here and there, and perhaps some scattered tile stacked in the back corner of someone’s shed, they believe Laird’s farm will be the last in North America to be tiled largely with clay.

“Unless there’s a pallet in Ohio someplace, or some piled in a fence row, this is it,” Wideman says. “And that tile – it depends who made it, whether it survived the weather as well as this tile. That’s just a fact of life.”