Many experts agree that controlled drainage has many benefits. But how do you know if it's right for your farm? 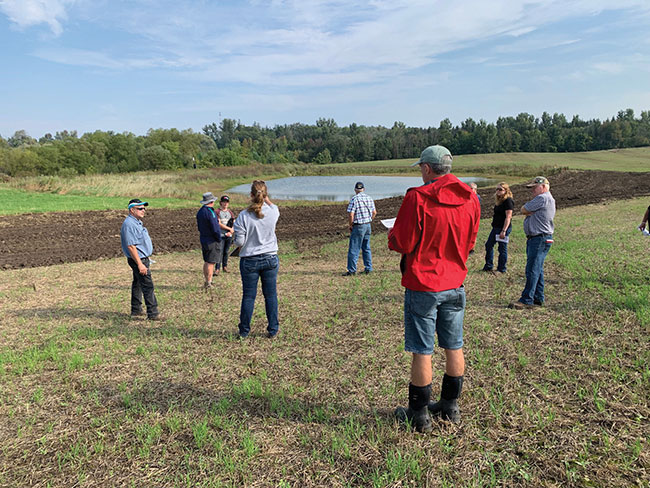 :The Huronview Demo Farm is the site of a project studying controlled drainage on three-to-nine percent slopes. Images by Drainage Contractor

With mounting pressure to increase crop yields and protect the environment and following best management practices, controlled drainage may provide the best of both worlds.

Laura Christiansen, associate professor and faculty extension specialist at University of Illinois’ crop sciences department, once described controlled drainage as “one of the few water quality drainage practices that we promote that has the potential to provide a yield benefit.”

The idea behind controlled drainage is similar to controlled irrigation systems. By regulating the water table level, this keeps the water table at a depth most favorable for crop growth throughout the season. This helps mitigate water issues many growers face – having too much water at certain times of year, and not enough at other times.

“Drainage is a best management practice until it’s not. That’s why we want to have a tap, essentially, to turn it on and off,” says Mel Luymes, executive director of Land Improvement Contractors of Ontario (LICO).

Controlled drainage provides a way to store water in the ground for crop use in dry periods, while still allowing for excess water to be removed through subsurface drainage. It’s achieved when a flow-restricting device is placed inline with tile drainage pipes. These control structures are strategically placed and regulated by controlling the level of water at the outlet – either full, partial or no drainage.

The open-ditch structure is used either in ditches for small area control or at a drainage outlet. Inline control structures are attached to subsurface drainage pipes, and can either control the flow from individual pipes or on a subsurface outlet drain.

The stop log is usually a composite or aluminum board set at about 50 to 60 centimeters below the surface inside the control structure. These are also called flashboard risers, plates, mini-check dams or control gates.

Since the 1980s, controlled drainage has been applied to reduce nutrient losses in North America. Yet as of 2022, the practice hasn’t been widely adopted. The first iteration of the technology was considered cumbersome, and the wood used to dam the drainage water tended to swell, making the boards difficult to move.

However, new technology has refined the system, making controlled drainage a viable option for many landowners and crop producers who farm on fields with slopes less than 0.5 percent. Smart technology offers further enhancements, such as notifications to raise or lower the boards based on weather forecasts and automated systems.

“Slopes are the challenge. In Ontario, only two percent of land is flat enough to do regular controlled drainage. Unless we can figure out how to do it on a slope, it’s not going to be something we can really look at in Ontario at least,” says Luymes. Before she was at LICO, Luymes coordinated the Huronview Demo Farm in Clinton, ON, which is studying controlled drainage on three to nine percent slopes.

In addition to being limited to the flattest fields, controlled drainage works better on new drainage systems rather than existing tile. Plastic tile drains can be retrofitted, but clay tile will not work.

In a recent webinar for Drainage Contractor titled, “Controlled drainage and sub-irrigation: Drainage…for the control freak,” Gerald Neeb, owner of Roth Drainage Limited, said when he installs controlled drainage into a field with existing clay tiles, he tries to plow them out since the old systems don’t function well when under stress, and they’re usually drained by either the width or length of the farm.

“I’m trying to get 80 percent, and then going diagonal will finish it off. We’re having good success with that,” he said. 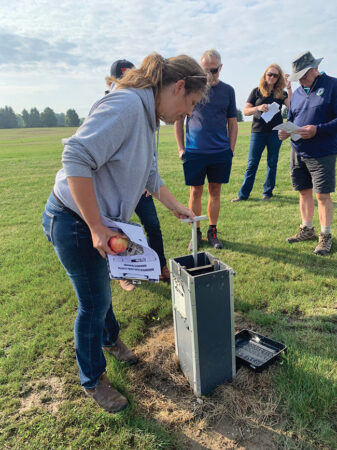 Purdue Agriculture estimates initial costs to range between $20 and $110 per acre. Luymes says, from her experience, installing controlled drainage costs about 15 percent more than a conventional system would.

“You need to make it curvy and then whatever you choose to be your control gate can blow your costs out of the water,” she says.

Also in the Drainage Contractor webinar, which was moderated by Luymes, Will and Rick Woodworth of Flying W Farms in West Virginia shared their experiences. The first field in which they attempted controlled drainage was previously a poorly-drained field, which produced typically between 160 to 180 bushels of corn. After adding controlled drainage, they had an increase of 90 to 110 bushels, with an average of 270, and decreased water runoff.

Despite positive indications on the yield increases from controlled drainage, yield research is still limited or inconclusive and most studies focus on nitrate reduction benefits. While exact figues are not yet widely agreed upon, general sentiment shows that controlled drainage has a positive effect in this area. In an article for the Environmental Defense Fund, Maggie Monast, senior director of climate-smart agriculture, finance and markets, reported that “controlled drainage is one of the most effective ways to minimize nitrogen loss from croplands.”

Christiansen says controlled drainage can reduce nitrate loss by at least 30 percent each year. This is because holding the water back in drains or ditches allows the nutrients to stay in the soil. The exact amount of annual nitrate load reduction in drain flow varies based on location, climate, soil type, cropping practice and the time of year drainage takes place.

NC State Extension has also said losses of N and P in drainage water can be substantially reduced by controlling drainage outlets during both the growing season and the winter months. According to a primer article by the Extension department, “Multi-year experiments on a wide range of soils on both farmer-operated systems and on experiment stations in North Carolina showed that CD reduced N losses to surface waters by over 40 percent and P losses by about 25 percent compared to conventional uncontrolled.”

Controlled drainage can both improve yields and profitability while also benefitting the environment by reducing nutrient runoff. And while it may not be available for every field at present, research is moving forward to determine how to best add this BMP to fields with elevation or existing tile drain systems. DC