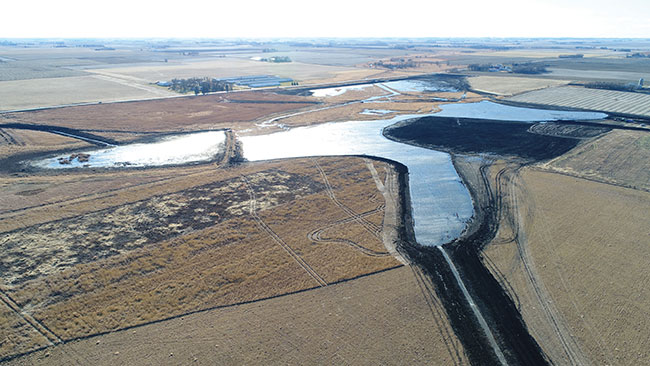 A restored wetland is an edge-of-field practice with great potential for nitrate-N reduction and water quality benefits. Photo courtesy of the Iowa Department of Agriculture and Land Stewardship.

For many, 2022 represented a return to normalcy. Granted, work in the drainage industry had largely continued uninterrupted in the face of COVID-19, but with restrictions on gatherings partially or entirely lifted last calendar year, 2022 marked a return to in-person conferences, workshops and trade shows.

Beyond that, trends emerged and strengthened in drainage that helped to elevate the practice and increase its profile on the world stage. Increased interest in conservation drainage and water management proved that contractors have a vested interest in water quality. New research showed how to make drainage more effective and environmentally friendly while increasing yields. Municipalities and states invested in drainage, proving that drainage has use beyond the Midwest.

Here are some of the big stories from Drainage Contractor:

Since becoming a regular columnist for Drainage Contractor in 2021, ADMC executive director Keegan Kult has written extensively about the rise in conservation drainage practices, particularly from the perspective of contractors. The ADMC has regularly hosted workshops and courses on water management and conservation drainage practices. In his spring column, Kult shared data gathered from the Conservation Drainage Network Growth Committee’s winter survey on conservation drainage practices. The survey found that three quarters of respondents were familiar with drainage water management practices, and half reported a high demand for such practices. However, cost remains an issue: contractors said the highest barriers for clients were cumbersome state and federal programs, cost and the (the biggest barrier) ROI, with 81 percent and 82 percent respectively reporting this as either an extreme or moderate barrier to adoption.

We’ve also discussed new perspectives on drainage and water management from an environmental standpoint, including a new robust dataset that helps fuel BMPs around drainage, such as controlled drainage, edge-of-field practices, drainage water recycling and more.

Last year marked the completion of our first GroundBreakers program, with more GroundBreakers to come in 2023. Our first class of GroundBreakers included engineer and consultant Bruce Shewfelt, infrastructure and surface drainage specialist Adam Fisher, contracting partners Brett Sheffield and Matt Mroz and system designer Jeremy Meiners. These GroundBreakers were selected based on their work history and respect in the drainage industry and community, as well as for their innovative ideas and pushing drainage forward.

But in order to go forward, one must also remember where they are coming from. We’ve also used our platform to highlight contractors and icons in the drainage world who spent much of the 20th century making waves. Last year, Iowa Drainage owner Jim Blood celebrated 50 years in business, and reflected on the industry’s changes. LICO executive director Mel Luymes also spoke for the entire industry when paying homage to the recently passed John Wolfe, whose career in innovation and manufacturing – and his willingness to go out of his way to lend a hand – made him known far and wide in the North American drainage world.

In Ontario, drainage is mainly known as a staple of the southern regions – regions surrounding Lakes Huron and Erie have been the key drivers of agriculture in the province for generations, and their proximity to Great Lakes means they are key markets for drainage. However, in recent years, the Governments of Ontario and Canada have invested more in northern regions of the province, including in agriculture and infrastructure projects. Amount the areas growing for drainage are the Sault Ste. Marie/Algoma region, northeast toward areas such as Kapuskasing and Cochraine, and border towns like Rainy River. Rainy River, which lives up to its name, has seen a massive increase in grain farming over the last decade, and thus, more drainage operations are setting up shop. The landscape presents unique physical challenges, and the relative newness of grain farming has prompted social challenges, but opportunities remain abound.

The governments have also invested more in broadband internet upgrades in southwestern regions where farming activity is high, in an effort to help farming businesses run more effectively.