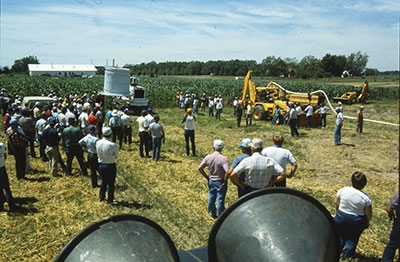 The Michigan chapter of LICA organized this demonstration of tile installation at the Michigan Ag Expo in 1985. The annual demonstration continues as they do periodically in other mid-western U.S. states. The drainage industry experienced a vibrant period of expansion and a boom of new technology during the 1970s and 1980s.

The drainage industry experienced a vibrant period of expansion and a boom of new technology during the 1970s
and 1980s.

This was a time for education and promotion of the industry. During these years, demonstrations and events, such as knowledge transfer workshops and ctonventions run by associations, were numerous and well-attended, drawing in crowds from all over North America to network and engage in the drainage community.

In the United States, the Land Improvement Contractors of America (LICA) held its annual national convention, and state chapters also held annual winter and summer meetings as they still do. The former “Buckeye Days” in Ontario were replaced by the annual winter meeting of the Ontario Farm Drainage Association, which later became the Land Improvement Contractors of Ontario (LICO). Besides hosting vibrant social activities, the association was known for its technology transfer with practical sessions, which helped spread the word on new ideas and techniques in the field.

Every six years, the American Society of Agricultural Engineers held the Drainage Symposium, usually in those days in Chicago. This was where drainage researchers spoke of their latest findings and advances in research techniques. Of particular note was Dr. Wayne Skaggs’ development of a computerized system of predicting drain performance using the Drainmod calculation model. This, in a more updated version, is still used to simplify drainage performance research and design. Meanwhile, the plastic pipe industry held its own annual convention, as the Corrugated Plastic Tubing Association, which eventually became the Corrugated Plastic Pipe association and then part of the Plastic Pipe Institute. The organization was the sponsor of many research projects on plastic pipe structural integrity in manufacturing and in installation.

Also during the 1970s and 1980s, suppliers provided learning opportunities for contractors. Drainage Contractor magazine helped Daymond present workshops in Ontario and Alberta. In 1978 and 1979, Drainage Contractor invited contractors to a two-day workshop in Indianapolis. This was a highly successful, though intense, session. The workshop featured speakers like Ed Walsh from Ohio, who provided some insight into good business practices, and Gordon Spoor from Silsoe College in the United Kingdom, who presented lectures to help contractors in their understanding of the soil. Spoor also introduced concepts to help contractors avoid trench smear when using plows, another top-of-mind subject of the time. These workshops were attended by 400 contractors from the United States and Canada.

In the United Kindom, a publication titled Farmers’ Weekly staged demonstrations of drainage installation annually for a period of about 10 years when drainage was booming on the back of a 50 percent grant offered by the British Ministry of Agriculture, Fisheries and Food. Drainage Contractor magazine led groups of contractors, sponsored by The Big ‘O’ Drain Tile Company, in 1974 and 1975.

Events – past and future – certainly help the industry grow and thrive, and drive innovation on and off the field.