Rain is good for growers. Too much can be a curse. How can contractors accommodate? 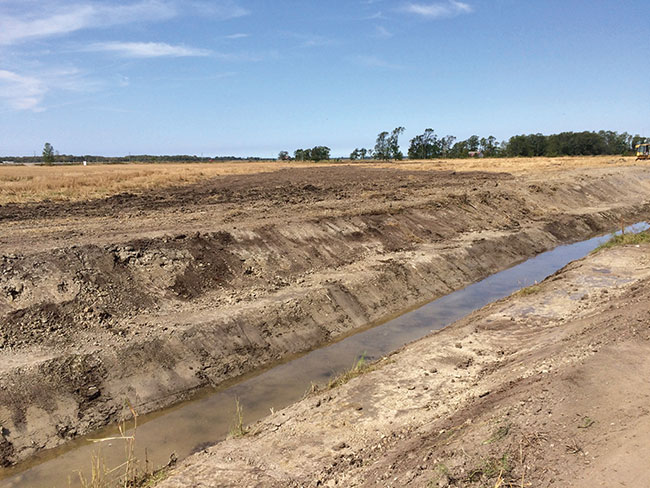 The changing global climate is playing havoc with agricultural field drainage. Many armers don’t know whether they will be faced with torrential downpours or drought, or an alternating mix of the two that defies previous years’ weather records.

“Ontario growers are facing issues with both excessive rainfall and drought,” says Peter Johnson, environmental advocate with the Land Improvement Contractors of Ontario (LICO). “Chatham-Kent has had far too much water all year, drowning crops and greatly reducing yield. Eastern and Central Ontario have been extremely dry until July, significant and heavy July rain, and returned to drought in August.”

Fighting back against the deluge
To mitigate the effects of heavy rainfalls, farmers in Canada and the U.S. are turning to enhancements to subsurface field drainage. Their goal is to manage the sudden influx of occasional soil-eroding deluges, without affecting the water and nutrient retention qualities of their fields.

“If a drainage system has been designed and installed properly, it should perform well and lower the water table from the soil surface to 30-cm depth in less than 48 hours before crop gets damaged,” says Ghane.

“Growers are doing their best to manage these extremes with tile drainage,” Johnson adds. But besides building new subsurface tiled systems, these farmers are tweaking the systems already in place by reducing spacing (distance between tiles), increasing drainage coefficient when designing and considering contour drainage and control structures.

Choosing the right depth
Making the right drainage decisions is a challenge for any farmer, because there is no one-size-fits-all solution for dealing with intermittent extreme water flows.

For instance, when it comes to the question, “what is the ideal depth for subsurface drain tile installation?” the answer “is entirely dependent upon the soil type and water tables,” says Haley Zynda, agriculture and natural resources educator in Wayne County, Ohio. “Soil with a greater concentration of clay will have a lesser depth than sandier soils.” (In Ontario, Johnson says “we believe aiming for 30 inches of cover is the optimum depth for our environment”).

Ghane agrees with Zynda’s assessment. “Generally, drain depth differs based on the soil,” he says. “When a shallow, permeable upper soil layer (less than three-foot depth) sits on top of an impermeable restrictive layer (such as a clay pan), one should install 2.5- to three-foot depth shallow drains while maintaining a minimum two-foot pipe cover. On the other hand, when the permeable upper soil layer is very deep (greater than three-foot depth), deep drains can be installed at three- to five-foot depth for reducing the initial cost of the drainage system by achieving wider drain spacings. In that case, 2.5- to three-foot shallow drains can also be installed.”

Function matters
Just as subsurface drainage depth is affected by soil type, so too is the primary function envisioned for the drain. “If quicker lowering of the water table after heavy rainfall is the goal, use shallow drains with depths of 71 centimetres to 91 centimetres,” says Ghane. 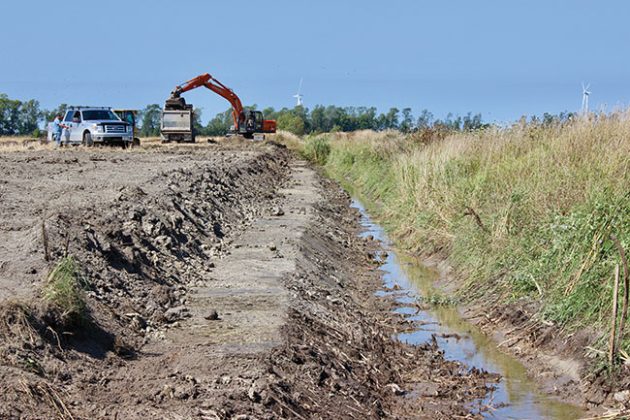 So what should they expect? “If a drainage system is designed and installed properly, it should perform well and lower the water table from the soil surface to [one foot] in less than 48 hours before the crop gets damaged,” says Ghane. “Typically, the amount of water that the system is designed to remove can vary from 0.2 to one inch per day, depending on site-specific conditions.” So some truly torrential downpours may overwhelm even the best-designed drainage system from time to time.”

Return on investment
For landowners who are considering investing in subsurface drainage, two money questions have to be answered before proceeding with such projects. First, how quickly will they see a return on that investment? Second, what will that return look like?

“Most drainage systems will pay for themselves within 10 years,” says Johnson. “Besides, there is an old saying: ‘You pay for drainage whether you have it or not.’ That means that without drainage, you will have lower yields and more field challenges at planting and harvest, so you might as well drain the land.”

“Subsurface drainage has clear economic advantages,” says Ghane, endorsing Johnson’s answer to the second question. “It pays really well due to increased crop yield, compared to an undrained field. When it comes to adding subsurface field drainage, the benefit-cost ratio ranges from 5:1 to 38:1, with an average of 15:1.

“This means that for every $1 invested in the drainage system, the farmer would gain $15 on average, which shows that subsurface drainage pays really well,” explains Ghane. He is more optimistic than Johnson when it comes to the timeline  for return on investment. “The payback period ranges from 0.4 to three years, depending on the economics, drainage design and soil conditions,” he says.

Zynda is more cautious in her ROI assessment. “This is entirely dependent on how much drainage tile is installed and what the purpose is,” she noted. “Commodity or product price will determine how quickly the investment can be paid for, i.e., soybeans vs pasture or hay fields.”

The same goes for Ontario. “When water volume gets too large, open ditches are the only option,” says Johnson.

In areas where surface drainage is employed, two-stage ditches can help deal with extreme water flows. A two-stage ditch has a bottom channel for regular flows, bracketed by ‘grass steps’ that extend back to stepped-back upper ditch walls to create a much larger channel for heavy water events.

Thanks to the extra space provided by this design, two-stage ditches can “reduce flooding by reducing the peak flow,” says Ghane. At the same time, “they reduce nutrient and sediment loss to downstream water bodies” by slowing the speed of the draining water.

“A two-stage ditch will slow water flow through the ditch,” adds Zynda. “The vegetation on the multiple steps helps to capture nutrients that would typically be washed away.”

A demand for more drainage
Clearly, there are a number of drainage options open to farmers. Which ones they choose will depend on the amount of rainfall they want to remove from their fields and how much they are willing to pay for it.

In these days of climate change, demand for these drainage solutions is strong and steady. “Undrained fields suffer more with heavy rainfall, so more producers want to install subsurface drainage,” says Ghane.

Advice to contractors
Clearly, the farming industry’s demand for enhanced field drainage is good news for constructors. The challenge is to profit from this demand while fulfilling customer needs in a time of pandemic-constricted supply chains.

For contractors to meet this challenge, “It is important to properly design and install the system for best performance,” says Ghane. “Consider designing laterals on the contours for future implementation of controlled drainage.”

As for coping with COVID-induced supply issues? “Having an excellent relationship with the tile manufacturer is a key component of being able to secure a consistent supply of drainage pipe,” says Johnson. DC

Related
COVID-19 and drainage
The value of tile maps
For farmers, by farmers
Check it out: Identifying potential suitability for subirrigation in the Midwest