Features Contractor at Work
Narrower spacing: How tight is too tight for tile drainage spacing?

A southwestern Ontario research project is investigating whether narrower tile spacing, up to 10-foot spaced, is better for its clay-based soils. 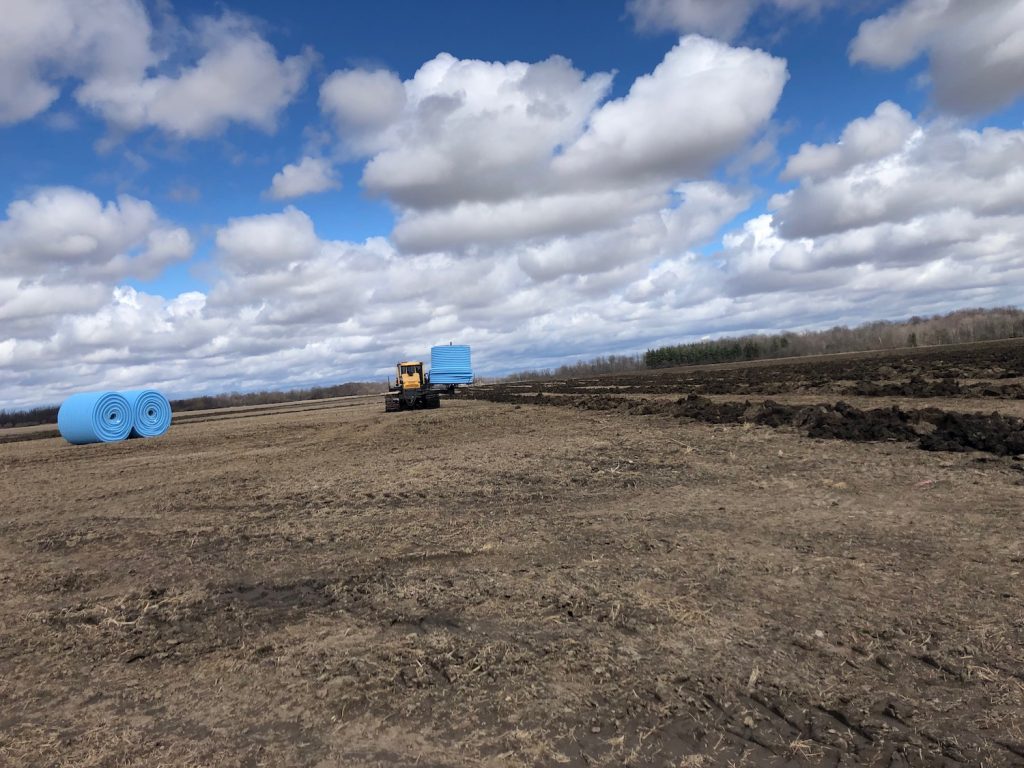 Tony Kime presented an offer to the farmer group: if anyone wanted to run a close-spacing trial, Bluewater Pipe would donate the tile. In quick succession, three farmers stepped forward to participate. Photos courtesy of Eric Dietrich.

Southern Ontario’s clay-based soils are some of Canada’s most productive – and expensive – farming acres. The vast majority of these acres are tile drained: a necessity in the heavy, compacted, slow-to-drain soil. But, are the acres tile drained at a spacing that allows maximum crop productivity?

For decades, farmers in southwestern Ontario have depended on tile drainage, at first draining depressions and valleys, then in the 1950s and ‘60s using patterned four-rod spacing. By the early 1970s, 3-rod spacings became common thanks to the advent of plastic corrugated drainage pipe and the development of the drainage plow. In the 1990s, GPS and yield monitors allowed farmers to see yield improvements over the tiles, which began a push towards closer and closer spacing. Today, it is common to install 15-foot spaced drainage in fields with heavy clay soil. What’s still not fully understood, however, is the economic return of close spacing. That question is what several of Middlesex County’s farmers, together with pipe manufacturer Tony Kime of Bluewater Pipe, are keen to answer.

“What is too close? Who knows, but over the next five years we will get some data,” says Kime, who plans to donate about 120,000 feet of pipe to 10 test sites installed between 2019 and 2021. “I’m excited to be participating in this project with young and entrepreneurial farmers who are wanting to push the limits on their production.”

The rationale for tighter tile drainage is counter-intuitive at first glance: installing more tile can translate to more drought-resistant crops. How? Desaturating the soil early in the season allows soil to warm quicker, increases air in the soil, and improves microbial activity. All of these factors allow plants to root more deeply, ultimately giving the roots more ability to withstand later season drought.

“In southwestern Ontario’s clay soil, which has low hydraulic conductivity, roots may not thrive in between tiles,” Kime says. “Farmers see it: the highest yield is within four to five feet of the tiles.”

“Farmers see it: the highest yield is within four to five feet of the tiles.”

Drainage tile can also help later in the season. Big rain events in the summer often occur on the hottest and most, to a certain point, ideal growing days. Tighter-spaced tiles can get excess water out more quickly during high-rainfall events, allowing plants to get growing again more quickly.

“If you agree with the assumption that waterlogged soil stunts growth for a short amount of time, then de-waterlogging the main root area as fast as possible means you’re giving plants hours more [in] growing time. When you’re looking at pushing management practices to the limit, hours of growing time matter,” Kime says.

The idea for trialing tightly spaced drainage came to Kime as he participated in Middlesex County’s soil crop meetings. The meetings bring together progressive farmers to share soil quality, soil health, nutrient management and water quality improvement recommendations. To Kime, however, the discussions seemed to miss an obvious opportunity.

“Over the last couple years, I have been watching these guys doing lots of development on practices above ground – strip tillage, pushing fertilizer applications to the limit, doing everything they can to see what yield impacts they can achieve – but in all these test plots, they were never reporting on what was below ground.

“Over the last couple years, I have been watching these guys doing lots of development on practices above ground – strip tillage, pushing fertilizer applications to the limit, doing everything they can to see what yield impacts they can achieve – but in all these test plots, they were never reporting on what was below ground.

“Every one of these farmers believes in drainage already. There’s no one who goes to a soil crop meeting who isn’t already intensively draining, and who doesn’t understand that drainage is the best payback they can make on their land. These guys are all researchers and businessmen: they want the best farming practices you can do.”

So, Kime presented an offer to the whole group: if anyone wanted to run a close-spacing trial, Bluewater Pipe would donate the tile. In quick succession, three farmers, all of whom are related, stepped forward to participate in the trial.

Third-generation grain farmer, Eric Dietrich, was first to contact Kime and first to commit a field.

“We farm in a highly productive area. In our part of the world, land is usually very valuable. Because we usually have excessive rain rather than not enough, tile drainage is a huge part of what allows us to do more with our farmland,” Dietrich says. “I’m all about return on investment and sustainability going forward for the next generation. If there are ways we can improve farmland and get better ROI – and I think tight tile spacing could be one of those things – we might as well test that.”

Two other farm families also jumped on the opportunity in the fall of 2019. “These are young, highly educated farmers who work really hard and are open to pushing to the limits,” Kime says.

“What we’re getting is test plots that can be compared to the rest of the field,” Kime says. “All of those farmers are using the latest mapping technologies and are managing the fields very tightly, so they’ll very quickly see if there’s benefits to the tighter spaced tile.”

Like everything else in farming, tightly-spaced tile drainage is not a silver bullet solution to all problems, nor can it be analyzed entirely on its own. Instead, spacing maps can serve as additional information farmers use to try to improve field management.

“They have soil type maps and nutrient maps and yield maps and so many other layers: a drainage map will be one more layer,” Kime says. “Ultimately, these will be pretty sophisticated data sets that may take a bit to interpret. But, we’re dealing with farmers who believe in and are skilled at using data to manage their farms.”

“They have soil type maps and nutrient maps and yield maps and so many other layers: a drainage map will be one more layer,” Kime says.

Margaret May, the regional program lead for southwestern Ontario with the Ontario Soil and Crop Improvement Association (OSCIA), sees potential in the tightly-spaced tile concept.

“We’ve been running some compaction days to show the effects of heavy equipment and tire configuration on the soil. We’ve had many conversations with farmers about why their tile spacing is not working at 30’ or 50’. It’s probably because we’ve compacted the soil down deep over many years. We think the only way to remediate that is to split the tiles.”

One year in, Dietrich is pleased with yield results from his field where tightly-spaced drainage was installed last spring. He cautions that the results available to date are based only on a single field in a single year. And, he adds, any analysis of results needs to be done while keeping in mind that installation happened in wet, early spring, less than ideal conditions, and last year’s very late planting date in southwestern Ontario translated to poorer overall yield.

“We saw about $25-$30/acre better return on that field, or about a three percent return on investment in one year. That’s fairly minimal but I think there’s potential for better in future years. And, it all depends on how a person looks at it. Tight drainage tile doubles your cost but it’s a 20 plus year investment. You can’t expect all your money back in one year. Forward thinking guys look very long-term. I don’t need it to pay me back immediately for me to think that it’s worth doing.”

“We saw about $25-$30/acre better return on that field, or about a three percent return on investment in one year. That’s fairly minimal but I think there’s potential for better in future years. And, it all depends on how a person looks at it. Tight drainage tile doubles your cost but it’s a 20 plus year investment.”

“Now we have a stage to test from. There are so many unknowns: obviously yield differences are big, but what about fertilizer efficiencies, soil temperatures – there are so many options going forward for research. We’ll get research off this area for the next 40 years.”

Ultimately, producer uptake of tighter tile-spacing will depend on economics.

“Do I think everyone will go to 10-foot tile. No. No way,” May with OSCIA says. “But if you had a highly productive farm where water was an issue, maybe you’d consider 10-foot tile on parts of it. I don’t think it’ll be routine thing by any means but it may show some promise in certain locations. There is pretty high interest among farmers in seeing how the results turn out.”