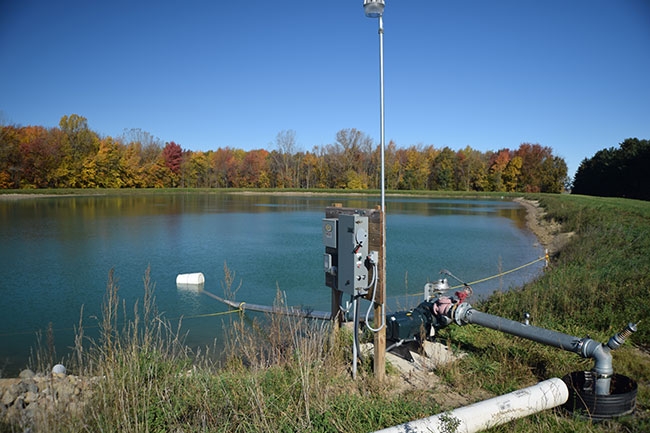 Drainage water recycling systems involve the diversion of excess surface and tile drainage water into on­farm ponds. As seen at this location in Michigan Management of excess water on agricultural lands

Management of excess water on agricultural lands, to reduce or prevent detrimental impacts, may be the most serious production problem facing agriculture in the cool, humid region of the United States.

The farm practices that offer the best solutions for the problem of excess water are not universally agreed upon and the merits of some over others is not easily isolated.

In a project that has been running from October of 2015 to this past April, preliminary findings suggest there truly are some agricultural and tile drainage best management practices that can sustain production without impacting downstream water resources.

On some of the early established sites, he has been able to acquire baseline data in the last two or three years and, as of last fall, has started testing on seven or eight of these paired sites to quantify the impact of farm practices on water quality. Looking at the data he has just started collecting, King is particularly concerned about the subsurface nutrient levels.

“What we have seen is, at least in this landscape and in Ohio here, we cannot ignore tile drainages as significant pathways for nutrient improvement,” he says. “Tile drainage generally accounts for anywhere from 40 to upwards of 90 percent of the phosphorus movement and the water movement from a field.”

Most of the soils in Ohio are poorly drained and couldn’t be farmed without tile, so there is a lot of tile drainage in the state. Further adding to the problem, soil types in Ohio tend to be prone to developing preferential flow paths. King also confirms that climate variability is increasing.

King has learned that although many farmers are quite conscious of nutrient loss and have nutrient management plans, water management plans don’t really exist. Typically, the goal is simply to get the water off the field as fast as possible and King understands that is a prudent objective for planting and harvest activities. But beyond those two times in a year, extensive drainage isn’t quite as necessary and could actually be very beneficial to growing crops.

“Not every tile system is designed for it … but, when we do have drainage water management and when we can design it, we see about a 40 to 45 percent [nutrient loss] reduction annually. So that’s some success, and a way we can store more water on the field.”

Drainage water recycling systems involve the diversion of excess surface and tile drainage water into on­farm ponds. As seen at this location in Michigan

“In a normal year a reduction of 50 percent phosphorus is achievable,” he says, “and we’re hoping for even better control with steel slag.”

Replacing the limestone normally used in the construction of a blind inlet with steel slag is a relatively new concept Williams explains. While more research is necessary, the slag should prove effective in forming complexes that bind with phosphorus because of the high concentrations of calcium and iron that are contained in it. But he admits that it’s still too early to know just how much of an impact this has to offer. “Historically, we thought phosphorus wasn’t moving through the tile drains but in recent years we’ve learned that’s not true,” he says. “We need more research on tile drainage.”

Williams believes designing and installing tile drainage with nothing more than the idea of removing water as fast as possible will quickly become an outdated practice. “There’s not only the environmental impact of nutrient loading to consider,” he says, “there’s also a lot of change in how we can best use that drainage water whether that’s subsurface irrigation or other purposes.”

One of the researchers leading the way on drainage water management is Dr. Jane Frankenberger, a professor at Purdue University. In conjunction with 14 other researchers, she’s helping to evaluate the full impact of three major practices. She says they are looking at the use of saturated buffers, although more for their potential ability in reducing nitrogen losses than their impact on phosphorus. They are also closely investigating how controlled drainage will help nutrient losses and how the latest practice of drainage water recycling could improve things further. While water recycling practices seem new, the concept is actually rather old.

“The concept has been around for a long time but there is hardly anyone who has implemented it,” she says. “It was probably first done more than 30 years ago but what’s new [now] is, we are actively promoting it and researching it.”

Of course, taking land out of production for a drainage water collection pond is a bit of a mental hurdle for many farmers. Cost is undoubtedly a major barrier in adoption of water recycling practices Frankenberger explains. That’s why it is important to her that researchers continue the work they’ve started on trying to evaluate the economic impacts.

“Having water during the growing season can benefit the crops. If offers more benefits than most other practices,” she assures. “We are trying to get at how much benefit versus how much cost, so we can talk about the profitability, but we won’t have those numbers for another couple of years.”

Until conclusive evidence that drainage water recycling pays does emerge, King believes the best advice tile drainage contractors can offer farmers is to make sure their new tile installations can accommodate water management practices down the road.