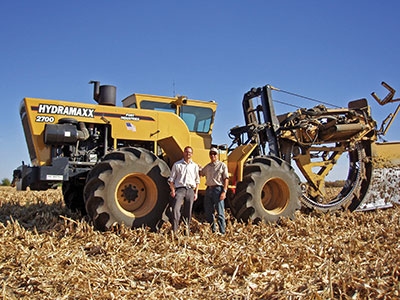 Rob Burtonshaw, a third-generation drainage contractor, has dedicated the past year to the study of land drainage. His passion for the business came naturally, but his pursuit to learn new techniques, find innovative technologies and talk to industry professionals is what makes him stand apart.

Burtonshaw is committed to studying land drainage and its role in farming’s future. In 2012, he was named one of approximately 75 Nuffield scholars worldwide. He is the first Nuffield scholar to focus solely on land drainage, and the award provides his travel funds for one year to bring new ideas back to Britain’s farmers and drainage industry.

Burtonshaw shared his learning experiences and preliminary outcomes with Drainage Contractor magazine in our November 2012 issue. His final research and conclusions will be presented to the Nuffield Annual Conference in November 2013. Until then, he continues to travel – talking to farmers, equipment manufacturers, researchers, and contractors – about what he knows best: land and field drainage.

DC: What is the land drainage industry like in your area (United Kingdom)?

RB: Agricultural land drainage in the U.K. has been shaped by the introduction and removal of government grants. After the Second World War, British policy focused on increasing agriculture production, and drainage was subject to grants, encouraging farmers to drain their land and increase yields. However, during the 1980s, the British government changed its policy and the grants were removed, but not before farmers invested heavily in land drainage, taking advantage of the grants while they were still available. Since then, very few hectares of land have been drained in the U.K.

Farmers in our area experienced one of the wettest years on record this past year, exposing many old drainage problems – and the need to drain fields could not be clearer. It’s no surprise many farmers are keen to talk about drainage now.

With the under-investment of drainage in the U.K. for the past 30 years, there is opportunity for industry expansion and I hope to use the Nuffield Farming Scholarship to improve our own drainage company, while promoting the importance and effectiveness of drainage.

DC: How did you determine where to travel and whom to meet?

RB: I started by asking people here in the U.K. for names and contacts of people they knew abroad. From these initial contacts I sent out inquires, asking to visit, and for recommendations of others I should meet. And then things just snowballed, and I had difficulty narrowing down the people to visit and fitting them into my travel schedule.

I was eager to travel to Canada and the U.S., where drainage research is more common. I tried to meet as many people as possible – including more than 60 contractors, eight machinery manufacturers, seven universities, six pipe manufacturers, countless farmers and representatives of local governments.

I have stacked up a lot of miles throughout my travels. And while some machinery salesmen may have travelled farther, my travels have been unique because I’ve talked to people in every aspect of the industry – from farmers to researchers, and fellow scholars to contractors like myself. I’ve traveled to Canada, the United States and the Netherlands. I also took the time to visit with industry representatives in the U.K., because the last thing I wanted was to travel halfway across the world only to be told about someone from home.

DC: What have you learned so far?

RB: The most important lesson so far is that enthusiasm is vital to any business. It can be difficult when a breakdown occurs or something goes wrong, but being positive and trying to drive the job and your company forward is what’s most important. Each place I visited had its own strengths and weaknesses. For example, nearly all the drainage crews in Ontario seem to be slick and work very efficiently, the trencher was never still for very long. I also noticed many American contractors seemed willing to embrace technology and use it whenever possible.

I have a long list of ideas I’d like to apply to our own drainage company at home. It ranges from small things like using a pipe cutting “spade” used by most contractors in North America to alterations to our own machinery. GPS grade control is another idea I hope to take back home.

DC: Were you surprised by any of your observations or outcomes?

RB: I found that only by speaking to farmers, the end users of drainage, was it possible to gain a complete understanding of the entire drainage market in the areas I visited. Similarly, one of the advantages to meeting pipe and machinery manufacturers was to learn about their perspective of the whole industry. As contractors, we often work with our heads down and forget about the bigger industry picture.

It was encouraging to meet fellow contractors who were very welcoming and open. This allowed me to gain an understanding of how they ran their companies and provided me a unique opportunity to learn from them, watching how others do the same job I do. I’ve often joked that my mission has been to take everyone’s best idea and copy them.

DC: Did you learn anything about yourself along the way?

RB: I feel very comfortable about my topic and area of research, and while most of my previous knowledge came from my father and grandfather, I now feel like I have a more rounded education and that I have seen more than most. And I’m more comfortable speaking in public now, already having spoken at a number of events about my research and the importance of drainage.

DC: What have you learned from fellow international Nuffield scholars?

RB: It’s almost impossible not to learn something when meeting a Nuffield scholar. Nuffield carefully chooses people with opinions and a willingness to express them. To be a Nuffield scholar you have to be involved with food production, so the expertise ranges across the farming industry. I have likely learned more about farming by talking to fellow scholars than from visiting thousands of farms each year, because when a drainage contractor visits a farm, the conversation focuses mainly on drainage rather than farming. A number of scholars in recent years have focused on soils, exploring subjects such as how to increase organic matter through cover crops or how to reduce compaction. While neither of these directly relate to drainage, drainage is all about soils – and the more information I can learn about soils the better.

DC: What do you predict to be the next big step in technology for land drainage?

RB: I suspect most contractors would agree GPS grade control will be the future, and for many this technology is already the present. There will come a time when laser graded machines will no longer exist, though I’m not sure if that will be five, 10 or 20 years away.

Satellite images are also likely to play a larger role in this industry because, like many others, I already use Google Earth regularly. The resolution of these images is improving and there may come a time in the near future when we will be able use them to conduct level surveys.

DC: What are your conclusions on the role of land drainage as it relates to the future of agriculture?

RB: While my studies aren’t complete yet, I’m convinced drainage is underappreciated and that we, as an industry, need to be more active in promoting its benefits. Buried a meter below the ground, it’s easy for farmers to forget about, or overlook the work drains actually do.

If predictions about world populations are correct, we are going to have to feed many more people, and we can only do this by becoming more efficient because we can’t produce more land. I’m also convinced that, despite vast improvements that can and probably will be made in the developing world, much of the grains will be produced in the most fertile and advanced areas. Drainage is a proven technology that can be installed almost immediately, and the resulting yield increases are significant. I can’t see how yields can be increased to the necessary level without drainage.

Farmers will still be draining land in 50 or 100 years from now . . . as long as we grow crops, we’ll be draining land. Here in the U.K., many fields still rely on drains that were installed in the 19th century. These drains have provided great service, but nothing lasts forever and many systems are starting to fail. Land drainage will continue because, after all, drains don’t last forever.

There is a moral duty to use the land as efficiently as possible, especially as pressure on the land increases. I can only see the amount of drained land increasing.

To read our first interview with Burtonshaw, click here.