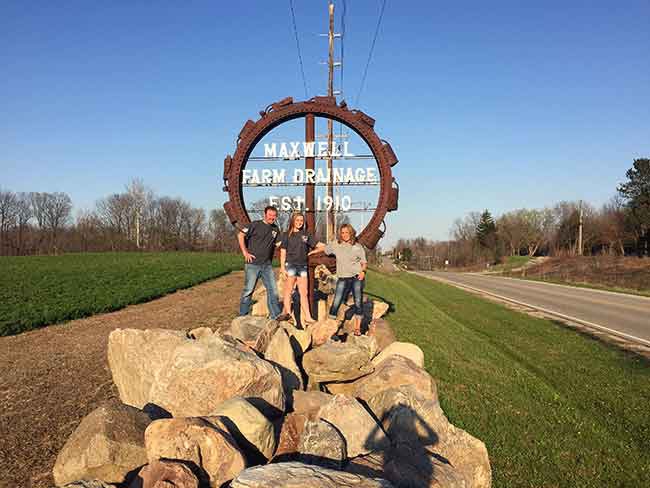 Digging ditches is in Bart Maxwell’s blood, going back four generations to 1910 when his great-grandfather, Alexander Maxwell, began laying clay field tile and building small bridges around Montgomery County in Indiana with his brother, Silas.

Three of Alexander’s 11 sons – Jack, Birle and Walter – followed in his footsteps full-time, while another, Bart’s grandfather, Ralph, helped out part-time. This sparked the interest in Maxwell’s father, Bart Sr., who took over Maxwell Farm Drainage in the 1960s.

“My great-grandfather and his brother started with slip scoops behind horses, and a lot of the work was done by shovel,” Maxwell says, explaining the family bought the first machines in the late 1940s. Maxwell grew up working with his father but after graduating from Wyoming Technical Institute, he began his career as a heavy equipment technician.

However, fate intervened when Bart Sr. passed away unexpectedly in 1999. Maxwell took a few weeks away from his job to complete some work his father had committed to and customers began asking him to think about taking over the business full-time. Considering the reputation his family built and the customer base that trusted and depended on the Maxwell name for more than 100 years, a 24-year-old Maxwell took over the business and believes he and his wife, Joellyn, have taken the business to yet another level.

Stepping in made him the 10th Maxwell to be involved in the family business. And it looks like the next generation may follow suit as his 13-year-old daughter Chloe is interested in the business and often helps him out in her spare time.

A changing industry
When the first Maxwells began the company, they installed drainage to take care of the worst areas in Montgomery County, including filling in a lot of open ditches and constructing the first water mains in the county.

However, aside from the invention of the basic wheel trencher in the late 1800s, little changed in the business until the 1960s when Bart Sr. took over the family business. Faster and more efficient chain trenchers and plows entered the marketplace, followed by the laser grade control system and game changers like GPS and plastic field tile.

“GPS is huge,” Maxwell says. “Nothing in the industry has revolutionized the business like GPS has.”

Maxwell explains GPS allows them to survey a field in 10 percent of the time, take information back to the office and design the system.

And weather is no longer the issue it once was. “Even when it’s rainy, foggy or windy, it doesn’t affect [our work] like it did when running with lasers, so we are able to run more days,” Maxwell says. “All of this happened within about a 10 to 15 year span. I don’t think we have ever seen a period of such innovation.”

Systems have also changed with tile spacings running closer together and decreasing the depth of the lateral lines. “We’re not putting lateral lines too deep,” Maxwell says. “We know we don’t want to be pulling water out that’s not adversely affecting the water table. We want to maintain a good water table.”

As water management and water quality has become increasingly important, the industry has increased the focus on drying the surface quickly, but not getting rid of moisture they might need later. “We have more controlled drainage and are conscious of the water we’re taking off that farm and saving it.”

Another change is a shift in thinking by the farmers who are now installing complete systems. Maxwell says 80 percent of their jobs involve tiling a complete field.

“When we leave, the farmer knows when he pulls into one part of the field that when he gets to another part, it’s not going to be too wet,” he says. “We tell farmers, we can get them on fields two or three days sooner, and many will say, ‘I’ll just wait those days then,’ but some years those two or three days can turn into two or three weeks if we get bad weather.”

Keys to success
As the oldest drainage company in Indiana, Maxwell Farm Drainage obviously knows what it takes to be successful. Putting their customers first and a reputation for quality work and getting the job done are some of the qualities Maxwell says sets his company apart from the competition.

“We don’t stop running. The weather has to get really bad; it has to get frozen out and be two feet deep [for us to stop],” he says. “And we stay ahead of our schedule and our customers have taken note of that. They know we’re going to get there and get it done.”

They recently completed their largest, single-owner job ever. Over three months, using two million feet of pipe, they installed a 1,400-acre drainage system in Darlington on a corn and soybean operation. The job consisted of a 20-foot pump system and included nearly a mile of 36-inch pipe.

“We can do up to 48-inch pipe with our machinery,” Maxwell says. “That sets us apart too.”

Looking ahead
After testing different designs and developing their own line of custom attachments, Maxwell grew the business even further in 2015 when he started Maxwell Drainage Innovations.

“I come from a mechanical background, so I love to get back to that,” Maxwell says. “Everything I look at, I think there has to be a better way.” Some of Maxwell’s projects, like spoolers – custom tile carriers that enable equipment to carry two rolls of pipe – and installation boots for plows and trenches to install single and dual tile pipe, have brought him success in other areas of the industry.

But for now, Maxwell is focused on maintaining the strong customer service standard that has been recognized for decades, as well as keeping up with what the future of the drainage industry holds.

“Maxwell Farm Drainage will continue to install pipe, grow to meet the demand of our customers and adapt to new technology in the drainage industry,” he says. “And we will build on Maxwell Drainage Innovations in the future too, continuing to research and develop new ideas and expand that company.”