A drainage business with a long and storied past is expanding to meet demand. 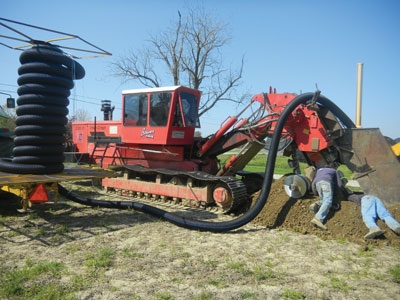 These are exciting times for this family business. As much as the flatlands and rolling hills of Ohio are fixtures of the landscape near Fremont

As much as the flatlands and rolling hills of Ohio are fixtures of the landscape near Fremont, so is Bower Tiling Service.

For over 110 years and five generations, the company has specialized in farm drainage – and business has never been so busy. “We’re still doing last summer’s work,” says company president Jack Bower. “We’re working through a big backlog, and some people are getting a bit impatient, but they know we’re doing our best.” Last year’s rainfall in Ohio set an all-time record, with about 20 inches more than normal, and farmers there are keen to prepare now for further wet seasons. Also, during the last few years farmers have done really well; most want to expand their acreage and they know drainage is a very important part, Bower adds.

A pride in the quality of their products and services, as well as a dedication to maintaining Bower Tiling Service’s great reputation, is shared by all family members and employees. Alongside Jack, his wife of 45 years, Sue, helps in the office when needed, his daughter, Wendy Jett, manages the office, and Wendy’s husband Jim Jett, is the crew foreman. Also working in the office is Jack’s sister-in-law, Michelle Picciuto; her husband Joe Picciuto is the company surveyor and estimator. Experienced equipment operators and crew include Tim Kreilick, Kipp Snyder, Marc Strausser, Nick Bower (Jack’s grandson) and Dustin Hetrick. Jack’s two other grandsons (13-year-olds Jack and Seth Jett) are learning farm drainage early and help out when not in school.

Bower Tiling Service started in 1900 with Jack’s grandfather George W. Bower, who used a steam-powered Buckeye Trencher at the time. Later, his sons Richard and William formed a partnership with their father, and in 1955, Richard bought William’s share of the business. Around 1958, George retired and left Richard to run the company, who later formed a partnership with his sons Jack and Tom in 1964. Richard retired in 1976 and the business went on to be incorporated in 1981. By that point, the Bower family owned one of the largest agricultural drainage contracting companies in the country, installing more than four million feet of tile annually – all within a radius of about 50 miles, an area that they still mostly work within today. In 1985, the Bowers created a second company, Great Lakes Inter-Drain Inc., which Tom owns and runs today. Great Lakes Inter-Drain continues to be successful in sales and service of drainage tools and providing consultation to contractors.

The farms in the Fremont area used to have more sugar beets in the past, notes Jack, and farmers mostly now grow the standard corn, soybean and wheat rotation, with some producing tomatoes as well. “Back in the 1960s and 1970s, our jobs involved 30 or 40 acres, but now when a grower buys a farm, the first thing he does is call us in to tile the whole farm of 80 to 100 acres,” says Jack. “It takes us about four or five days.” The Interdrain machines along with the addition of GPS systems have been the biggest changes in operations over the years, he notes, making jobs ten times faster. The larger equipment used these days means that soil compaction is a concern, but other factors can take precedence. “How much compaction occurs with any equipment obviously depends on soil types, but it rained so much last year that farmers said just go do it,” Jack notes. “But we try to do jobs when the land has dried off.”

Family values
Jack’s grandfather George instilled values that are still strongly held by family members today. “My grandfather was one of our favorite people,” Jack says. “He was a very hard worker, what you’d call a pusher. You either hate this work or you love it, and he loved it.” Jack remembers starting in the business early. “As soon as my brother and I could pretty much hold a shovel, we took part,” he says. “When it was just my Dad and Grandpa, getting close to the time that Grandpa retired, Dad would pull us out of high school if they needed us. What I picked up most from him is that if you do a good job for a man, he’ll always have your back.” The family still has Grandpa George’s first surveying instrument. “It’s in a box that he made himself and it’s important to us,” Jack notes.

Bower family members have been involved with the Land Improvement Contractors Association of America (LICA) since the 1950s. “I’ve served many years on the state board myself and Jim Jett has as well,” says Jack. Bower Tiling Service is also a proud member of the Better Business Bureau and The National Federation of Independent Businesses.

One of the biggest issues they faced over the years was a sales tax wrangle in the 1980s. “Farmers have always been exempt from paying tax for our services, but these tax agents didn’t see it that way and wanted tax money that went back about nine years,” says Jack. “They got the money from us – and it was a very large amount of money – but it was later proved that they were in the wrong. Today, all pipe is tax exempt for farm drainage.”

Jack points to fuel costs as a current challenge. “Fuel prices are hurting everyone,” he says. “A lot of companies put on a fuel surcharge, but we’ve never bothered with that. The price is the price.” All of the drainage outlets that Bower Tiling Service installs feed into watersheds that feed into Lake Erie. “The biggest issue environmentally [with this business] is that they blame a lot of pollution of the Great Lakes on farmers,” Jack notes. “Farmers take a lot more action to prevent runoff than others do, but farmers are easy to blame.”

While the next generation is taking on more responsibility, Jack says his attraction to the work will never lessen. “I don’t really know that I’ll ever retire, but I may goof off a little more,” he laughs. “We’re working things out within the business so that everybody’s happy in terms of the work they’re doing and making a living at it. So far, it’s going well.” He adds, “Everybody gives their input and that’s very important, but at the same time, we’re all aware that there has to be one person running things, who knows what’s going on with everything.”

What has always attracted Jack to the drainage tiling business is the variety of situations and constant learning. “You’re meeting a lot of different people, changing location and customer every week, and you always get a new challenge you have never seen before,” he says. It’s always a different scenario with different factors affecting each job, including city limits, park limits, property lines and roadways.” You have to make everyone happy, Jack explains. “The drainage outlet may be near a highway or through a neighbour’s land,” he says. “We figure out how it has to go, the most economic way for it to go, then we set up a meeting to go over it with everyone involved.”

He adds, “You think you’ve seen it all, but you haven’t. All the time, we see different old sets of systems from 100 to 150 years ago. A few weeks ago, we unearthed some 10-sided clay tile. I’ve seen hexagon and octagon shapes before, but never 10-sided. The farmer never knew it was there.” They keep a bit of the unusual historic pipe in a company collection.

“These old lines are generally not a problem with our machinery, as we’re usually just crossing them,” Jack notes.

To deal with the backlog of work and with farmers expanding their acreage, Bower Tiling is going to be doing some equipment upgrades. “These are exciting times for this family business,” Jack says.