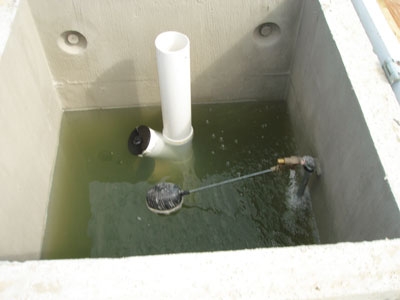 Sub-irrigation system. Although drainage is usually meant to draw water away

Although drainage is usually meant to draw water away, Canadian researchers are successfully irrigating through tile drainage and are improving crop yields not only through increased water uptake but also by reclaiming lost fertilizer nutrients.

The first of the two systems, the Long-term Crop Rotation Water Quality site, was established in 1959 to demonstrate the benefits of crop rotations, whereas the Great Lakes Water Quality site was constructed in 1991 specifically to study controlled drainage and sub-irrigation, and water recycling. On the Great Lakes site, riser pipes that were installed on existing tile drainage systems control drainage. Both sites were upgraded in 2008, with the addition of four storage reservoirs to capture and recycle surface runoff and tile drainage water at the Great Lakes site. Additional “real-time” measuring equipment was issued to the long-term site. Using these instruments, Tan and his team can now measure surface runoff and sub-surface tile flow year round.

Tan says that with his background in hydrology, it didn’t take long to establish that the prime conditions for nutrient runoff are when there’s residual nutrient left in the soil leading into the winter. With 70 percent of rainfall occurring outside of the cropping season in southern Ontario, it was easy to conclude that capturing and storing surface and tile drainage water during the non-cropping season would be the only means of intercepting sediments and nutrients. By pumping the same water back out of the reservoir during the next cropping season, all these nutrients, particularly phosphorus and nitrates, can be reused.

“In the summertime, you don’t have that much runoff so you want to encourage the crop to use water,” says Tan. “If the crop is using more water, it’s going to produce higher yields.”

In tests conducted from 2000-2005 on a Conservation Authority demonstration farm, Tan and his team demonstrated yield increases of 50 percent in soybeans and nearly 90 percent in corn with the controlled drainage and sub-irrigation combination. In a commercial growers’ field, processing tomato yield also increased 40 percent. The increase in production and cost savings makes up for the cost of taking land out of production for water storage.

“There’s no question about it from my point of view,” says Tan. “This is not only good for crops, it is good for the environment.”

“There’s no question about it, conservation tillage has a lot of advantages besides reducing soil erosion; you improve soil structure and use less energy,” says Tan. “But the disadvantages include nutrients coming out, in particular if you have tile.”

The improved storage of no-till soils promotes higher water in the upper levels of the soil profile, says Tan, which is a good thing during the cropping season but not during the non-cropping season. Dr. Dan Reynolds is one of the members of the research team who has been heavily involved in studying the relationship between tile drainage and nutrient loss.

After conducting an experiment that followed N fertilizer and a chloride tracer in the fall and winter through five agricultural soils, Reynolds was surprised by how fast and deep these nutrients moved down the profiles.

“We found, for all five soils, between 60-96 percent of the chloride tracer leached below the 60-centimetre depth over the fall, winter and spring,” says Reynolds. “So based on that, we’d have to say that the N leaching risk was high for all five soils, even though some of the soils had hydrologic soil group designations which suggested low leaching risk.”

In Ontario soils are classified by the Nitrogen (N) Index, which rates the risk for contamination of surface and ground waters by nitrate leached out of the crop rooting zone. Reynolds says that in the States they’ve been using N indexing for 20 to 30 years in various forms and Ontario’s version is a hybrid of the two main tiers. But it’s still based on hydrologic soil group and his research is making him think the soil survey information these designations are based on might be lacking.

Reynolds says farmers and drainage contractors need to have a better feeling for just how permeable the soil is and suggests collecting more of the fundamental data, such as saturated soil hydraulic conductivity, and designing your drainage systems partially on that, as opposed to solely soil texture, topography or tradition. To address nutrient leaching, he thinks controlled drainage is worth considering in fairly flat areas and where precipitation can be erratic.

“Controlled drainage will definitely decrease nutrient leaching losses, partially because it changes the hydrology of the field by slowing down the rate in which the water moves,” says Reynolds.

So far, Tan says, the system they have designed can reduce total nitrate and phosphorus losses by up to 40 per cent. But he warns that controlled drainage with sub-irrigation still requires care in order to avoid making higher surface run-off problems worse.

“Once you do sub-irrigation, the soil becomes moist and, with a heavy rainfall, you create more surface runoff,” says Tan.

“But when you think about it, you really have a win-win situation in terms of improved nutrient management and increased crop productivity.”

Expanding sub-irrigating technology beyond borders
Tan says there is renewed interest in drainage management outside of Ontario and even Canada. He says that in much of the Lake Erie basin, the majority of corn production areas have tile drainage and that his research is earning him some new attention, particularly in dry years.

“Our climate is changing to be drier but even if you only get 600-700 millimetres a year of rainfall, about 40 percent goes into the tile and surface runoff during the off season,” says Dr. Tan. “With that amount of water we collected in the storage reservoir, you can irrigate for two months, every day, without drying out.”

One of Tan’s colleagues in neighbouring Manitoba recently came to see the Ontario facility in operation. Bruce Shewfelt, a senior water and biosystems engineer, is developing parallel research and development activities on controlled drainage and sub-irrigation. He says addressing drainage management is becoming a hotter topic west of Ontario and to the south of him in the Dakota states.

“There’s been a lot of interest and uptake in tile drainage in the last three to four years and the industry is growing very rapidly here,” says Shewfelt. “Dr. Tan’s experimental setup is second to none and provides a great deal of information in a very controlled environment.”

Shewfelt says that in their own trials, they address the technical differences between the clayey soils Tan has worked with in Ontario and the fine sands of Manitoba’s special crops areas. Seasonal rainfall variations make drainage in the spring extremely important but in those same locations there is often a need for water by July and August. Manitoba growers of high-value crops could be particularly interested in sub-irrigation and controlled drainage says Shewfelt, if the large-scale studies he is conducting continue to support and build on Tan’s findings.

“In a year like this year when we didn’t really get much for spring moisture, if you’re considering means of adding water to the soil and you don’t have overhead irrigation, sub-irrigation might be a method to supplement water available to the crop,” says Shewfelt. “Our contractors and producers are certainly watching what we’re doing and waiting to see what the advantages or disadvantages might be.”