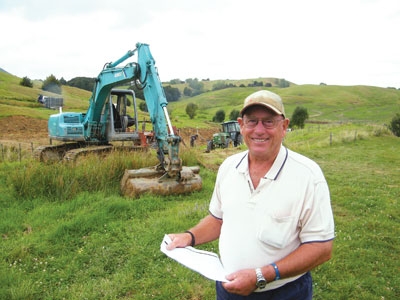 Just when you think you’ve seen most things unusual in drainage, you end up being surprised. Such was the case when we encountered Neil Carter, who operates his business in the northwest province in the north island of New Zealand. He operates Ditch Witch chain trenchers to install drainage systems for dairy farmers, sometimes on very dramatic terrain.

In February (mid-summer in New Zealand), Carter was working on a job where extreme slopes tested his equipment. The R100 Ditch Witch was digging uphill, at an eight percent grade with some side-slope, using its four-wheel steering to maintain direction. Immediately behind, a tractor and hopper cart applied stone backfill (called “metal” in New Zealand).

Great care must be taken by backfill operators, since roll-over is a constant threat. Sometimes an excavator is used to provide extra stability, holding the top of the backfill trailer with a cable. Occasionally, a path must be dug for the trencher if the cross-slope is too steep.

Designing drainage systems for this terrain is part science and part instinct, and Carter’s experience provides ample quantities of both. When he scans a hillside, he sees obvious signs that there is a drainage problem – like water-loving rushes – but he also sees where the top layer of soil has slipped downslope, this being the result of the top layer sliding on a saturated sub-layer. The trick is to intercept the water flow underground: “We want to cut off the water at the knees or chest, above the ‘rush line’,” he says. Often, the subsoil layers are stratified with some fine dense clay layers and the porous backfill performs an important role of intercepting horizontal flow of water in the profile. Trench depths on many slopes range from 1.6 to 1.8 meters (64 to 72 inches) and backfill metal is usually 0.45-0.60 meters (18 to 24 inches). “Metal backfill is expensive,” adds Carter.

His reputation is such that farmers will wait two years for him to get to their job and some will not buy a farm unless they know he can drain it for them. He recently received inquiries for two jobs for farms planning dairy expansion, at 25,000 meters (80,000 feet) each. A recent comprehensive job is an example of how some farmers are now viewing subsurface drainage as a vital part of dairy production. The whole farm was laid out for modern production methods, with fences and paths for dairy cattle to reach their paddocks from a central milking parlour, but this design was applied only after Carter had designed a comprehensive drainage scheme for the 600-acre farm, which is owned and operated by Ian and Gill Leeuwenburg. A total of 46,000 meters (150,000 feet) of drainage pipe was installed at 30- to 40-meter spacing (110 to 150 feet). “It’s their third farm and the others are mostly drained too,” says Carter.

Carter backs his work with a guarantee. In terms of return visits to repair something that has not worked, “It’s cost me just $1000 in 15 years,” he says. The warranty covers his work for the lifetime of the buyer. With New Zealand’s agricultural economy thriving, the drainage work should continue for the foreseeable future. Carter must decide how long he wants to continue in serving the farmers in his area: at the young age of 70, he is considering his options.