A look back with one of the inventors. 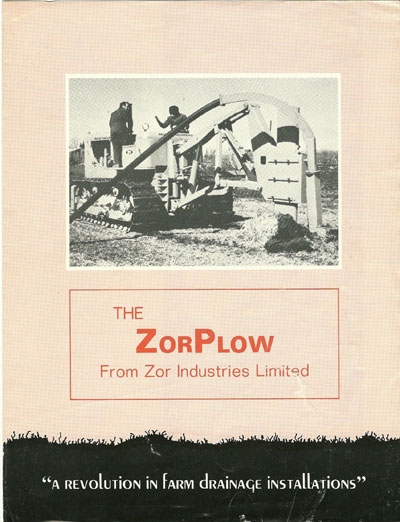 An original ZorPlow ad from the 1970s. The story of Ontario’s first double-link plow began with sugar beets. In the 1960s

The story of Ontario’s first double-link plow began with sugar beets. In the 1960s, the Redpath Sugar company of Chatham, Ontario, was doing a brisk business processing beets, and demand for more was very high. Farmers in the area certainly wanted to up their production, but to do that, they needed more drained land.

Tate & Lyle, the British company that owned Redpath, solved the issue by importing the high-speed Yates Badger plow from England to Canada, making it available for lease to tile drainage contractors in southern Ontario. By the early 1970s, many contractors had signed on for leases – but one contractor, Art Eddy of Woodstock, stood apart.

Eddy had little interest in leasing or renting a Badger plow, and the company would not allow him to buy one. “Art was a very determined man, and decided that he was going to build one himself, remembers Tony Paladino. “I only knew Art and Bob Hewitt (a future business associate) a little because we were all pilots flying out of the Woodstock Flying Club Airport. I’d never done anything for them.” At the time, Paladino owned an engineering design firm called Tritec Mechanical Equipment in Woodstock with partners Bob Elms and Bruno Ehrismann. Paladino is a born inventor who had his engineering degree, and was licensed as a civil engineer in his native Italy as well as in Brazil. Over his lifetime, he has come to hold several patents on plow improvements, tree harvesters and tree planters.

But getting a high-speed plow manufactured in Ontario was easier said than done. The Tritec team had a look at the problem, but decided that it would simply be too costly to design and fabricate a single plow. “However, Art convinced us that we’d have no trouble selling at least 10 of them, so we decided to proceed,” Paladino notes. “He and Hewitt would have gone ahead somewhere else I suppose, if we had refused, but they knew Bob Elms and I had worked in research and development at Timberjack and Timberland (forestry equipment makers) and they must have thought this was a very important asset.”

Different design
The first step for Paladino and Elms was to come up with an alternative for the roller linkage design of the Badger plow, which was patent-protected. That would be a challenge. After Elms had taken a close look at the Badger design (the brainchild of a Dr. Ainsley Ede of the Drainage Experimental Unit at England’s Ministry of Agriculture, Fisheries and Food), he was very impressed. He called Ede’s concept of a virtual hitch point projected by the radius of the rollers “ingenious.” However, ideas eventually came to the team, and after a trip to the US to see a plow researcher named Jim Fouss, the Tritec designers went to work on their own double-linkage system.

“If you can believe this, we actually used a Meccano set to build our first model,” Paladino explains. “We tested it in a sand trough, plowing about a foot deep.” The lower links in this plow design were adjustable, with the rear linkage completely free to float. Prototype construction followed, with the assistance of local welder Ron Hall. The team also found local expertise to do stress relief and line-boring on the post and the links. The design included a diagonal sliding link that would enable, using a rope to release a latch, the raising of the blade from the ground. (This was eventually replaced in production models with a hydraulic cylinder.) Testing of the prototype was conducted in summer 1972.

Controlling the plow
Paladino was and still is a model airplane enthusiast, and with this experience under his belt, he created a radio control system to hold the plow on grade for the first tests. “I’ve designed, built, flown (and crashed and repaired!) radio-controlled model airplanes since I was 10,” he says. “To control a model airplane with radio, a signal from the transmitter is received by the aircraft, which makes a servo-control lever move in a given direction. I applied this system to the prototype plow by having a servo-control lever push or pull the spool of a solenoid valve, that in turn opened or closed the flow of hydraulic oil to the main lift cylinder of the plow.”

However, the system didn’t work properly at all because the operator’s eye could not accurately follow the target at the plow. “We found out there was a laser system that was developed by Dave Studebaker (grandson of the famous car manufacturer) in Dayton, Ohio,” remembers Paladino, “and we got a bank loan to buy that.”

The first production run of what they named the “Zor Plow” occurred in the fall of 1972. It was manufactured at the Zor Industries plant in Woodstock owned by Hall, Paladino, Elms, Eddy and Hewitt. The first model was the DP-200, which weighed 13,000 pounds and could install pipe within a quarter of an inch of the setting, to a depth of six feet. “This accuracy was mostly due to the second linkage at the rear of the system,” says Paladino. “It did the job of the rollers on the Badger, without infringing on their patent, and it worked great since day one.”

Distribution of the Zor plows in Ontario was handled by Kraft Machinery, and US sales were handled by Eddy. Zor plows also travelled to Europe. A DP-300, for example, was shipped to Mastenbroek in 1976 and appeared at England’s “Farmers Weekly” demonstration that year as the 25/20 Trenchless Drainer, the first self-propelled double-link drainage plow. It was powered by a V10 Deutz with 260 horsepower and had independent hydrostatic track drives. In addition, Paladino sold a DP-200 to a company near Modena in Italy. “The chief engineer of this company visited Woodstock before signing the order,” he says. “Art, Bob Hewitt and I gave him an airplane ride to see the ZorPlow in action, and as soon as he verified the grades on the ground, he gave a down payment.”

Indeed, orders were coming in fast, but business interests began to shift among the partners. Hewitt bought out the others at Zor Industries. Paladino designed the DP-300 and other models for introduction in 1976; mounted on a Fiat Allis 21B, the DP-300 installed pipe up to 24 inches in diameter to six-foot depths. Elms and Hall worked on building a new plow (the Canteco Wedge Plow) in 1975, going on to establish a new business with Bob Shillum in 1976. Meanwhile, in 1975, Kraft Machinery had sold the first Zor Plow in Quebec, and before the year was out, began building its own model (the Krac Plow or Krac Charrue) in that province.

When asked how he feels about the fact that the design elements he and Elms created long ago were being used in numerous double-link makes and models that emerged, Paladino is philosophical. “I think I can speak for Bob (who retired long ago) and myself to say that we are both really glad to have given to the world this fantastic machine for all to use in order to improve productivity on farms,” he says. “If so many companies copied us, that can only be a statement to confirm that we were correct on the design. It’s a great honour to be copied by so many. The Wright Brothers had the same honour!”

Eddy and Paladino stayed connected and by 1977, had built the Link 250, which could reach a depth of seven feet. Eddy set up the “Eddy Oxford” shop at his farm near Woodstock, and both he and his son Bill sold their Link plows throughout North America. In 1977, Eddy Oxford had also introduced model 75 for farm tractors, and in 1979, the model 175 for smaller dozer tractors. In 1981, the 175 was used in a new self-propelled plow called the Link 500. It featured an independent hydrostatic drive with a seven-foot plowing depth, tracks driven from both ends and the option of 285 to 320 horsepower.

Fast-forward to 2011. Dave Stevens, owner of Dave Stevens Drainage Ltd. in Tillsonburg, Ontario, was speaking to Bill Eddy about how he thought there was a strong market for an old-school, Ontario-made, double-link plow. “Bill said to Dave that he knew one of the designers who created the very first Ontario double link plow – me!” says Paladino. In February of 2012, they convinced Paladino to come out of retirement to resurrect the Link plow design – and he’s had a very busy summer. Make sure you read the New Designs section to learn more.