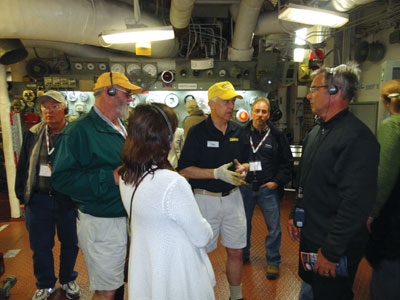 The pre-tours were extremely popular and fun was had by all. Members were amazed and informed while touring the USS Midway, a ship that has completed almost 50 years of service and seen combat in Vietnam and the first Persian Gulf War.
At the San Diego Zoo, people could see all the animals by foot, bus or even air! The Skyfari aerial tram was definitely a new way to see a zoo and there were more than 4,000 rare and endangered species at this zoo for all to see.

For the third year in a row, LICA members were able to test their racing skills at the Miramar Speed Circuit. The track featured three hairpin turns, two straight-aways and a longer course that put the participants through their paces. The competition was fierce. Chris Smidler of Indiana finished in first place, Bob Clark of Indiana in second place, and Tony den Hoed from Volvo in third place.

All of the educational seminars were well received; members learned about national LICA benefits, fleet safety and security, 10 critical business insurance mistakes to avoid, and negligent entrustment and non-owned auto exposures from some very well-spoken and respected speakers.

The committee meetings and executive meetings were very productive and everyone shared their important thoughts and ideas.

At the Hawaiian-themed Associates’ Night there were more than 20 exhibitors and people packed the room in leis and grass skirts! Make sure you check out www.licanational.com for the pictures.

Before everyone said goodbye they attended the Caterpillar Awards Dinner, where Brad McArdle was presented with the 2011 Contractor of the year award. Harry Hauschild won the 2011 Entrepreneur of the Year award. The Minnesota Chapter of LICA won the 2011 Top State award, which Nordis Estrem and Kevin Bakken, Mark Morriem and Don Loken accepted. Veronica Seevers won the 2011 Contractor’s Wife of the Year award. The Ohio Chapter 2011 Kemps Award went to Louis McFarland and the 2011 Handor Award went to Wayne Litwiller. After the awards and dinner, the group was entertained by comedian Brad Upton, who had members laughing from beginning to end.

It was an incredible convention that will not soon be forgotten!

Study: Can crop residues clean up drained water?
The Agricultural Utilization Research Institute (AURI), an organization committed to providing scientific and technical assistance to Minnesota industries and entrepreneurs, is conducting a 15-month study testing the ability of crop residues to clean up water drained from agricultural lands.

AURI’s study is focused on bioreactors, also known as biofilters, which have historically been made from wood chips or straw. The high cost of these products encouraged AURI to research other available materials producers could use. AURI is evaluating and comparing the effectiveness of agricultural residues versus wood in bioreactors, offering a potential use for agricultural byproducts such as corn stover, and wheat and barley straw. These fibers could also increase bioreactor efficiency, improve drainage water quality and potentially increase the number of acres that a single reactor can treat. Bioreactors can reduce nitrate concentration in drainage water by 30 to 70 percent.

The project is occurring at the USDA-ARS lab in St. Paul, Minn., the results will determine which products have the potential to warrant in-field testing.

Born in Sainte-Rosalie, Laflamme comes from a long line of farmers. Early in his life, he was fascinated by agriculture and demonstrated his talent for managing a company. In 1968, he bought his father’s 32-hectare farm, which included 17 dairy cows. Today, the family business, called “La Ferme Roflamme,” cultivates 1,000 hectares and has a herd of 90 dairy cows.

In 1981, at age 34, Laflamme became one of the youngest recipients of the Gold Medal of Agricultural Merit. In 1992, along with other shareholders, he bought a poultry farm in limited partnership. As a result of the success of this formula, several other acquisitions of the same type were made. In 2001, he was the first recipient of the Ernst & Young Entrepreneur of the Year, Agriculture Sector, with La Presse, TVA and Global as national sponsors.

A great visionary, Laflamme has been involved in numerous other endeavors and many other accomplishments throughout his career, mainly related to agriculture. He is considered a role model in the business world and a very successful farmer. We are very pleased to count on the expertise of such an exemplary man.

Baker is a veteran of the drainage industry with over 30 years’ experience and a tremendous reputation for customer service and business excellence. Completing the Technical Service Provider training has been an official step for him to assist producers in using conservation practices on their land by developing Drainage Water Management Plans.

The USDA and NRCS are building the amount of certified professionals in private businesses, non-profit organizations and public agencies that are able to provide technical service for such conservation practices as drainage water management because the public’s interest and the government’s funding of conservation are increasing. The USDA needs qualified individuals to help with implementing conservation practices and assisting producers in developing plans for such practices.