Although technical glitches still pose some challenges, GPS is now standard in many contractors’ toolkits. 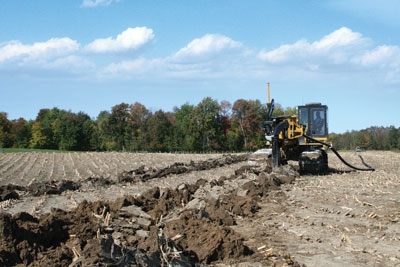 Up to 85 percent of Ontario contractors are using GPS. As much as 85 per cent of the tile installed in Ontario these days is laid using GPS. Despite widespread uptake of the technology by contractors

As much as 85 per cent of the tile installed in Ontario these days is laid using GPS. Despite widespread uptake of the technology by contractors, there is still room for improvement.

That was the takeaway message from a talk called “Installing Tile with GPS: A Panel Discussion on What We Have Learned,” held Jan. 18 during the Land Improvement Contractors of Ontario (LICO) 53rd Annual Convention in London, Ont. During the half-hour session, Premier Equipment’s Philip Horst, GeoShack’s Dale Stephenson and  Steve Pym, and AGPS’ Nate Cook shared the lessons they have learned from working with GPS technology over the years.

Moderator Gerald Neeb of Roth Drainage opened the session with a discussion about poor and dropped satellite signals. A number of contractors reported encountering bands of interference that caused signals to drop in roughly the same area on each pass across a field.  This phenomenon wasn’t news to panel members.

“The only thing I’ve been able to figure is some sort of radio transmitter – directional antenna – through that area floods the spectrum enough that it doesn’t get all of [the satellites] cleanly,” Cook said.

One contractor in the audience speculated that the problem was with the radio signal rather than the satellite signal.

GeoShack’s Stephenson agreed that frequencies are a likely culprit in this scenario. He noted that there’s more potential for interference in the 450-megahertz frequency range than in the 900-megahertz range.

Technical difficulties with user interfaces were also up for discussion. One contractor reported that over the summer, his equipment kept generating error reports. On three occasions, the only way to get everything up and running was to perform a dealer refresh. The refresh dumped all of the custom parameters installed on his system; they had to be reinstalled after each refresh. To minimize downtime in the future, the panelists advised that custom parameters should be backed up to a database. This way, a contractor can get his equipment up and running more quickly after a dealer refresh.

Stephenson then steered the group into a conversation about features and tools they would like to see incorporated into future equipment and software releases. Horst recommended a feature that sets target elevation at a point in the line. That point could then be used as a frame of reference to calculate the slopes for all other points along the line. The audience offered up suggestions too, including a feature that lets users cross-reference top and side views of the terrain, snapping between views in order to better understand a field’s landscape.

While on the topic of future tools for the industry, Neeb wondered if lateral spacing controls might one day allow a contractor to put a machine on automatic and make a run while maintaining a predetermined distance between rows of tile. Cook explained that an experimental, real time kinematic (RTK) auto-steer plow directed by a second, front mounted antenna is currently under development in the U.S. At the moment, there are some bugs that need to be worked out of the system.

“We’ve had a little bit of trouble with lost accuracy where it drifted a little bit and wasn’t holding the line as close,” he explained. “The best way is to go full RTK – of course, it’s more expensive that way.”

Cook advised that the main expense associated with this feature will likely come down to the cost of investing in a second GPS system; the investment in software will probably be minimal.

Several contractors in the audience wondered whether this type of system would create problems for users operating their base station through a cellphone. Cook said that this depends on how far the cellphone is from the cell tower.

“RTK accuracy still depends on how far away you are from your base station. Whether you get your connection through a radio or through a cell phone, it’s just a difference in the wireless technology,” he explained.

Toward the end of the session, one audience member asked about limiting factors, questioning whether it is GPS technology, electronic capability, hydraulic flow or machine speed that currently sets a ceiling on how much tile can be installed, and how precisely it can be installed.

Cook speculated that the number of satellites currently available to GPS units on the ground is the main limiting factor at the moment. He pointed to the interference and dropped satellite issues discussed earlier as evidence.

Pym argued that machine capability and field conditions are the main limiting factors facing the industry.

“GPS we take from the construction industry, and we can basically run the dozer as fast as you want to drive it and control the grade. I would say at this point it’s conditions of the field, conditions of the job, things like that that are going to be your limiting factor as far as GPS grade control.”

Cook suggested that integrating more pitch and roll sensors into equipment may help here, as sensor data may allow users to anticipate grade changes before GPS detects them.

Although this year’s convention highlighted issues that still need to be ironed out, Neeb said that GPS technology will probably take a hiatus from the LICO convention agenda for a while, until there are new developments to discuss.