News
From the ground up

Word of mouth and social media spread the word for this successful drainage company. 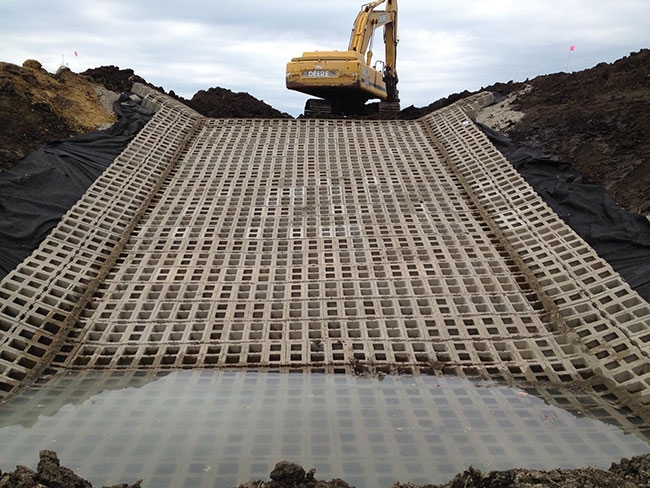 One recent project included building a block chute through the natural resource service to stop erosion into an open ditch on a large watershed. Photos courtesy of Bedolli Excavating and Tiling Like many successful businesses

Like many successful businesses, Bedolli Excavating and Tiling, Inc. in Buffalo, IL, grew out of necessity. Andy and Brittany Bedolli, a husband-and-wife team, started with a backhoe, a bulldozer and an excavator in 2006 when they needed to make improvements to their family’s farm and soon found themselves on neighboring farms repairing tile holes.

In 2007, quickly recognizing the need for more equipment, they upgraded the excavator to a newer machine and began doing tree line removals, small drainage repairs and maintenance on neighboring farms. Three years later, they purchased their first Port Industries wheel trencher machine to do their own drainage. From there, word of mouth spread the news and they were open for business. They incorporated in 2012, bought a pull-type plow they could haul with their 850K bulldozer and never looked back.

As the need for tiling increased in the region, so did the Bedollis’ needs for additional equipment. In 2013, they purchased a new wheel trencher that gave them the ability to install tile up to 24 inches, important for those larger main projects. In 2015, they added a Bron self-propelled tile plow with special boots that allows them to install tile from four inches up to 18-inch dual-wall tile.

“We have continued to upgrade equipment through the years,” says Brittany, explaining they now have a full fleet of equipment and employ three full-time and two part-time employees to meet all of their tiling and excavating needs. “When we are not putting in field drainage, we are working on drainage district projects, bridge projects, waterway construction, pond construction and various site demolitions.”

A family affair
Married in 2007, Andy and Brittany have grown Bedolli Excavating and Tiling together. Because it is a small business they both wear many hats while also juggling raising a family (the couple have three boys in elementary school) and other jobs (Brittany works full-time for a local auction company and they also farm with Andy’s uncle). Andy is the primary planner and organizer/operator with Bedolli Excavating and Tiling while Brittany works more behind the scenes to keep the day-to-day operations running smoothly.

“I try to help Andy as much as I can,” says Brittany. “The days that I am not at the office or on the road at an auction, I am usually on the job site.”

That can mean operating bulldozers to help backfill dirt, driving the tile stringer cart, flying the company’s drone, taking pictures or riding along with Andy.

“During the busy season, that is the only time we really see each other,” she says. “Our date nights usually include parts runs or looking at the next job. We never really leave the tiling business at the end of the day.”

The couple also shares a love for antique equipment. They collect antique tractors, and turn-of-the-century tractors have become Andy’s hobby.

“I buy them from people, get them running and use them all summer at tractor shows,” says Andy, explaining that he completely disassembles some of the tractors and rebuilds them to free up parts that have seized or rusted past being repaired. “I recently found a 1944 Buckeye trencher that had been sitting for many years, they thought since the 1980s, and I am working on getting it going to do demonstrations at old tractor shows.”

The kids are following in their parents’ footsteps. They attend various plow days in the early fall with their dad, and each of their children has learned to operate their own small tractor.

One recent project included building a block chute through the natural resource service to stop erosion into an open ditch on a large watershed. Photos courtesy of Bedolli Excavating and Tiling

Making it social
Over the years, the company has developed a successful social media presence, starting with Facebook, then adding Instagram and Twitter as they saw how popular those platforms were becoming. Twitter has been particularly successful for them as Brittany has built up a following of more than 2,000 people since joining the platform in 2013.

That said, the Bedollis don’t use social media to just gain followers and likes. Their main goal is to help educate people about field drainage, and drainage in general. They do this primarily by using pictures and videos describing the different projects they are working on. They also offer a behind-the-scenes look at the business, as they’ve discovered that’s what their customers and other followers like to see.

Brittany believes social media is a powerful tool that drainage contractors should consider using, especially since it is free.

“With a little marketing budget – or no budget at all – you can create a great platform to tell your story and introduce people to your products,” she says. “If you want to market your business or to increase information about your product or service, social media is a great outlet.”

It’s also a good way to meet other individuals in the industry.

“A few weeks ago, we had a fellow Twitter friend come from Canada to our job to see how we installed our drainage products…so social media can be used to help each other out as well,” Brittany says.

She does warn against Internet trolls or individuals who do not understand the product or service and can spread fear or fake information, but as a free marketing tool, it can be worth the risk.

Keys to success
While a love of what they do is part of their success, the Bedollis also credit customer loyalty and doing the job right.

“In the 10 years with our business we have not traveled very far from our shop,” Brittany says. “We have been very fortunate with repeat customers and building trusting relationships within our own community.”

“Some customers use us every year for various tiling or excavating projects,” she adds. “These same customers, we have found, have helped our business just by spreading the word about us at the local coffee shop.”

One reason for this is because the Bedollis strive to do the job right.

“We don’t want the customer to ever worry if their job was done correctly or if they have a question that they can’t call us,” says Brittany. “We work very closely with the landowners and tenants throughout the entire process.”