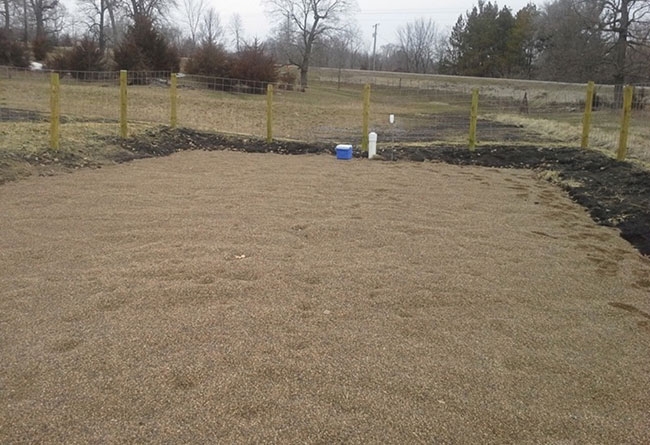 Site photo of iron-enhanced sand filter shortly after construction. Photos courtesy of John Gulliver. A new project by researchers at the University of Minnesota could eventually have implications for phosphorus removal

A new project by researchers at the University of Minnesota could eventually have implications for phosphorus removal from tile drainage systems on both sides of the border.

John Gulliver, a professor in the department of civil, environmental and geo-engineering and resident fellow of the Institute of the Environment at the University of Minnesota, was the lead on a four-year project that examined the efficacy of iron-enhanced sand filtration (IESF) in removing dissolved and particulate phosphorus from tile drained water.

Filters like these are already used around Minnesota for urban drainage as a best management practice for storm water runoff, Gulliver says. This is the first time such a system has been tested for use on agricultural land.

Phosphorus can be in two forms – particulate or soluble (dissolved). Methods typically used in storm water control are sedimentation, in wet or dry ponds, or filtration, in sand filters. But neither method captures soluble phosphorus (typically phosphate).

That’s where the iron comes in, explains Gulliver. When iron filings are added to sand filter media, the iron rusts and the negatively charged phosphate is attracted to the rusted iron’s positively charged ferric ions. “The phosphate binds to the filings,” he says.

The system has advantages over the use of constructed wetlands for phosphate removal, which adsorb phosphate for a limited time but not permanently, says Gulliver.

“After a while the plants start degrading and the wetland can release more phosphorus than comes into it. It can work for a while but then you have to dig it up and start over.”

What the IESF does is pull phosphate out of the water column – for good.

At year four of the project, the team saw a total of 66 percent phosphate removal from the site – an impressive achievement rivaling that of newly constructed wetlands.

IESF design and study findings
The study’s main objective was to evaluate how effectively the IESF could remove phosphate from tile drained water.

The IESF was designed so the filter media surface lay about 30 centimeters below the natural topography; drain tile water was intercepted to flow over the surface of the IESF, with berms installed around the edges to provide storage volume.

The media bed measured 6.1 meters wide by 15.2 meters long and 30 centimeters thick. Below that was a layer of pea gravel (15 centimeters thick) surrounding a PVC perforated pipe underdrain system to collect water after filtration.

After passing through the underdrain system water was discharged into a nearby ditch.

For these monitoring periods, flow rate data was separated into two categories – rainfall event and baseflow, with baseflow defined as periods with a flow rate less than .28 liters per second.

Roughly 90 percent of the measured tile drainage corresponded to rainfall-induced events and approximately 10 percent corresponded to baseflow. Thirty-three rainfall events were recorded during the study’s duration.

Samples were collected from within the inlet pipe (influent samples) and where the underdrain pipe connected to the discharge pipe (effluent samples).

“Routine and non-routine maintenance performed since installation of the IESF resulted in a reduction between influent and effluent total phosphorus and phosphate loads on the receiving water body for all rainfall-induced events measured during this study,” writes Gulliver and colleague Andy Erickson, a research associate at the University of Minnesota, in the study’s publication in the journal Water.

Gulliver says the system cost roughly US$30,000 to install, of which the iron filings, sourced from junkyards specializing in turning old machinery into filings, cost between US$3,000 and US$6,000.

The team did not consult or work with drainage contractors on the project – the IESF was installed using a front-end loader. Another contractor brought in sand, and the team mixed the media with a rototiller.

In Minneapolis’ urban storm water control context, the city generally makes deals with landowners to maintain the system for two years, after which the landowner takes over the responsibility. But maintenance requirements are minimal, says Gulliver: all that’s really required is weeding.

Looking ahead
As this is the first time such a system has been tested in an agricultural context, there is no precedent for tile drainage contractors on either side of the border for designing or installing IESFs. But IESFs could theoretically join the ranks of other water treatment systems already in contractors’ arsenal.

IESF design considerations
The IESF must be allowed to drain; therefore the outlet of the underdrain system must be placed above the high-water elevation of the downstream conveyance system.