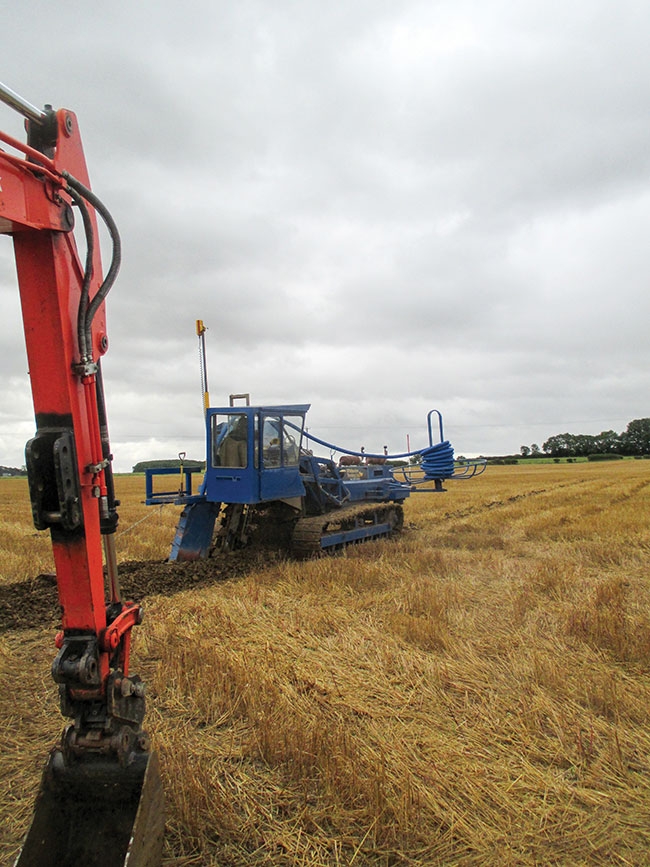 At work with the Mastenbroek 20/15 chain trencher. Learning the trade of farm drainage is often a handed-down

Learning the trade of farm drainage is often a handed-down, hands-on experience from one generation to the next. In one instance though, it has also included a transfer of knowledge and practical experience internationally.

What transpired was an apprenticeship beyond the home-learned variety, which was eventually taken back home.

Curious about the tile drainage business in North America and specifically in Canada, Tom Whittemore, a U.K. contractor, decided to learn more. The industry in the U.K. was almost at a standstill and he was eager to continue in the business his father had started in the 1960s near Chester in northwest England. What followed was a whirlwind trip to Ontario and Michigan to see the latest technology contractors were using.

Interestingly, at that time several contractors were looking at their succession plans and Whittemore learned there might be opportunity to emigrate and work in the industry, and perhaps find himself in an equity position after a few years. He was encouraged by a few discussions with contractors and personnel from the Ontario Ministry of Agriculture and Food, which oversees the land drainage business. He decided to take a plunge, uproot his young family, and apply for immigration to Canada with a promise of employment from an Ontario contractor.

One of his first commitments was to enroll in the series of drainage courses provided by OMAFRA. The courses are operated to ensure that all tile installation complies with the Drainage guide for Ontario, within Regulation 18 of the Agricultural Tile Drainage Installation Act. There are primary and secondary courses for machine operators and a third course to qualify for contractor status. Individuals passing these courses are awarded certificates. The program is the only such program offered in the world, following passage of legislation in 1973, though contractor ‘short courses’ have been offered for about 100 years in Ontario (more information on the courses and the licensing program for operators, contractors and drainage installation machines is available at www.omafra.gov.on.ca/english/engineer/facts/01-063.htm).

Whittemore worked with a couple of contractors over the following two years, then while awaiting his final immigration papers to arrive, set up what was to be a promising relationship with a contractor who was planning to retire. In the intervening period, he had a Class ‘C’ license, was on his way to achieving his Class ‘B’ and ‘A’ licenses, which require accumulating 250 hours and 500 hours of machine operating experience and was signed up for the advanced course. His attendance at the annual meeting of LICO (Land Improvement Contractors of Ontario) also helped gain understanding of the business.

As time was nearing for the final papers to arrive, bureaucratic bungling came into play. His immigration application papers had been misplaced and he was instructed that he would need to re-apply at his own cost. Appeals to authorities, members of Parliament and assistance from staff at OMAFRA achieved nothing, So Whittemore reluctantly, and at great cost, decided to head back to England with his family. A last minute call from Immigration Canada after officials had located his application came too late.

What was Canada’s loss in accepting an immigrant with the desire and drive to succeed has turned out to be the U.K.’s gain. Whittemore Land Drainage is now a viable and thriving contracting business, operating out of Oakham, Rutland, England. At first, the business used a leased self-propelled Mastenbroek 35/20 trenchless machine and now is in the final stages of trading his Mastenbroek 20/15 chain trencher for a larger model, a used Mastenbroek 30/30 chain trencher.

Importantly, the Ontario experience has given Whittemore the knowledge that enables him to show U.K. farmers there is another way to drain farmland, “with more pipe per acre and better drainage performance,” he says. His projects now feature 3.2 inch (80 millimeter) pipe laid at 35-foot (10 meter) spacing. This compares with recent traditional spacing in the U.K. of 140 feet (40 meters), with stone backfill to within 12 inches (30 centimeters) of the surface. The landowner would normally cross drain the field with a mole drainer every few years to improve water flow to the wide spaced drains (see sidebar). Closer-spaced drains will allow the user to eliminate this pass with additional equipment, which fits with modern field management in the U.K.

At work with the Mastenbroek 20/15 chain trencher.

The costs of draining with closer spacing works also. Whittemore is able to work a two-man crew: himself operating the trencher and another man to make connections, bring tile to the machine and backfill the trenches. “An operation installing with stone backfill, needs a much larger crew, a specialized stone backfiller, stone delivery equipment and extra loaders and tractors, all of which contribute to soil compaction and site damage that needs remediation,” Whittemore explains.

As the concept of closer spaced drain lines is getting more discussion, Whittemore can see where he might need to invest in a trenchless machine. “I have already had a positive reaction to the idea of trenchless drainage,” he says. Customers realize how using a trenchless system reduces soil compaction at work sites. While using a trencher, they have been able to see how he is ensuring all existing tile are connected to new systems and he can illustrate how using trenchless machine will eliminate old tile systems by altering the layout direction of laterals. He tries to place drains slightly deeper than existing tile for this purpose. Mostly, he uses the layout he learned in Ontario of trenching diagonally to fencelines to sever existing tile frequently, thus decommissioning them. He emphasizes to clients that a diagonal layout also improves trafficability of farm operations.

One large dairy operation near Chester, U.K., which milks 1,200 cows, has already noticed the benefit of this. Harvesting 280 tonnes per hour of forage corn (maize), Grosvenor Farms’ field manager, Charlie Steer, appreciates the difference at harvest as well as when planting crops. Others are reporting better soil structure recovery.

As his business grows, Whittemore expects to use GPS more extensively. Currently the trencher is fitted with Trimble laser grade control, but the operation uses a GPS guided tractor fitted with a sub-soiler leg to mark out parallel lines for trenches once the layout is determined. After finishing each run, the machine is backtracked over the next one to check grade changes. He also expects more farms will realize the benefits of closer spacing and hopes they will look to him as the one with the experience, knowledge and qualifications to do the work.

Why use stone backfill?
The use of stone backfill material in most U.K. drainage is that there has been a long-held tradition for using mole drainage, especially in very heavy soils. Well-formed mole drains can last for years if created when the subsoil is moist and ‘plastic’. They are made by pulling a blade fitted with a mole expander through the soil at a constant depth. Moles are made at an angle to tile drain trenches, which are backfilled with stone, thus allowing the water to reach the drains.

Following World War 2, the War Ag program in the U.K. provided grants to farmers for installing drainage systems. The grant aid specification called for 40 meter spacing, stone backfill and moling. The program provided aid until 1984 when it was phased out over five years. The business of draining farmland then took a nosedive, but the tradition of using wide spacings and stone backfill remains.

Peter Darbishire was editor of Drainage Contractor from 1978 to 2008. He is an honorary life member of the Land Improvement Contractors of Ontario.