How pipeline construction is impacting the business of drainage contractors in the Midwest. 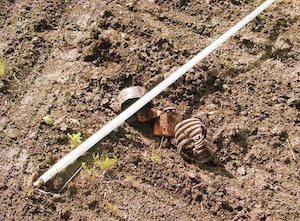 Broken and damaged tile is often encountered during pipeline installations.

The impact of gas pipeline construction on agricultural drain tile has become a hot topic in the midwestern United States.

It’s not a new issue – in much of the United States, drain tile has been used for agricultural purposes for at least a century, and potential for damage has existed as long as the oil and gas industry has been constructing pipelines. In Ohio, several pipelines have been proposed by Nexus gas transmission, Energy Transfer, Kinder Morgan and Columbia Pipeline Group, recently bought by TransCanada.

The risk is well-known by all stakeholders – gas companies, landowners and contractors – but perhaps felt most by farmers who rely on tile drainage.

“From the standpoint of Fairfield County, it’s extremely critical to make sure that tile stays in place: some of it has been in for over a century,” says Jonathan Ferbrache, a professional landscape architect and resource specialist with Ohio’s Fairfield Soil and Water Conservation District. “If the pipelines criss-cross and do damage, it could have a long-term agricultural impact in the area.”

Ferbrache has been involved in construction projects across the state. He says that when a pipeline is constructed across an agricultural property, if the landowner signs a contract allowing the construction, they may relinquish a “perpetual right” to do repairs or lay new tile in the pipeline area. “If you’re a unique property where the pipelines have been in for 100 years, you could have seven or eight pipelines crossing your field,” he says. “So it makes it difficult for day-to-day business if they’re not properly marked and inspected.”

Rob Hamman is a farmer and drainage contractor with Watershed Materials, an Ohio-based company that offers products related to watershed protection and management.

He says gas companies are required to hire a contractor for a pipeline “spread” – a certain length of pipeline – and take care of any damages to agricultural land.

“The company putting the gas line in an agricultural area is responsible to do everything – fix it, re-grade, reseed, re-establish everything,” he says. The contractor is responsible for every aspect of the project and can either complete necessary repairs themselves, or subcontract repairs out to drainage contractors.

Since 2009, drain tile damage has increased with the number of pipeline projects in central Ohio, meaning Watershed Materials has had its hands full over the last few years. “In the section through central Ohio farm ground, more than 2,000 drainage tiles were cut in 100 miles of pipeline,” he says.

“I think growers were upset at the quality of the repairs after the fact. Some of the contractors weren’t prepared for the amount of drainage tile they were getting. Some of them were not familiar with drainage tile and didn’t take it as seriously as they should have.”

According to Hamman, the pipeline companies involved in those projects repaired all of the damaged tile and offered landowners two-year warranties. But the growers, in many cases, were still unhappy with the quality of the repairs.

Case by case
The extent of the repairs pipeline companies will complete if drain tile is damaged is determined on a case-by-case basis with landowners. Guidance documents, such as the Ohio Pipeline Standard and Construction Specifications document (a voluntary set of measures to help reduce damage to property during construction), do exist, however.

But Ferbrache says the document that holds most weight is the contract negotiated between the landowner and pipeline company at the outset of a project.

This document will include stipulations about the nature and quality of repairs to drain tile, and at what point the repairs can be done following construction.

He says keeping land in agricultural production is to the gas companies’ benefit: land that is maintained by farmers does not need mowing, for example – or drainage. “Maintaining the tile has a long-term benefit for the pipeline’s longevity,” he says. “Pipeline companies have an interest in maintaining that agricultural tile. If groundwater starts to rise, you want to have drain tile at 24 to 36 inches carrying that moisture away, because it’s so heavily compacted after the pipeline goes in.”

Jimmy Stewart, president of the Ohio Gas Association, says the pipeline companies doing work in Ohio have a good understanding of the importance of drain tile to agricultural operations. Most companies follow the recommendation set out in the Ohio pipeline standards document.

In addition, he says, pipeline companies talk to landowners early on about the size, location, layout and direction of all drain tiles on the property, as well as their collection outfall, composition and approximate depth. They also ask who originally installed the drain tile field.

Recently, a Nexus drain tile mitigation plan crossed his desk; the company, a joint venture between Spectra Energy and DTE Energy, is proposing a new pipeline in Ohio.

“In the Nexus drain tile mitigation plan, the company states that they are responsible for the costs associated with mitigating and repairing drain tile impacts from construction-related activities,” he says.

“They also state in their plan that drainage systems will be restored to at least the equivalent of their pre-construction condition. Any repairs and restoration to drain tile systems conducted by the company will be monitored for three years, or until restoration is considered successful, to ensure the system functions properly.”

Tips for contractors
Hamman says that if drainage contractors are contracted by pipelines to do the work up front, or are hired later, there are a few considerations to bear in mind.

“One of the biggest tips is to check all your Utility Protection Service tickets, and get the phone lines and electric lines marked before you dig, because the gas lines run through more populated areas,” he says. “Sometimes they’ve put a high voltage underground electric or fibre optic lines around the drain tile. Old existing gas lines and other utilities could be mismarked.”

Bridges designed to keep drain tile from settling and shifting off-grade when pipeline is installed may be of particular interest to contractors hired by gas companies. Watershed Materials is currently marketing one called the Mad Dog Foam Bridge and Timewell Drainage Products distributes Tile Bridges.

Ferbrache says it might be a good idea for contractors to get a sense of contracts signed between landowners and gas companies before beginning the work, and potentially seeking legal representation in case something goes wrong.

But Hamman says contractors’ main task is to pay attention to the task at hand. “We’ve been working either directly for landowners or pipeline companies, and the deals the two of them have don’t affect us,” he says. “We’re out there to fix the tile and do it right.”