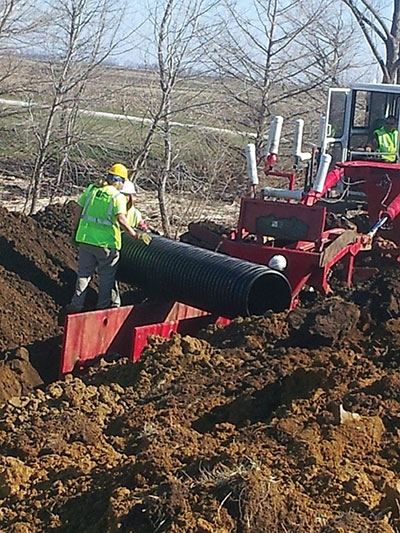 A new storm water drainage system being installed at the Monsanto Company Learning Center will provide more efficient field drainage, resulting in more consistent results in its development of new seeds and crops.

The first phase of the drainage system, which uses a grid pattern of corrugated high-density polyethylene (HDPE), has now been completed and the remainder is scheduled for installation in the fourth quarter of this year.

“We’re in a pretty flat area and with soils that tend to hold moisture very easily, which is good for production, but we just have to get rid of the excess water,” explained Eric Hickenbottom, North American Corn Breeding testing operations manager for Monsanto. “There are a lot of roads through the research farm which are higher than the fields and act as a dam trapping the water, so we don’t get a lot of surface runoff and need to drain it with tile. After large rain events we have water standing in those areas, sometimes for a week at a time; it would take that long for it to drain. What we hope to achieve is to have those major wet holes drained in 24 hours, at least the visible water sitting on top of the ground. That’s our end result objective.”

“For nearly 50 years, farmers have been using corrugated HDPE pipe for draining their fields,” said Daniel Currence, P.E. director of engineering for the Plastics Pipe Institute’s CPPA division. PPI is the major trade association representing all segments of the plastic pipe industry. “Tile drainage is critical to crop production because it allows excess water to leave the soil. This provides a higher yield for a farm. If not for this system, many fields would be flooded and totally unusable. Tiling saves those fields and increases crop production.”

“Spacing of the pipe for this project was a little tighter than usual,” Currence added. “Typically, you’ll find the rows spaced 30 and even 40 feet apart. Here, because of some of the areas being prone to standing water, the pipe was installed with 20-foot spacing: about 2,000 feet of lateral pipe an acre. Water in some areas gets trapped in there like a pool.”

To install the 88-plus miles of pipe, Timewell’s construction division, Ag Drainage Inc. (ADI), plowed both the mains and the laterals. Depths ranged from 7.5 feet for the mains to 30 inches for the laterals.  No additional bedding was used. Installation work took a crew of 10 one week to complete.

“Because the pipe used for the laterals comes in long coils and is fed on the plow, the installation is rather quick,” noted Currence. “For example, three-inch diameter, perforated tubing that was used on this job comes in a reel that has 6,200 feet. That makes it efficient to get to the field and install.”

With an average annual rainfall of 38 inches, the research farm near where Iowa, Missouri and Illinois meet has mainly silt loam soil.

“We did have some areas that were tiled many years ago in grid pattern and probably put in a little too far apart, and maybe a little too deep,” said Hickenbottom. “Also, the mains weren’t sized big enough. We want adequate moisture but not a lot at one time. Typically with the way weather patterns have changed here during the past 10 years, we’re seeing heavier rainstorms with more frequency. In a dry year we can handle five inches of rain without a problem and it drains. What happens is that a week later we get another five inches and it’s so saturated we can’t get rid of the water.”

“We are a research facility so we have many, many special projects out here on the farm,” he added. “And quite truthfully, a lot of times, those projects, whether it is a breeding effort or something of that nature, those crops tend to be a little bit higher in value versus just a commercial field,” he said. “If we lose it, there’s potential to lose maybe a year or more of progress with our breeding and yield testing programs. So we went with a pretty aggressive drainage coefficient for the farm… There were 488 acres there that we wanted to get done.”

The center has research labs, classroom training and plot tours. Hickenbottom and his team do advanced research in corn, and some of the other business functions at the site have corn and soybean research testing projects, along with many demos that the learning center plants and harvests every year.

“It’s important that we have proper drainage, which I’m sure we’ll now have,” said Hickenbottom.

Related
The relatively new world of bioreactors
Managing runoff
How to tile a bin yard for drainage
Learning curve: controlled drainage on a slope