May 15, 2015  By Debra Levey Larson/University of Illinois 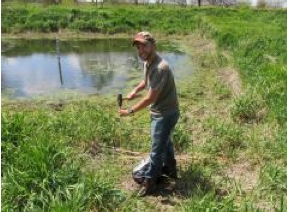 U of I graduate student Tyler Groh marking greenhouse gas sampling sites in a wetland on the Embarras River in Illinois. Wetlands created 20 years ago between tile-drained agricultural fields and the Embarras River were recently revisited for a new two-year University of Illinois research project.

May 14, 2015, Urbana, IL – Wetlands created 20 years ago between tile-drained agricultural fields and the Embarras River were recently revisited for a new two-year University of Illinois research project.

“Slowing down the rate of flow of the water by intercepting it in the wetland is what helps to remove the nitrate,” said Mark David, a University of Illinois biogeochemist in the College of Agricultural, Consumer and Environmental Sciences. “The vegetation that grows in the wetland doesn’t make much of a difference because the grasses don’t take up much nitrogen. It’s just about slowing the water down and allowing the microbes in the sediment to eliminate the nitrate. It goes back into the air as harmless nitrogen gas.”

David was involved with research on these same wetlands from 1994-98 but didn’t take any measurements after that. He has spent much of his career studying the runoff from tile-drained fields and methods to reduce losses of nitrate and phosphorus. The runoff, particularly nitrate, from fields in the upper Mississippi River basin, is believed to be the major cause of the hypoxia in the Gulf of Mexico.

“The USDA requested proposals on the effectiveness of wetlands and woodchip bioreactors to reduce nitrate losses from fields, but was also concerned about greenhouse gas emissions,” said David. Working with graduate student and lead author Tyler Groh, “We found the greenhouse gas emissions were really quite low. Nitrous oxide was not a problem. The other good news is that this research confirms that wetlands really do work to reduce nitrate runoff, and they work long term.”

David says that, along with fertilizer management, cover crops, and bioreactors, wetlands are an integral part of the Illinois Nutrient Loss Reduction Strategy. Building a wetland costs about the same as installing a bioreactor. One of the reasons David prefers wetlands to help solve the nitrogen pollution problem is that they work reasonably well in the winter when the water temperatures are low.

“Farmland along the river may be flood prone, but depending upon the landscape, it could be farmable land,” said Lowell Gentry, senior research specialist and co-principal investigator on the project. “In this case, it was pasture so the wetlands didn’t reduce the row-crop acreage, and the landowner was able to use it as hunting grounds. Our project included funds to build new wetlands, but we couldn’t convince anyone to do it. Wetlands have been a hard sell.”

“Farmers generally prefer to install bioreactors because they don’t take up much space,” Gentry added. “A wetland requires about three to four percent of the drainage area. So, for a 100-acre field, you’d need about four acres in wetland. Although bioreactors don’t use up much land, they also don’t slow the water enough during high flows. Research on their performance is still underway. Because water tends to be in the wetlands for a much longer time period, they are more effective.”

David says there has been a push from environmental groups for years to build more wetlands to help lower the nitrate levels. There are a few in the Lake Bloomington watershed but not in the Embarras River watershed, even after all this time.

“No one wants to mandate a certain practice – wetlands, bioreactors, cover crops, adjusting the timing of applying fertilizer – all of these things that we know help reduce nutrient loss,” David said. “But, because of this research, we know that wetlands are a long-term nitrate removal method that keeps on working with little greenhouse gas emission. By building a wetland, farmers have an opportunity to make a substantial nitrate reduction in the transport of nitrate from their fields to the Gulf.”

The research was partially funded by the United States Department of Agriculture’s National Institute of Food and Agriculture. It was conducted by Tyler Groh, Lowell Gentry, and Mark David; the team’s findings were published in the May/June issue of Journal of Environmental Quality.