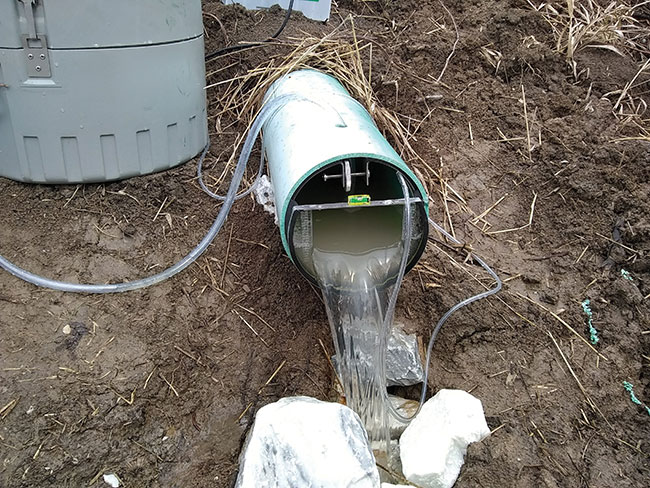 More than two years of water data were analyzed to help determine the impact of best management practices and tile drainage. All images courtesy of Joshua Faulkner.

Effective field drainage is a key strategy for farmers in the Lake Champlain Basin, and has been for decades. As environmental concerns surrounding agriculture increase, researchers in Vermont are working to understand how tile drains impact field hydrology and the role they play in surface and subsurface nutrient loss.

From Feb. 1, 2019 to Jan. 31, 2022, Joshua Faulkner, Don Ross and Kirsten Workman from the University of Vermont studied how best management practices affected the health of the Lake Champlain watershed. They installed two edge-of-field surface runoff monitoring stations on a Vermont corn silage field within the Basin.

“The primary objective of this study was to monitor tile drainage outflow and how much phosphorus was leaving the field on a per acre basis,” says Faulkner, a research assistant professor with the University of Vermont.

Other objectives included learning how much water is coming into tile drains through soil cracks and how changing rainfall patterns impacts the amount of phosphorus transported into tile drains.

In a recent presentation on the study called “Increasing our understanding of tile drainage hydrology and phosphorus losses in subsurface and surface runoff in the Lake Champlain Basin,” Faulkner said they’re seeing an escalation of tile drainage installation due to excess moisture in Vermont.

“Tile drainage is probably the number one adaptation practice that farmers are using—row crop farmers, dairy farmers and some vegetable farmers—to adapt to climate change,” he tells Drainage Contractor. 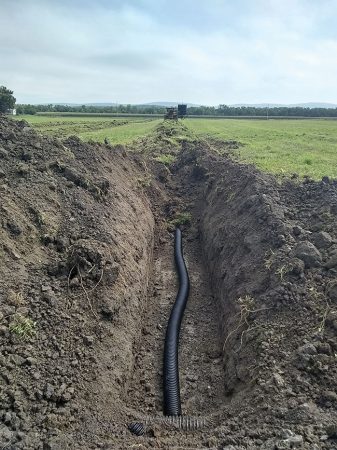 The reality for Vermont’s farmers
In the research seminar, Faulkner said the Champlain Valley has experienced an annual precipitation increase of seven inches over the past 30 years.

“With wetter growing seasons, farmers are responding and investing in tile drainage in order to keep their fields drier in the spring, summer and fall,” he said.

According to Vermont Dairy, dairy farming makes up about 70 percent of agricultural sales in the state, totalling $2.2 billion in economic activity. For these farmers, tile drainage is primarily used around feed and forage production for cattle.

As important as tile drains are to farming, there are also environmental concerns regarding the impact of agriculture on watersheds. Nearly half of the total phosphorus load measured at the watershed outlet is attributed to tile drains.

“We are starting to see phosphorus export from our tiles and it is raising eyebrows and causing us to intensify our monitoring efforts, and take on new research to understand the magnitude of these phosphorus losses in tile,” Faulkner said. “As agricultural soil and water topics go, it has been a fairly hot topic in Vermont over the past few years.”

Heather Darby, an extension professor at the University of Vermont, has conducted surveys with farmers in the Lake Champlain Basin around tile drainage and nutrient management plans.

“The survey results indicated that tile drainage was really allowing farmers to adopt the conservation practices for water quality that we’ve been promoting, things like no-till and cover cropping, because they keep the soil drier in the fall,” says Faulkner.

He adds that an important point often missed in the conversation around tile is the fact that tile drains leave the soil drier, which means the risk of compaction is lower so farmers are more willing to do conservation tillage. 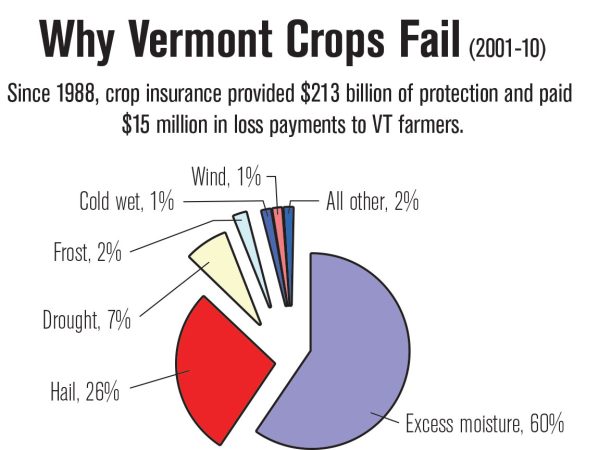 Excess moisture remains the predominant cause of crop failure in Vermont, more than any other environmental factor. Chart by UMV Extension Commercial Horticulture, RMA, 2012.

Gathering the data
For this specific study, Faulkner monitored two years worth of data, analyzing discharge and phosphorus loss and assessing the impact of best management practices and tile drainage. Surface and subsurface runoff was collected on two sites, the treatment watershed, which utilized no-till and cover crops, and the control watershed, which practiced tillage and no cover crop.

“In terms of phosphorus leaving the fields, we’ve seen that we’re really kind of within the normal range of what would be expected,” he says. The data showed between one pound and 1.5 pounds per acre per year was being transported from the fields. “It’s not through the roof and it’s not this huge environmental concern that some have thought it may be.”

“With climate change and more of these extreme events, the need to address phosphorus in tile drainage will probably increase because we see those heavy rainfall events in our soils that have the big cracks and the macro pores. Those storm events are leading to more phosphorus loss than smaller events, the less intense events.”

‘Money down the drain’
While the data showed the amount of phosphorus loss through tile drains was only a small fraction of what was applied to the field, it revealed nitrogen losses were much higher than researchers expected, around 70 to 100 pounds per acre per year.

“That’s money down the drain, to be honest, for the farmers,” says Faulkner. “Certainly we don’t want to ignore it from an environmental perspective, but farmers from an economic perspective should really take notice. That’s motivation to change how they manage their nitrogen in tile drained fields.”

From this research, Faulkner says understanding how tile drains impact nutrient losses is important for both farmers and drainage contractors.

“Tile is a really important tool for farmers, but we need to use that tool responsibly. Maybe we can think more carefully about where we put our tile drainage outlets, maybe put them in places where we have some sort of buffer capacity between the outlet and the nearest waterway; some chance of removing the phosphorus or the nitrogen,” he says.