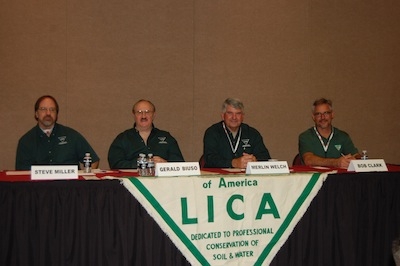 The 2013-2014 National LICA Executive Committee. From left to right: Steven Miller Land improvement contractors from across America ventured into the desert on March 1 for the 63rd annual National LICA Winter Convention.

March 10, 2014, Las Vegas, NV – Las Vegas has it all – beautiful weather, a plethora of restaurants and plenty of fabulous nightlife and entertainment options. But on March 1, land improvement contractors from across the United States had another reason to venture into the desert.

The 63rd annual National LICA Winter Convention, held from March 1 to 3 at the Riviera Hotel & Casino in Las Vegas, saw delegates from more than 15 states gather for collaboration, networking, and a bit of fun. The convention kicked off on Saturday evening with an executive committee meeting, and delegates broke bread and mingled over a breakfast sponsored by Petrocon. Committee meetings began Sunday morning, with delegates breaking off into their respective groups to discuss such topics as education and technology, by-laws, conservation, water table management and safety and insurance. With discussions about legislative visits, association growth and membership drives and water quality issues, committee members worked to share ideas to better the association.

During lunch on March 2, sponsored by Case Construction Equipment, Dan McNichol gave an entertaining and informative presentation about his tour across the United States to highlight America’s ailing infrastructure. The afternoon concluded with regional and budget meetings before an Associates’ Night reception.

Day three of the conference began with a hearty breakfast, sponsored by True and Associates’, followed by a delegates meeting during which Gerald Biuso, the chief executive officer of the national association, welcomed North Dakota as the newest state chapter of the association. Biuso announced his commitment to adding 1,800 new members over the next three years and 10 months, focusing on Texas and Maryland. More fellowship and camaraderie followed during lunch, sponsored by John Deere, before volunteers rallied to gear up for ConExpo-Con/Agg. The rest of the afternoon and evening brought more fun and entertainment with an indoor racing activity and a reception, sponsored by CNA, and dinner, sponsored by Caterpillar. Several LICA members were honoured with awards at the dinner. Congratulations to all winners:

After a full few days at the national convention, delegates took in the sights and sounds at ConExpo-Con/Agg. The national summer meeting will be held July 14-19 in Indianapolis, IN.