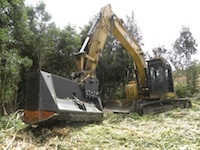 There are four model ranges in the Seven E series, fitting hydraulic excavators from five to 40 tonnes, with mulcher widths of three, four, five and six feet. Wood material up to a maximum 10 inches can be mulched. Fixed and variable displacement hydraulic motors are offered. www.sgc-group.com