Improvements in efficiency the key to improving overall performance. 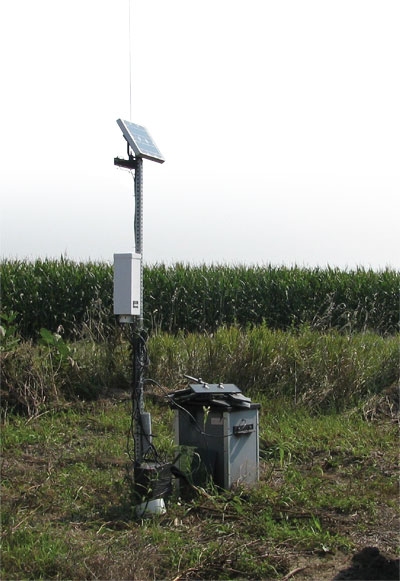 The bioreactor at work. According to the results of practical application studies that commenced in Illinois during 2009

According to the results of practical application studies that commenced in Illinois during 2009, the use of a farm drainage system made from corrugated high-density polyethylene (HDPE) pipe, along with a new bioreactor, can help to stem the amount of migrating nitrogen while increasing crop yield. Managing the nitrogen, a residual of fertilizer, before it travels with water from the fields and is carried downstream has been one of the goals of the project. The Agricultural Drainage Management Coalition (ADMC) is leading the ongoing research with support from other organizations such as the Agricultural Watershed Institute (AWI) and the Plastics Pipe Institute, Inc. “We’ve been looking at drainage water control structures and bioreactors where the drainage water control structure helps to direct the nitrate flow through the unit,” states Steve John, executive director of the AWI. “We’ve been working on that issue in various ways for quite some time. It certainly involves work to try and manage fertilizer as efficiently as possible and not apply it at rates exceeding recommendations. There have been some projects using inhibitors. But it’s pretty widely accepted that corn fields are going to lose nitrogen. And, that on some tile-drained farms, nitrogen will be found in the system. Since 2006 we’ve been focusing on ways to address that.”

Tile drainage is critical to crop production because it allows excess water to leave the soil. “A tiling system pays back better than anything else you can spend money on for the farm. It’s just unbelievable what it does,” says Garry Starkey, who has a farm in eastern Illinois. Together with his brother, he grows corn and soybeans on land his family began farming three generations ago.    “We’ve been tiling our farms for years. It’s extremely wet here. Some people told us when we first moved here 10 years ago that they didn’t get planted until June. After tiling we can plant anytime, which we prefer to do during April.”

He currently has some 640 acres tiled.

Starkey is also concerned about the levels of nitrogen. “The bioreactors have been able to collect nitrogen and cut down on the amount that is lost,” Starkey explained. Studies calculate the reduction to be as much as 90 percent.

His tile system is installed using perforated HDPE pipe three feet underground. “Any deeper and you get into the subsoil and it won’t draw as well. You want to keep it as shallow as you can but not so shallow where you might hit it with the tillage equipment. We have very dark, natural prairie grass soil with the topsoil running about two feet deep. The worst thing is that it holds water and that’s why you need to drain it. You get it to drain, and you really have something good.”

The good, however, does come with the downside of having the water carry off some nitrogen with it. Collecting it and controlling it is now possible because of the HDPE tile drainage system and the bioreactor. “The tiles are a pathway for nitrates to leave the field,” says John. “I view it as a process of recognizing it as an issue, quantifying it as an issue, and then developing the industry, farmers, land owners and conservation organizations to effectively deal with it. I view drainage water management and bioreactors, and additionally, wetlands and saturated buffers as all potential ways to deal with nitrogen in tile water. It starts with trying to manage the fertilizer as effectively as possible. But even with the most conscientious efforts in fertilizer management, some nitrogen will be lost, so developing a way to deal with the nitrates once they reach the tiles provides a highly beneficial and environmentally positive solution.”

PPI’s executive director, Tony Radoszewski provides his perspective. “The situation is similar to the one we all faced with vehicle pollution. To solve the problem, no one was willing to give up driving. But solutions were developed such as emission controls on cars and more efficient fuels.

“Today, no one wants to give up eating. Drainage systems are required to get the yield from a farm. If corrugated HDPE pipe wasn’t being used on farms today, fields would be flooded and unable to produce anywhere close to the same level of crop. As a matter of fact, some would raise none. And there are treatment methods readily available to modify the amount of elements in the runoff.”

One of the industry manufacturers who is leading and helping with the study is Steve Baker of Springfield Plastics, a PPI member company. Baker is the chairman of the PPI’s Corrugated Polyethylene Pipe Association (CPPA) division’s agricultural committee. “Using drain water management techniques helps to hold nitrogen and phosphorus on the farm.

And that’s the whole issue. For a farm field that has a bit of slope to it, structures such as dry dams or terraces can be put in so that when the water runs off it can be slowed down and the silt is kept on the farm. That’s a typical conservation practice,” explains Baker. “But when you have land that is flat as a pancake, and there’s no water running off, those fields must be tiled. When you tile them, they are very high producing. Some of the best corn and soybean crop land in the world is here in the United States being drained with underground pipes. The water percolates through the soil and if it has nitrogen, it goes into the pipe. The whole idea is to get rid of the excess water, it runs through the pipe and off the farm. The drainage water management practice that we’ve studied with the ADMC and the AWI has shown that when we keep the water up here at the right time, we keep that nitrogen here. We have studied and put to the test sound drainage water management practices and the bioreactor. This combination works.”

The bioreactor unit helps to remove nitrates from the water carried in the tile drainage system.

One of the researchers leading the program is Dr. Richard Cooke of the Department of Agricultural and Biological Engineering at the University of Illinois, Urbana-Champaign. “The bioremediation technology works at the end of the system by removing elements in the water through the metabolism of stationary micro-organisms as the water flows past,” he states. “The bioreactor consists of a buried trench with woodchips through which the water flows before entering the surface water. Micro-organisms from the soil colonize the woodchips. These micro-organisms eat the carbon from the woodchips and take in the nitrate from the water. Just as a human being breathes in oxygen and exhales carbon dioxide, these micro-organisms breathe in nitrate and exhale nitrogen, which exits the bioreactor and goes into the atmosphere as an inert gas. Through this mechanism, called the denitrifcation pathway, nitrate is removed from the tile water before it can enter the surface water.”

Baker notes that tests show a substantial result. “The research and a program of ‘in-the-field’ studies show that when the water flows in it might have 20 milligrams of nitrogen per liter, but when it comes out, it will have just two milligrams. And the research is very strong for totally reducing the nitrogen loss.”

According to Baker, the Plastics Pipe Institute’s members are supporting the research efforts. “Our industry is behind it 100 percent.”

The PPI Agricultural Committee is made up of corrugated HDPE pipe and resin manufacturers and others to work with various organizations such as the ADMC and the AWI. “Our work as the Agricultural Drainage Management Coalition and task force has gathered scientists, chemists, famers, fertilizer manufacturers, conservationists, environmentalists and university researchers and teachers to develop sound drainage water methods and this bioreactor,” adds Baker.

Even the bioreactor was designed with environmental considerations. “We’re using woodchips,” Baker explains, “instead of taking live trees. It’s all dead wood mostly from storm damage that is going to be chopped up anyhow. Why throw a match to them; use them for something constructive.”

“The main question farmers ask,” according to PPI’s Radoszewski, “is ‘Will a tile drainage system using corrugated HDPE pipe help my crop?’ The answer is an emphatic ‘yes.’ It’s a proven fact that crop yields are improved. The next question is ‘Will adding drainage management tools and the bioreactor help the environment?’ Again, the answer is ‘yes.’”