May 21, 2014  By Drainage Contractor administrator 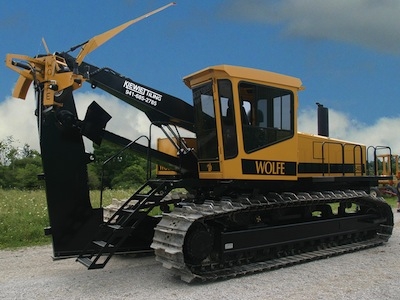 Wolfe Equipment has added new upgrades to the 540 drainage plow.

May 21, 2014 – Wolfe Equipment has added new upgrades to the 540 drainage plow. The lift and attitude cylinders are now seven inches in diameter, increasing capacity by 30 per cent, and the two six-inch grading cylinders have been replaced with one 10-inch grading cylinder, increasing capacity by 15 per cent. Batteries in the machine were increased from two to four, taking the machine from 2800 cold crank amps to 5680. The back step was modified to angle away from the mole and reduce the likelihood of damage by the dirt berm.

The oscillating pins are now locked in from the front side, making for easy removal and allowing the pins to stay in place under the machine in the unlock position so that they do not need to be removed. The auxiliary pumps and valves were reconfigured so that both pumps feed a single valve bank, making for a much more efficient use of oil and better performance at low RPM. www.wolfeequipment.com