Information that is retrieved is as useful to contractors and planners as it is to farmers. 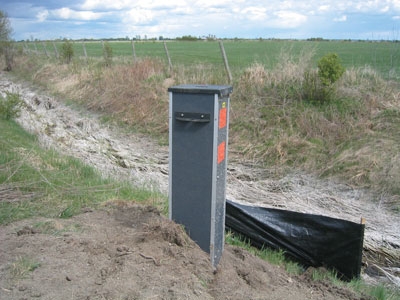 An inline water level control structure used by Mark Sunohara and David Lapen of Agriculture and Agri-Food Canada. Three years can seem like a long time

Three years can seem like a long time, or it can seem as though it is speeding past in a heartbeat.

In 2007, David Lapen and Mark Sunohara began monitoring the effects of controlled-tile drainage along a set of tributaries of the South Nation River in Ontario’s Ottawa Valley. Lapen, the scientific lead, and Sunohara, the project manager for Agriculture and Agri-Food Canada’s South Nation Watershed Evaluation of Beneficial Management Practices (WEBs), were setting out to study agricultural best management practices (BMPs) and their effectiveness in improving surface water quality at watershed scales. Although quick to point out that the concept behind such research has been studied extensively in the US and Canada, Sunohara notes that few have taken such a project to a considerably larger watershed scale, or roughly 1000 acres.

Lapen and Sunohara’s work first attracted the attention of Drainage Contractor, among others, in 2007, with an introduction to the WEBs project. At that point, they had engaged growers along two parallel municipal drains, both within the South Nation River watershed. Originally, they were looking for land bases with similar soil-type and cross-cutting land use (most were dairy farms, with crop rotations of corn, soybeans and forage). “We took one of the drains and installed control structures on all of the tile outlets where we obtained landowner co-operation,” explains Sunohara.

That process of finding co-operators, and planning and installing the control structures took the better part of three years.

Thus producer co-operation and practice adoption was a gradual process.

Three years later in 2010, their efforts of monitoring the watershed are beginning to show some effects. “We’ve been seeing some benefits, both environmentally and economically. Economically, we’ve seen some moderate increases in yields in crops, so the farmers are benefiting from the controlled-tile drainage that way, increasing yields with the same amount of inputs,” says Sunohara. “Environmentally speaking, we’ve seen at least 50 percent nutrient load reductions, and looking at nitrogen, the total mass load of nitrogen being exported from the field, we’ve seen reductions of at least 50 percent, compared to uncontrolled drainage.”

Going forward
In spite of the benefits of tile drainage and controlled-tile drainage, and with the gathering of data to substantiate those stated benefits at watershed scales, the job is to the contractor to convince a farmer or a landowner of the value of such an investment. That is why Sunohara is pleased to see that the kind of BMP work that they are doing is yielding some welcome validation and support from government sources. “In part, because of this project and the work we’ve been doing, controlled-tile drainage is now included in the Canada-Ontario Farm Stewardship Program (COFSP) and South
Nation Conservation Clean Water Program,” says Sunohara, adding that the COFSP program provides a cost-share format worth 30 percent, up to $15,000 for a control structure installation. This is a new and important addition that has come in the past two years, part of a lobbying effort of WEBs, to evaluate and promote BMPs. “What we’ve come up with is that this is a pretty decent type of BMP; it’s low-cost, flexible regarding management of water table, retrofit, easy-to-install, and on a new installation, it’s easy to design into it. The province of Ontario and the federal government have taken that and included it (in their stewardship program).”

On a more local level, the research that Sunohara has conducted and the data he has gathered thus far, have helped convince the South Nation Conservation Authority (a partner in the project) to include it in its Clean Water program, including a cost-share component to provide 50 percent up to $1000 for control structure installation.

Just as important, Sunohara reports that many contractors are doing their part in spreading the message about controlled-tile drainage, acting as advocates in dealings with farmers and landowners, based in part on his research findings to date. “They’re informing the farmers or advising them on the utility of controlled-tile drainage, telling them ‘it’s only a small additional cost to the installation,’” details Sunohara. “Five years ago, adding controlled drainage and controlling the water leaving the field at a critical time wouldn’t be something on their minds.”

And further into the future
The next phase for Sunohara includes continued monitoring and an expansion of the data that can or could be retrieved from this project. “Because it’s on such a large watershed scale, and because of weather variability, we can’t really come up with concrete answers in a short amount of time. So long-term monitoring and benchmarking are the keys to be able to provide definitive answers” says Sunohara, adding that the effects of this practice at watershed scales will differ from those at plot scales. “We are also looking at bacteria and other agricultural drainage constituents, so we’ve been working with dairy farmers in our watershed, where they apply manure in spring and fall, comparing controlled and uncontrolled field situations.”

Another interesting expansion of this research that Lapen and Sunohara would like to see, is moving this work to regions where topography has a greater influence on installing tile and controlled-tile drainage. Sunohara concedes that their work has been done on relatively flat land, where controlled-tile drainage will work effectively on the whole field. “On a sloping field, you’d have to install tiers of control structures in your drainage system to manage the whole field effectively.

So let’s evaluate controlled-tile drainage on less appropriate areas, or areas that need a bit more of a design factor involved,” explains Sunohara. “I know that Agri Drain (manufacturers of control structures) have been working on this tiered system and it’s totally subterranean, so that farmers don’t have to worry about control structures in the middle of their field. We hope to explore these systems in the context of the WEBs project.”

Most of all, Sunohara wants contractors to understand that their project is continuing, that more data is being farmed from the yields, and the testing parameters (namely, the export of nutrient resources from the fields) are being expanded to bring greater value from controlled-tile drainage.

For further reading and reference: