Precision surface drainage may be a solution for stressed subsurface systems. 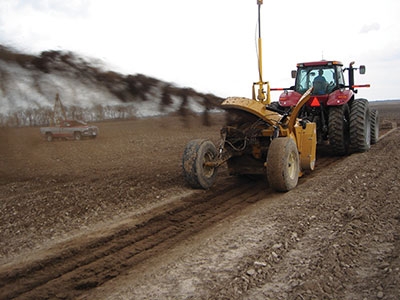 While drainage technology has been improving the productivity of farmland clear across the continent, the Cisne soils of south-central Illinois have stubbornly resisted progress. But the Wendte family has proven more persistent than even the land itself.

Leon Wendte was armed with a degree in agricultural engineering and 33 years of experience when he retired from his position as New Hampshire’s state engineer for the Natural Resources Conservation Service and came home to the family farm. His brother, Roy, was growing more than 5,000 acres of corn and soybeans near Altamont, Ill., and surface draining the farm exactly the same way farmers have for centuries in that part of the state.

Tile drainage is impossible in this area, thanks to glaciation and natural geology, says Wendte. First, there’s an impermeable clay pan layer about 18 inches below the soil surface and second, he says, there’s no more than one to three inches of slope for every 100 feet of land, which really offers water no place to go. “Where most farmers put in tile to lower the water table, we have to rely on evapotranspiration,” Leon explains. Their only other alternative is to grade surface ditches at the same slope most contractors would install a tile drain or lateral. But even the most experienced struggled to maintain margins of error less than a tenth of a foot, grading surface ditches with whatever machine might be available. In years past, farmers have used spade and shovel, mold board plow, and tractor-mounted blades, box scrapers, or small rotary ditchers. On the Wendte family farm, this meant approximately 500 acres remained improperly drained. So Wendte looked to precision implements for improvement.

Equipped with a Wolverine rotary ditcher and laser controlled hydraulics, Wendte has installed three- to six-inch deep, five-foot wide, flat-bottomed, surface ditches on over 300 acres in the last three years. He says he slopes the banks on a 10:1 ratio, “so that you can drive a sprayer across it at 12 to 15 miles per hour and not even feel it,” and focuses on the worst fields first. But Wendte also accredits his brother Keith with providing a critical piece of their precision surface drainage system: the topographic maps he uses for planning.

“All our tractors have autosteer and on our farm we’ve found it cost effective to install our own base station, so we generate our own RTK correction factor accurate to one inch or less,” Wendte explains. Using Case IH AFS desktop software, their ‘As Planted’ records, and aerial photos, Keith saved the family hundreds of dollars in survey costs, and it only took him a few days to pull everything together.” So for all 100 fields that we have, I have topographic maps accurate down to a two or three inch contour line just waiting to be used,” Wendte says.

A lot of time goes into planning his drainage systems long before any earth is ever moved. Wendte follows natural drainage paths on the maps Keith made, taking into consideration wet areas identified during scouting, in field histories, on aerial photos and indicated on yield maps. He plans laterals from wet areas to the main ditches to carry water off the field. An AB guidance line is created on the maps for each surface ditch so that when installation begins the exact location and alignment of the channel is transferred from the maps to the field. All of which, he believes, a drainage contractor would find pretty instinctive.

“Any tiling contractor can use the laser equipment and smarts that they already have to install a drain over the surface of the land, in addition to the tile that they install below the soil surface,” he says. He thinks that if more contractors combined surface drainage with subsurface work, everyone would save more money on their field drainage. “When you have a wet field, it is far more economical to drain whatever water you can off the surface with a surface drain than it is trying to install tile and let the water that’s ponded on the surface infiltrate through the soil and then out through the tile.”

He knows some contractors realize this, but not all. In defense of those who never give much thought to surface drainage, Wendte admits that some fields will not lend themselves to be surface drained. Surface drainage wouldn’t work on prairie pothole soils, for example, where depressions can fill up to two feet deep. But he insists that his family is getting the same benefit from their surface drainage system that they would with systematic tiling at a fraction of the cost, and contractors who can learn to use precision techniques on the surface will, in his opinion, offer customers more bang for their buck.

“The combination of surface drainage and subsurface drainage is by far the most cost-effective and best working system you can have on a wet field,” Wendte says. “Just let your tile work that much more effectively, remove more gallons of water off your field in a shorter period of time, and take the pressure off your tile.”