Who is it protecting? 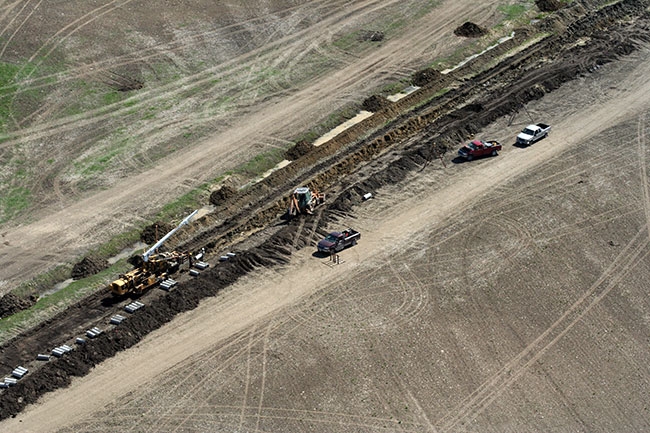 Ontario is the only Canadian province that has a licensing program for drainage contractors. By far the most agricultural tile is installed in Ontario, and the program ensures Ontario contractors are highly skilled.

However, some say there’s confusion about the purpose of the regulation, particularly as more farmers are buying unlicensed equipment for the purpose of installing tile on their own land – and sometimes their neighbor’s, says Jamie Turvey, president of the Land Improvement Contractors of Ontario (LICO). Does the licensing program exist to protect contractors or farmers?

The program, established under the Agricultural Tile Drainage Installation Act, came into effect in January 1973. Its goal has always been to protect farmers from bad workmanship, says John Johnston, secretary of LICO.

In 1973, Johnston was the Drainage Engineer at OMAFRA. “[Up until] that point in time, anybody could put tile drains in place. People who didn’t have experience could offer themselves up as a contractor,” he says.

“You had people buying bulldozers and putting on a vertical blade and cutting land like a knife through butter. There were a lot of farmers spending money on systems that wouldn’t work.”

In the early 1970s, a number of experienced contractors documented problems with tile drainage systems across the province and made a presentation to the Minister of Agriculture requesting regulation. “They said, ‘We need to do something about this because there are a lot of investments being made that farmers won’t be able to recoup, and it’s giving us a bad name,’” says Johnston. Their request was granted.

The machine license ensures that every new model of drainage equipment that comes on the market goes through a series of tests to make sure it is capable of installing tile to the proper grade and tolerances, and in a variety of soil types. Once it passes all these tests, the machine is licensable; when contractors approach the ministry requesting a license for the machine, it is approved.

The operator license works like an apprenticeship program – there are three levels. Class C entry-level machine operators’ licenses are offered to contractors after they’ve worked in tile drainage for 60 days; the license allows them to work under the supervision of contractors with Class A licenses. Class B licenses are granted once the contractor has logged 250 hours and completed a five-day drainage course. This level of license allows operators to work independently for three hours before checking in with a supervisor.

To achieve a Class A license, contractors must log a further 250 hours (500 in total) and pass an eight-day course plus verbal and field tests to ensure their understanding and to show they can apply a system’s design criteria.

Business licenses are issued to owners with a licensed machine and at least one Class A operator.

“We have an inspector who performs some of these tests, like the field test for the A operator and for the new machines,” says Vander Veen. “We also inspect new businesses to make sure everything is operational.

“If there’s a complaint about workmanship, we’ll send an inspector out to inspect the system. If there are workmanship issues, the contractor has to either fix the [problems] or we hold a hearing before the director, who has the authority to suspend licenses.” Vander Veen says compliance is excellent in the province, and the Ministry hasn’t held a hearing in more than 20 years.

When the Ministry finds incidents of unlicensed contractors, infractions tend to be minor, and the Ministry goes through a process of “progressive compliance,” he says, educating operators about the law.

There’s an important exception to the licensing requirements: if farmers wish to install tile on their own land, they’re allowed, says Johnston.

Who’s protected?
Steve Cronsberry, owner of Marquardt Farm Drainage, says the licensing system is very important for maintaining the high quality of tile drainage systems installed in Ontario, for both the farmer and the contractor.

“For example, if a farmer drained his own farm without the knowledge gained through the licensing program, how does anyone know it was installed properly?” Cronsberry says. “Then, if the farm is sold, the new landowner may be purchasing a farm with a defective drainage system.”

But the reason for the Act needs to be clarified to all stakeholders, says Robert Hall, who’s on the board at LICO. Hall says that until a recent meeting where the subject came up, he and some of the younger contractors had always been under the impression that the program existed to protect contractors and make sure there was a standard for the quality of the workmanship.

“The contractors talk at the meetings about how the program isn’t protecting them from unlicensed contractors doing work, but the mandate is to protect farmers,” he says.

In recent years, there’s been an uptick in farmers purchasing unlicensed tractor-mounted plows that aren’t designed to meet performance standards in order to install their own tile.

Turvey says this is creating resentment in the contracting community, for several reasons. First, the equipment isn’t up to snuff: “It’s the difference between a shovel and an excavator,” he says. “This equipment works for random tiling but not real-world systematic drainage.”

Second, a growing number of farmers are using the equipment to install tile on their neighbor’s land, and a lack of enforcement means these operators are getting away with breaking the law. Fines are as low as $500 per infraction, says Turvey, but as far as he knows nobody has ever been fined.

So far, “there’s no way [for OMAFRA] to convict someone unless they catch them in the act. There aren’t enough people to enforce it and by the time they get to the job site it could be two weeks too late,” he says.

Turvey says fines need to be updated so farmers are deterred from purchasing unlicensable machines for doing custom work. But he believes the best way to protect farmers is to close all the loopholes in the law that allow unlicensed operators to install tile on anyone else’s land. “The contractors feel they’ve done everything they should do to get their licenses, but people who aren’t licensed are able to install tile at will,” he says. “They’re doing a disservice to the farmers by not enforcing the laws.”

Cronsberry echoes this. “I think we need to have a licensing system where anybody putting in tile has a license,” he says. “All of the unlicensed pull-behind equipment and installers should be licensed, so that everything is being installed properly. Everybody thinks that just putting tile in the ground means you’ll get good drainage, but there’s a science to it.”