It’s been a challenging year for many industries, but the drainage world has kept on producing – which means Drainage Contractor keeps producing content as well!

Here’s a look back at the biggest stories of the last year – that give us an idea of where the field might be going in 2022.

In early 2021, we introduced the Funding Fact Sheet, a regular round-up of drainage funding news. Many of these focused on municipal allocations for infrastructure drainage, however the Funding Fact Sheet has also provided resources for those seeking funding for drainage upgrades and other projects that improve overall water health.

In terms of major news items, jurisdictions such as North Dakota and Ontario have updated drainage rules in order to save on red tape, eliminate bureaucratic costs and make it easier install drainage.

But, at home and abroad, drainage remains a controversial practice – especially given accelerated urgency in the conversation around climate change. In some areas, such as Ireland, the U.K. and the EU, laws or recommendations have taken aim at drainage for its negative impact on water health. Nevertheless, some farmers have shot back or expressed that they feel targeted, and many groups have stated that drainage doesn’t have to pose a net harm on the environment, and indeed can have a positive impact if done correctly. As such, we take a deeper dive into some of our favourite features and initiatives of the year:

Ehsan Ghaine of the University of Michigan knows all too well that spacing matters. Now, he’s developed a tool to help contractors, landowners, engineers and designers understand and apply that knowledge. When tile is spaced too tightly, it can have negative economic impacts and hurt the environment. When it is too far apart, it does not provide effective drainage. The tool is open-source and applies to farmers in the Midwest in areas such as Michigan, Indiana and Illinois, but can also be used by farmers in Southern Ontario. Factors such as soil conditions and lot shape are taken into consideration and allow designers to get an idea of their ROI based on spacing.

Read more about the project here. 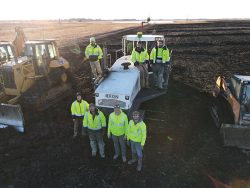 The crew at Nohl Tiling, who split their time between tiling and the farm.

Drainage contracting, and more broadly agriculture in general, sometimes has a succession problem. Additionally, fewer younger workers coming into drainage can often mean the field begins to fall behind in terms of applying all the innovation and technological advancements that have been developed over the years. But cousins Corey and Taylor Nohl prove that there’s still plenty of youthful spirit pushing drainage practices forward – and they’re not afraid to embrace technology. From their early days steering the equipment from their dads’ knees to now convincing the elder Nohls to embrace new technology, Corey and Taylor share with Drainage Contractor what drives their business, and how their experience as farmers makes them better contractors. 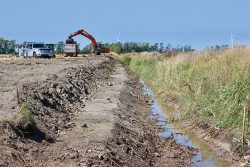 It was another year of extreme weather – but new advancements and better understandings of drainage design and layout show that even though the rain may pour, there’s nothing a contractor can’t fix. Our November feature looks at how farmers are effectively combining surface with sub-surface drainage systems in order to deal with an influx of water, and how it applies in different parts of North America – both in terms of environmental impacts and economic impacts.