Reviewing the accuracy of RTK-GPS installations. 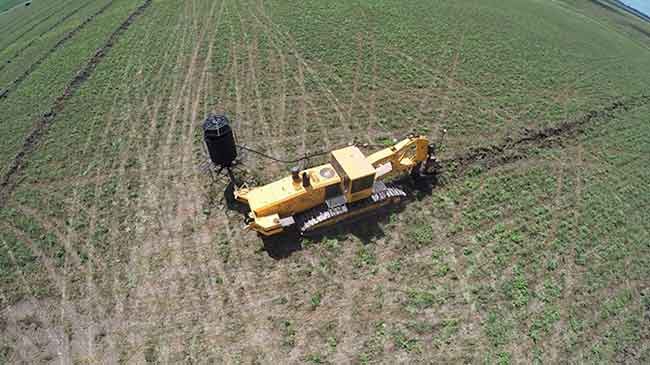 The 2016 Inter-Drain 2050 GP shown with three RTK-GPS receivers. In the hallways at Land Improvement Contractors of America (LICA) conventions

In the hallways at Land Improvement Contractors of America (LICA) conventions, outside the classrooms of drainage workshops, and during informal conversations amongst contractors and vendors, the topics of RTK-GPS accuracy and plow capabilities are frequently discussed.

It’s not uncommon for contractors to provide their opinions on plow types and the pros and cons of various methods of installation. It’s also recognized that there are no formal industry tests or certifications required of a professional contractor’s operators, machinery, or computer control systems in order to install subsurface drainage tile (corrugated-wall plastic drainage pipe) in the United States. In Ontario, by contrast, there is a certification program in place for drainage plows and contractors. To my knowledge, there are no pull-type plows certified for contractor use in Ontario. We mention this not to speak out against pull-type plows, or new technology, so much as to highlight an interesting point: these frequent conversations amongst contractors are not just to pass the time, rather they allude to a very important but often unspoken concern across the industry: just how accurate and capable are our drainage installation machines, controller systems and operators?

So it was with surprise and enthusiasm that I accepted a request from Jim Fouss to help explore these issues. Fouss was concerned that no testing and/or certification of drainage plows or contractor-operators had been adopted in the U.S., especially as modern drainage plows are capable of operating much faster than in the past. I thought the results would be of interest to all contractors. I was also excited to work with a pioneer in the use of laser-beam and plane technology in the drainage industry. Much of Fouss’s early work focused on developing and testing laser technology for machine control, especially the drainage plow. He mentioned to me that he was surprised to see such broad acceptance of the use of GPS technology, when there was so little university- or industry-based research and testing reported in the literature; just decades earlier, the adoption of laser-plane technology faced tremendous uphill battles and required demonstrated proof that it worked. “I guess people were just more suspicious of new technology back then,” Fouss said to me. I mentioned that I thought there was significant interest in the topic by contractors, and we decided to get to work.

In brief, Fouss’s idea was to propose and pilot a testing process for the evaluation of RTK-GPS-based drain installations. We decided to make our focus twofold. First, we would focus on developing a process to identify potential differences between elevations recorded based on the cutting blade position of the drain plow and the feeder boot position (the position where the pipe is actually installed). Second, we would focus on deviations between the RTK-GPS drainage system design data and the RTK-GPS data recorded during installation. In this article I will discuss our efforts to evaluate the former.

Digging into the details
Many new drainage plows are now fitted with two RTK-GPS receivers: one on the tractor for steering and one above the cutting-edge of the plow blade for grade control. Different drainage plows are often fitted with different size and shape cutting blades or “shanks” and pipe boots. There are also numerous configurations for attaching the boot to the cutting blade. In general, the idea is that the blade will act as a rudder, pitching up and down in the soil to cut a trench bottom at the correct elevation, while three additional things happen: a groover forms the appropriate trench bottom for the pipe type and size being installed; a ramp or angle lifts and grates the soil to create finely milled initial backfill; and a pipe boot floats behind the plow blade in order to lay the pipe in its desired location at the bottom-center of the grooved trench. This freedom of movement between the boot and the blade is important, as it allows the boot to maintain a position on the bottom of the plowed-trench as the blade articulates during grading. The configuration and shape of the boot are critical to correct installation, trench bottom, and backfill.

But is the back of the boot always on the bottom of the trench? And is the trench bottom always at the same elevation as the plow blade was when it made the trench-bottom cut in front of the boot?

In order to pilot a process for answering those questions we deployed a third RTK-GPS receiver mounted directly above the pipe chute on the pipe boot. Fouss proposed this approach in an article published in the November 2014 issue of Drainage Contractor. We recorded real time RTK-GPS data during installation of drains for the cutting blade position and the pipe chute position. We then graphed and subjected the data to statistical analysis in order to evaluate the magnitude and significance of any deviations between the blade and boot elevations. We did this for a number of drain lines of varying lengths, and occasionally varying depths, installing the drains both up and down grade, plus various installation speeds with emphasis on the higher speeds, and across a few soil types. The trials were conducted during dry summer conditions in predominately silt loam and silty clay loam soils underlaid with significant clay restrictive layers.

Sample data
For this article, we have chosen two sample graphs indicative of result from the trials.

Figure 1 shows drain installation accuracy on the scale of hundredths of a foot. This is indicative of exceptionally accurate and precise RTK-GPS sensing equipment, coupled with extremely precise machine control, grading and boot placement.

Figure 2 shows plow blade and boot position data for a segment of changing grade drain installation. The graph shows the elevation of the pipe boot and plow blade for a number of positions along the drain line to be very precisely in synch.

Assessing the data
We also plotted the latter graph with an expanded Y-scale (e.g., 92.4 to 93.6) to better illustrate the differences between the plow blade and pipe boot RTK-GPS plotted data. After data collection and analysis, we were pretty amazed and pleased with the consistency and accuracy of the RTK-GPS equipment, as well as the precision and ability of the plow boot to maintain an appropriate location at the bottom of the cut and formed trench during pipe installation. We expected to encounter more anomalies in the data, but they just weren’t there. However, we need to add that a similar field-based evaluation should be done for other types and configurations of drainage plows.

Looking ahead
As noted previously, particular plow configurations and soil conditions may impact results. However, the technology to readily test and verify installation practices to a very high degree of precision and accuracy does exist. As plow speeds increase, equipment and technology evolve, and installation practices change, Fouss and I suggest that a certification program of some sort be adopted by the industry. It is also our intention to discuss the results of our continuing analysis of drain versus actual installation in the May 2017 issue of Drainage Contractor.

This article was written in partnership with James (Jim) Fouss, PhD, P.E.
Print this page