Research in the Red River Valley explores the benefits of conservation drainage systems. 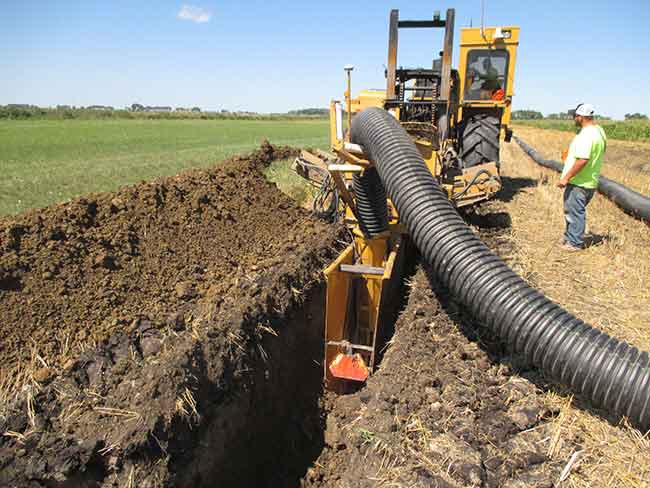 Installation of a portion of the main line. Research in the Red River Valley explores the benefits of conservation drainage systems.

There are concerns about how subsurface impacts water quality, movement and distribution. In the Red River Valley – a region that includes North Dakota, Minnesota and Manitoba – landowners, along with local, state and federal government agencies, agricultural businesses and the University of Minnesota, are working together to tackle these concerns.

The Red River Valley Drainage Water Management Project consists of two field sites approximately three miles apart in Wilkin County, MN, on Jared Nordick’s corn and soybean farm. The first site is 156 acres divided into three sections: a control section with surface drainage only; a section with controlled drainage and potential sub-irrigation; and a section with conventional subsurface drainage. The second site is 65 acres with two zones managed with controlled drainage and a third zone with a saturated buffer.

North Dakota’s Tightline Drainage installed the belowground drainage components and structures on both locations in the fall of 2015 so researchers could compare the controlled drainage, conventional subsurface drainage and surface drainage only systems, and document the benefit of a saturated buffer.

“We are encouraging people to do more on this sub-irrigation work but there is no real data if it works or not, so this will give us some real data,” says Myron Tschakert, a sales representative with Tightline Drainage.

Nordick agrees this data will be beneficial to help show these systems work. “Farmers don’t want to spend an extra penny on fertilizer, pesticide or insecticide so it will be good to have the scientific data to say these are the facts,” he says.

To help get that data, researchers installed systems in the spring to monitor the sites for aspects such as: surface runoff; subsurface drainage flow; rainfall, air temperature and air humidity; soil moisture content and soil temperature; nitrate-nitrogen in surface runoff, subsurface drainage and through the saturated buffer; field management; and the time and management required for controlled drainage.

Jeppe Kjaersgaard, a research scientist with the Minnesota Department of Agriculture who is involved with the project, says they are looking at two different systems – controlled drainage and the saturated buffer – for this research, but “there are other methods out there as well that contractors and producers might want to look into.”

Controlled drainage
“The way controlled drainage works is putting in a control structure at the outlet of the drainage system so we can adjust the outlet elevation. That way we can hold water back within the root zone during the times of the year where we don’t need to drain water,” Kjaersgaard says.

By holding some water back within the root zone in late spring after planting, there is more water available to the crop later in the growing season, which may increase yields. “The idea here is during the fall, after the crop is harvested, we can drain water out, if there is any excess, into ditches and streams when their flow is lower, creating more water holding capacity within the soil for the spring when the risk of flooding is greatest. Without this system, the water drains freely and we are less able to manage when and how much water is leaving the field,” Kjaersgaard says.

“Producers want to keep as much of the nutrients they are adding to their crops on the field as they can and prevent them from getting into the water,” he adds. “Once the nutrients get into our lakes, they can cause algae growth and lead to oxygen removal from the water, which is harmful to fish and aquatic life. Elevated nitrogen concentrations, in the form of nitrate, are also a public health concern.”

Controlled drainage systems are typically installed with new drainage systems and on sites with little slope. Kjaersgaard says it works best with typically half per cent of slope, but can also be designed for use on sloping terrain. Because the system can also be used for sub-irrigation, the drainage lines are spaced 15 meters apart, which is narrower than the typical spacing of 20 to 25 meters on these soils, Kjaersgaard says.

Saturated buffer
The second method the researchers are looking at is a saturated buffer, which can be retrofitted on an existing system or on more sloping terrain. With this method, a buffer strip of vegetation such as grass, brush or, in some cases, trees, is utilized for the management of water flow and water quality. With the controlled drainage method, the researchers add to the traditionally designed tile system that drains directly into a ditch, stream or other waterway, installing a diversion box in the buffer and running the distribution line parallel to the stream for a distance.

“The idea is, rather than the runoff going directly into the stream, to move it out into the soil in the buffer. The water then moves through the soil towards the ditch,” Kjaersgaard says. He explains buffers of 10 or 20 metres in width are commonly used. “What happens, because the drainage water now is not going into the stream directly, it slows down the movement of the water without changing the efficiency of the drainage system to remove water. That way we can flatten out the peak in runoff amount, which in turn helps with flood mitigation, while maintaining the drainage efficiency.”

Some of the water is also taken up by the vegetation and evaporates from the buffer. As the water moves through the soil, bacteria remove nitrate and turn it into nitrogen gas that is released harmlessly into the air.

Installation of a portion of the main line.

Research results
Now that the systems are installed, the researchers collect water samples using automated water samplers and analyze them for nitrate-nitrogen. They also collect meteorological information using an automated weather station located within two miles of the sites, which enables them to calculate crop water use and will help them establish the field water balance. And while they have not yet collected enough data to definitively say how the systems work or what impact they have, there are some early results.

“In the field without tile drains, there is some loss of phosphorus and low nitrogen loss,” Kjaersgaard says. “When we put in subsurface drainage, it switches, so we see a much lower phosphorus loss, but an increase in the nitrate-nitrogen loss.”

This is important knowledge considering it is phosphorus that drives environmental issues like algae blooms in bodies of water such as Lake Winnipeg and Lake Erie. “From an environmental standpoint, putting in drain tile typically reduces the loss of phosphorus compared to surface runoff,” Kjaersgaard says.