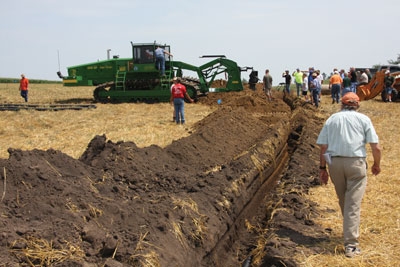 Summer means different things to different people but for drainage contractors, it is a call for two things: get the equipment ready for the busy fall season, but before that, head to the fields for a nearby field day. For a group of Iowa contractors, that field day took place July 27 at the Midwest Construction Expo and Field Day, near Melbourne.

“We have a lot of success stories we can share when it comes to conservation and water quality in Iowa,” said Chuck Gipp, the new deputy director of the Iowa Department of Natural Resources.

Many of the success stories to which he referred include waterways and tiling, as well as terraces, and all were showcased at the 80-acre field day site. The day’s events were sponsored by the Iowa Department of Agriculture and Land Stewardship, the Marshall County Soil and Water Conservation District and the Iowa Land Improvement Contractors’ Association.

Gaining support from cities and state
More than just contractors and farmers were attracted to the field day. Since Melbourne is so close to Des Moines, the event provided an excellent opportunity to showcase best management practices to both urbanites and state lawmakers.

“This field day shows how farmers and contractors are true conservationists who are making great strides as they integrate new technology to save Iowa’s soil and protect water quality,” said state representative Annette Sweeney.

Among some of the displays visited by attendees were a rain garden constructed by LICA members and grass waterways, which can help manage rainwater flow from farmers’ fields and reduce or prevent erosion. The site was also the place for the unveiling of a new tool for contractors. Known as Nancy’s Blanket, the design consists of two sheets of biodegradable plastic mesh with straw sandwiched between. The blanket can cover a newly installed and seeded waterway, to give the construct a good start and minimize erosion. “Often the seed is washed away by the first rain that falls after the waterway is built, and the wind can blow away the straw mulch that some contractors spread over the new waterway,” explained Scott Hamman, whose family created Nancy’s Blankets. The concept has been in use in Ohio since 2005, and it is now being distributed in Iowa by Plunkett Farms from Maxwell.

“The field day is a great opportunity to learn about the newest ways to help preserve our soil and natural resources,” said Keith Rohwer, who manages Dry Run Farm Drainage, and also grows corn, soybeans and raises hogs and horses near Paullina.

Additional research
One other facet that was covered at the field day dealt with the Conservation Reserve Enhancement Program wetland
on the site, something that contractors built in 2009. The CREP initiative has been developed – with the help of both state and federal governments – in an effort reduce the nitrate levels in water coming from tile drains on farmland. Research from Iowa State University has confirmed that CREP wetlands are capable of removing 40 to 90 percent of nitrates from tile drainage water. The research indicates more than 90 percent of herbicides are also removed. At the time of the field day in July 2011, the state of Iowa had about 80 CREP wetlands.

In addition to wetlands, other conservation measures, including grass waterways, filter strips and reduced tillage, can make a significant difference. Individuals such as Chuck Gipp see these efforts as a huge step, and believe voluntary moves, not regulated ones, are the better way.