Features Contractor at Work
Seeking out the Top Performers 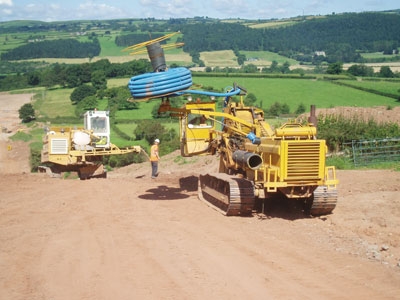 A Mastenbroek 26-15 chain trencher and CT12 tracked gravel cart work in Wales on remedial drainage for a new gas main. In a first for the industry

In a first for the industry, Nuffield scholar and British drainage contractor Rob Burtonshaw is traveling the world to learn about and promote land drainage. Through his travels, he plans to meet with like-minded people to share ideas and learn about new technology, innovations and practices from drainage representatives and some of the industry’s top performers.

A third-generation land drainage contractor, Burtonshaw recognizes most of his drainage knowledge came from his father and grandfather and says, “I suspect I could have no better tutors, but other perspectives and experiences are undoubtedly valuable as well.” So, his desire to learn more about the industry and drainage practices led him to the first Nuffield Scholarship award focused solely on land drainage. A prestigious honour, Burtonshaw received one of approximately 75 Nuffield scholarships worldwide awarded in 2012. Studying land drainage and its role in farming’s future, the scholarship provides travel funds for a year for Burtonshaw to bring new ideas back to Britain’s farmers and drainage industry.

Focusing his travels in North America, Burtonshaw believes more research projects on drainage are being conducted in Canada and the US, when compared to Europe. He’s already visited the Netherlands, Canada and the US, and will return to the US in fall 2012. “I’m keen to see innovation and practices that are new to me, as well as seek out the industry’s top performers,” says Burtonshaw. He’s pleased to say he’s learned something new every time he meets someone and has observed that, while all contractors do the same task, each performs it in a slightly different way. However small, he says, improvements can add up. In an early observation, Burtonshaw noted most drains are still installed with laser guidance in Europe and he is eager to speak to contractors in North America about their experiences with GPS grade control and bring this technology practice to Britain.

“Clearly there is an awful lot of pipe being put in the ground in North America, and strong demand for drainage will help to drive competition and improvements,” says Burtonshaw. His biggest surprise so far has been the scale of agriculture in North America when compared to Britain: the field sizes in Britain are a fraction of the size in comparison.

Applications on the home front
“I want to make improvements,” says Burtonshaw. “I’d like to learn how to lay drains faster, more accurately and at a lower cost.” The Director of Farm Services Ltd. based in Lighthorne, Warwickshire, UK, Burtonshaw says it’s vital that any business move forward and advance, and he hopes to apply some of his research to his own company. He also has plenty of opportunities to speak to British farm groups and industry representatives about the new developments and practices he encounters in his travels.

Burtonshaw is confident there is always something to learn from others, and using this philosophy as his approach to his studies, he’s sure to achieve his goal of bringing as much information as possible about land drainage back to Britain’s farmers and drainage industry. He encourages anyone who might have information to complement his studies to contact him at rob@farmservicesltd.co.uk.