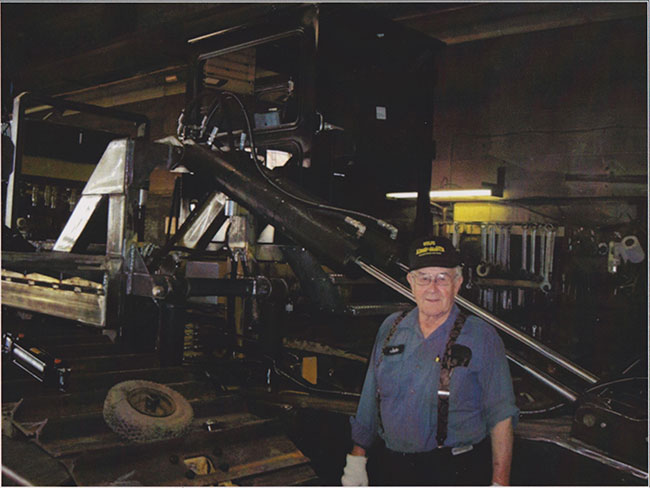 John Wolfe Sr. is the name behind the eponymous Wolfe plows and was one of LICO’s first honorary life members to be inducted.  He was well-known and respected among farmers and contractors across North America because his plows were strong and dependable, and he offered exceptional service.

Doug Inglis, a retired contractor from Earlton, ON, remembers Wolfe fondly. His father, Rod Inglis, met John in the 1950s at a drainage meeting when they were both young men starting into drainage contracting, and they both ran Buckeye 301 ditchers. John farmed and installed field tile with his brother Grant, but he always liked the machinery side of the business. He started manufacturing parts for drainage equipment in his shop, quickly developing a good reputation amongst Ontario contractors for great service.

In 1967, he launched Wolfe Equipment and eventually sold trenchers and plows as well. He was featured in Drainage Contractor magazine in a 1978 article titled ‘Service is the Salesman’ and at that time he was manufacturing parts for Buckeye, Barth and others, as well as selling their trenchers and plows. The article concludes that Wolfe “will surely continue to be a leader in Canadian land drainage in the years ahead.”

In fact, he would go on to be a global leader.  In the late 1970s, he bought a plow design from Advanced Drainage Systems (ADS) and reworked it into the Wolfe single parallel link machine. He kept the design simple and overbuilt the components, so the unit was heavy and never short of horsepower.

Ken McCutcheon, a drainage contractor near Thorndale, ON, bought one of the first five plows that came out of Wolfe’s shop in 1981. “John built them tough and simple,” says McCutcheon, “There wasn’t a thing on that plow I couldn’t fix myself.” Doug Inglis bought a Wolfe plow in 1982 and it is still going, he says.

“They just worked,” says Bob Manske of A&E Construction Supply, who sold the majority of Wolfe plows in the U.S., more than 200 plows and power units. “They would go years without seeing a warrantee claim,” he adds, and Manske says 20-year-old plows are still selling for the same amount they were bought.

Manske met Wolfe in 1983, and that year he did nine demos and sold eight Wolfe machines. Thus began a long friendship and strong working relationship between the two. In the early 1990s, they began co-manufacturing ‘Wolfe-Man’ trenchers and got away on several fishing trips over the years.

“I’ve never met a man with more integrity and honesty. He was strong in his beliefs,” says Manske, who considers Wolfe his mentor, and together they helped to build the American market for plows. According to Peter Darbishire, former editor of Drainage Contractor, there had been a lot of resistance to adopting the plow in the U.S. in those early days, with claims that the plow caused soil smearing that impeded drainage. But over time, the increased speed and reduced cost of plow installation won farmers and contractors over.

As for service, McCutcheon says there was countless times he stopped by the shop after hours for parts. Even for Inglis, Wolfe would get parts to him on the next bus to New Liskeard, ON. “John always answered his phone,” McCutcheon adds, noting that Wolfe dealt directly with Ontario contractors himself and never missed a drainage conference. Wolfe was genuine, friendly, well-connected to his customers and helped several young contractors into the business by financing their plows himself. He built trust and his handshake was as good as gold.

Both McCutcheon and Inglis worked with Wolfe to get his trenchers going in Egypt. They worked with the Canadian International Development Agency (CIDA) around 1990 to bring seven Wolfe trenchers to the Nile Delta. The goal was to reduce salinization that was impacting farmland up to 30 miles inland from the Mediterranean Sea. McCutcheon went back and forth five times doing performance testing and Inglis ran a five-week training course for local operators. Drainage was successful there and a 30 percent increase in yields was measured in the first year alone.

Ron Schlatter, who deals for Wolfe from Indiana, adds that there were many sides to John Wolfe and a number of personal tragedies that his family faced.  “I wish everyone could see the side of him that I knew,” says Schlatter, who swapped books and phone calls with him for years, even after the business was sold.

“They were simple and durable, but John wasn’t about the bells and whistles.” Wolfe worked with his children for several years before they sold the company to the Veeke family in June 2012, and the new owners added the technology built into today’s Wolfe plows.

John Wolfe Sr. was one of many extraordinary individuals who built and supported the drainage industry to what it is today. He will be remembered by many.